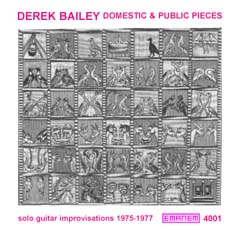 All analogue recordings made in London
Total time 67:24

I use the guitar normally. It's tuned normally. I work on, sort of, certain pitch relationships, when I use pitch. I work from a practical point of view. That is, the music to be acceptable as far as I'm concerned, has to work in my terms. That is, it has to sound right. I don't have any sort of huge abstract theories into which I try and make the music fit regardless of this other aspect of playing - if it sounds good when you're performing, then that's the main thing. It's got to be immediate - that type of thing. That I think is a very conventional way of approaching music for a performer.

Derek Bailey (b. 1930) spent more than a decade playing in dance bands before deciding to concentrate on free improvisation in the mid-1960s. He had thus acquired a comprehensive ability in "conventional" guitar playing, to which he added all the "unconventional" techniques which he subsequently discovered. Between the two, he probably knows more about the guitar, and can get more out of it, than anyone else.

More important, though, is the fact that he is one of the finest improvisers around, both in solo and group contexts. He is one of very few musicians who seems to have an endless supply of new ideas which enable him to be continually inventive, as can be heard here and elsewhere.

This disc documents some of the different instrumental approaches that he has used. In his early free work, he used a six-string guitar with pedal-controlled amplification. This allowed him, among other things, to instantly control the volume of each note sounded, and also to vary the volume during the course of a sound. One use of this technique meant that notes could fade in and/or end abruptly, in direct opposition to what happens naturally.

In 1972, Bailey added another loudspeaker and another volume pedal to his guitar, enabling him to throw sounds around stereophonically. This was the principal instrument used in the concert from which the EIGHT PUBLIC PIECES were extracted. He performed two extended improvisations using this stereo set-up - FIRST and SECOND are extracted from the first, and FIFTH, SIXTH, SEVENTH and EIGHTH come from the second.

In order to break up the concert, there was a section between the two main pieces featuring his then "other" guitar. This had started life off as a twelve-string, but, thanks to Bailey's enhancements, had grown to carrying approximately nineteen strings. It can be heard played through a practice amplifier on THIRD and FOURTH. Also heard on these two tracks are a Waisvisz Crackle Box played by members of the audience, an amplified thundersheet, and a tape recorder that suddenly came to life.

Shortly after this concert, Bailey decided to stop using two-pedal-controlled stereo amplification, mainly because so many other people (not just guitarists) had followed his lead in this direction. He was also somewhat fed up with having to lug so much equipment around. He therefore decided to concentrate on what he was unbeatable at, namely, playing the guitar.

Another reason for largely dropping electricity was his acquisition of a couple of 1930s six-string guitars that are remarkably loud, having been designed to be used in dance bands before the advent of amplification. Most of the DOMESTIC PIECES feature one or other of these guitars, although some feature the previously heard six-string without amplification.

"Derek Bailey is no longer a jazz musician, though he is an improviser - if improvisation is considered to be spontaneously defining one's own area of activity. After a long career as a studio, commercial, and dance band guitarist, in the 1960s he began developing a personal technique and aesthetic, creating a unique instrumental sound and logic. Listeners comfortable with the extreme instrumental sonorities in music be Xenakis, say, or early cut-up experiments of musique concrète, may not be shocked by Bailey's music, and in fact close listening reveals techniques resembling those in the stark, abrupt, resonant string music of the Japanese koto, the Chinese ch'in, and the Korean kayagum. But Bailey's music is usually more abstract than those. The sound of his guitar, amplified or acoustic, is inevitably percussive; notes are struck and muted, chords plucked and allowed to decay or are splintered into oblivion. Taking an early concern with unorthodox intervals from an interest in Webern, Bailey has added a textural component rich in chiaroscuro and impasto effects. Microtones collide, phrases unravel and fray. The air around the music blisters.

The chiming, scratching, and twanging - full of gristle and friction, or the cool whisper of tenderness - is brought out in greater relief on DOMESTIC & PUBLIC PIECES, a reissue of solo recordings from 1975-7. The music, and its presentation, seem consciously theatrical, and a few ironic readings of text, along with some environmental soundplay, make Bailey seem like a British eccentric - which he may be. However, as disturbingly fragmented and haphazard as the sounds may appear (at first hearing anyway), they are not random or thoughtless, though accidents (or rather incidental occurrences) happen. There is an undeniable intelligence in evidence, a careful plotting of choices, and eventually the music grows intensely meditative even at its most aggressive."

"Bailey's acoustic variations are primarily swirling, as dodecaphonic-flavoured lines and striking intervallic designs are awash in clusters, chords and sounds. Switching to electric guitar and two volume pedals these concerns are underscored by layered phasing and ringing effects. There's also a bit of random, noisy interplay for a nineteen string guitar, an amplified thunder sheet, a tape recorder and a small home-made synthesizer, and several pithy (and delightful) recitations. If not comprehensive, this set is certainly an evocative overview of Bailey's mid-'70s work."

"Bailey's purposeful attack rings every ounce of harmonic density of the guitar on this release. Despite first impressions that this is a very cerebral music, the sheer physical dexterity required to pull this much out of a guitar belies the idea. Bailey also connects with other influences in his solo format: hear the shimmering gamelan effect on the haunting Queue. Surprisingly, this is a very danceable free music, Bailey creating a rhythmic calliope that swings along invitingly. In other places the music gets very free indeed, pushing the edges of a listener's ability to comprehend pitch relationships. This is a strong sample of Bailey's mid-seventies style."

"Particularly interesting are the four rather wonderful voice/guitar pieces; a neglected and still underrated sub-genre within the Bailey canon. DB's deadpan voice-overs, juxtaposed by the ornate complexity of his strange harmonies, unexpected cadences and bluesy note-bending, produce hilarious results."

"The guitarist himself recorded the first eight tracks at home, the 'domestic' pieces of the disc's title. Bailey's technique is so divorced from conventional referents that even such sweeping terms as 'abstractionist' and 'pointillistic' become hopelessly inadequate in encapsulating his methodology. In Bailey's hands the guitar is a patient under the knife. The fat and gristle of harmony and melody are excised cleanly in equal measure leaving a raw skeletal surface of tensile bone beneath. Though the surgeon behind the scalpel is arguably among the most proficient at his profession his means to an end is still often brutal both in terms of execution and ultimate outcome. His technique often pokes and prods at the ears leaving a wake of both bruises and gratification.

From the start of this collection onward descending tangles of prickly strummed shapes vie with glistening glass-like shards and droplets as Bailey gouges purposely into his instrument worrying the strings with ferrous fingers and a bent logic. On Unity Theatre he cuts and pastes a recitation from the narrative of a newspaper clipping detailing the demise of a favourite venue for British improvisers. His deadpan delivery of the facts surrounding the aftermath of the debacle, which bring to my mind the laconic musings of William S. Burroughs as recited by Michael Caine for some reason, is perforated with more stringent strumming. The lyrics to Roots, though cloaked in the guise of homage, serve a derisive jibe at the supposed supremacy of American origins in improvising music. Bailey's exaggerated sighs between fractured phrasings point like signposts to his true feelings on the subject.

The next eight pieces are gleaned from an ICA concert recording from the earlier year. With the addition of a second volume pedal and loudspeaker Bailey was able to volley sounds back and forth between speakers and increased both the range and reach of his instrument. The jagged barbs harvested by Bailey with the acoustic instruments of the earlier domestic pieces are replaced with lubricious streaks and smears. Third and Fourth signal another shift in instrumentation with Bailey putting a personally modified 19-string guitar through a series of rigorous paces. Curiously, on both of these pieces Bailey's fretwork is at its the most accessible, despite the sporadic intrusion of ear-excoriating feedback. On the Third Bailey strums vitriolically at his thicket of strings and, in the woollier moments, sounds as if he will spring them from their housings. Toward the close of Fourth Bailey can be heard muttering 'Perhaps I should explain what's happening here'. Attendant laughter from the audience targets the absurdity of such a pursuit and it feels as if any explanation would prove as inadequate as the adjectives I'm attempting to attach to the music. The concluding Happy Birthday To You appropriates excerpts from a Simone de Beauvior treatise on the entropy of the human body and is a weirdly perfect capstone. This was Emanem's initial CD release and it's wonderful to have it back in print and widely available once again."