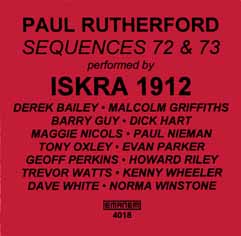 What is not well known, because it has not been documented hitherto, is that Rutherford was also a highly talented composer. From time to time, he organised large ensembles, or wrote for other groups such as the London Jazz Composers' Orchestra. The band heard on this CD, Iskra 1912, only existed in the recording studio on two occasions and never performed in public - and until now, the unique, magnificent results have not been published.

Some general comments: Although there are three trombones, Rutherford himself is not heard as a trombonist, but only (only?) as the composer and conductor. The scores were generally loose frameworks to be interpreted by a group of musicians, who were primarily improvisers, under the direction of the composer. The intention, very successfully realised, was to create a sequence of varied textures, some of which featured improvising soloists. Perhaps the most unique aspect of the ensemble sound results from the use of two (wordless) vocalists and no percussion. (Tony Oxley, who appears on the 1973 piece, only used live electronics.)

The principal soloists on the 1972 piece are Evan Parker (initially unaccompanied), Kenny Wheeler (over an almost static backdrop) and Trevor Watts (initially just with Barry Guy). There is also a quartet section featuring the two vocalists, piano and bass. For some of the time the three trombones and the tuba act as a fully composed choir-like section, at other times they are free to improvise. The final climax comes when the tuba enters to bring an all out collective improvisation to an orderly close.

A year later, the same musicians (apart from Tony Oxley replacing Watts) gathered in the studio to perform a somewhat different piece, which seems to go through more textures than previously. Once again one can hear Parker unaccompanied (this time on tenor saxophone) and Wheeler soaring over the ensemble (in a more active mode). There are also some spots featuring the then Howard Riley Trio (with Barry Guy and Tony Oxley), while the brass section functions much as before.

The major difference in the 1973 piece is due to Derek Bailey's stereo amplified guitar being overdubbed at an additional session a week later. Thus the first two minutes, and a later interlude feature Bailey unaccompanied, while at other times the guitar interacts with the prior recorded ensemble. (To be pedantic, this should be called Iskra 1912 Plus One or Iskra 1913!)

About half the musicians involved are stalwarts of the free improvisation scene - and some of these are also composers as well. The rest are generally to be found in the worlds of jazz and/or the studio. However, all were adroit enough at both improvising and interpreting to successfully realise Rutherford's intentions. The compositions were, after all, put together with these specific musicians in mind.

A Paul Rutherford CD would somehow not be complete without some of his own trombone playing, so an extract from an unaccompanied concert performance has been added as an interlude between the two ensemble pieces. This is from the infamous occasion when he was booked to perform a well known composer's solo trombone composition, but he decided that the resulting music would be better if he improvised somewhat rather than play the piece literally. By the latter half of the solo, heard here, there was very little connection with the original composition, but there was much good music.

However, the major revelation of this CD is that Paul Rutherford was one of the few composers who can write pieces for improvisers that do not sound contrived or pretentious. It is too bad that it took decades for an example of this music to be published - but better late than never.

"I think that SEQUENCES might be the finest of the Emanem historical releases so far. A powerful and prophetic example of conduction - I had no idea that PR was composing like that in the 70s."

"Rutherford composed the music for two lengthy large ensemble pieces, but only performs on the solo trombone number sandwiched between them. The big band works are among the finest examples of free jazz composing for a large group. Of course, it helps to have virtuoso performers such as saxophonist Evan Parker, trumpeter Kenny Wheeler, guitarist Derek Bailey, and bassist Barry Guy. Still, the changing textures, organically developed harmonies, and meticulously composed structures lay a wonderful framework for the soloists. Highlights include plenty of Derek Bailey's overdubbed amplified guitar, some splendid piano from H oward Riley, and an outstanding contribution from Evan Parker. Rutherford is particularly fine at blending the vocals of Maggie Nicols and Norma Winstone, which adds extra depth. Rutherford's solo piece is short but very much welcomed as a bonus number."

"If anyone tells you that the 'first wave' European improvisors are like 'fish out of water' in a compositional setting, you just hand them this CD. That will end the argument right quick. These masters demonstrate beyond a shadow of a doubt that they are just as comfortable with scores as without. Normally, I like to come off as some sort of savvy reviewer/listener but this just blew me away. So, all I can say is wow, cool, too much, fantastic, far out."

"This record demonstrates the talent of Rutherford as a composer and a very good attempt at structured improvisation. The music unfolds slowly, freely, with anchor points allowing the musicians to stay on track. A wonderful exercise of control from a group of big names in British free history."

"Rutherford's compositional input is deliberately minimal, being designed to facilitate the playing of a large, fairly all-star group rather than to shackle it with formal constraints. He trusts the players to do what they generally do - play very well. The title, SEQUENCES, seems exactly right; what you get is a series of solo or small-group improvisations linked with quite brief but very imaginative passages for part or all of the ensemble. Because of the non-dictatorial approach the music sounds like a a series of beginnings, rather than a formalised music event. No harm here of course: beginnings, played by such a band are pretty engrossing. When the pieces end, it's as if they could have gone on for a long time: they leave a feeling that a lot remains to be said.

There are solos by Evan Parker, Derek Bailey, Kenny Wheeler, Trevor Watts and Tony Oxley, among many others. There's no percussion here: Oxley plays electronics. There's a quartet of Howard Riley, Barry Guy and the two singers, Maggie Nicols and Norma Winstone. It's an unusual sound - even in this context - and works brilliantly.

If I describe this music as predominantly sombre and inconclusive, don't be put off: there is so much going on. And although no-one gets to solo at great length, they still manage to make strong individual contributions. Have we really had to wait so long to learn about Rutherford's talent as a composer for improvisers? The good ones are in short supply, and we can't afford to be so casual about one of the best."

"Featuring a 12-piece of improv pioneers and several versatile modern jazzers who, in following PR's loosely laid framework, superbly integrate pensive small group interplay with turbulent tuttis. Sandwiched between the two big band pieces is an excerpt from a deliciously transgressive Rutherford solo that started out as a Berio piece before unexpectedly becoming a stunningly inventive improvisation."

"A very fine recording. One look at the personnel should make the reason obvious: the talent level of the players is tremendous. Nicols and Winstone rival the lamented Cathy Berberian with their angelic/devilish hoots, hums and hymns, and Parker, Wheeler and Guy are at the top of their games. White also impresses with his bowel-threatening (and beautifully recorded) contrabass clarinet work. Bailey's additions, both in solo and ensemble contexts, are terrific"

"There are two long (25 minutes +) studio tracks from 1972 and 1973. Each is so dynamic as to be almost protean, shapeshifting; if it was a vinyl record I'd suggest you drop the needle anywhere on the groove and it could be a different record every time. The developments aren't sudden or jarring, but they are totally unexpected; shifts in tone and appearance of players that are both utterly natural and wonderfully surprising. SEQUENCES works so well, it seems to almost glow with the warmth of compassion - scarce enough commodity in any case, and certainly hard to translate into music."

"With no drummer, there is no definite pulse and, as so often in Rutherford's music, it is the human voice, wordless on this occasion, which provides the unifying principle. Quite why these extraordinary works have had to wait until now is a mystery only if one chooses to forget how marginalised this music has been and how little critical press its creator has had since they were recorded."