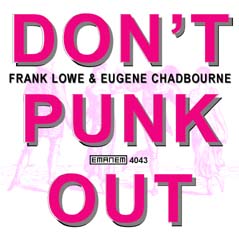 In 1975, I received an unsolicited and unexpected cutting taken from the Calgary Herald. It was a review of the Emanem record by the duo of Anthony Braxton and Derek Bailey written by the paper's staff writer, one Eugene Chadbourne. A correspondence developed, and a second Calgary Herald cutting arrived featuring reviews of solo records by Bailey, Evan Parker and Paul Rutherford. The next thing to arrive was a solo guitar record revealing that Chadbourne was also an excellent musician as well as a superior critic.

Subsequent mail revealed that he was leaving Calgary (where he had been staying to avoid participating in the wanton destruction of Vietnam) and moving to New York City (which was near where I was living at the time). On arrival he teamed up with violinist Polly Bradford and the then unknown John Zorn, and New York City had its first group somewhat influenced by the methods and techniques of the London improvisers.

However, Chadbourne also began working with some of the already established Free Jazz musicians, most notably Frank Lowe and Charles Tyler. By that time, Lowe had become one of the fixtures and leading lights of the New York City Free Jazz scene. After a decade of playing in bands led by Rashied Ali, Don Cherry, Alice Coltrane, Milford Graves, Sunny Murray, Sun Ra and others, he was well on the way to his uniquely individual path, and was leading some remarkable groups both on stage and on record.

In 1977, Emanem was in one of its inactive periods caused by lack of freedom(money). We were investigating some hair-brain tax loss scheme to put out a series of records. All I remember about this was that it involved several long conversations with a lawyer (which we didn't pay for, I hasten to add). Fortunately (with hindsight), nothing came of this, except for one recording session.

When I suggested to Lowe and Chadbourne that they might do a duo for the projected series, they jumped at the idea, and arranged a date when they would both be in the city. (The results didn't come out until two years later, when Emanem managed one of its sporadic gasps of activity.) The session took place in Chadbourne's brother's apartment on the Upper West Side of Manhattan, with the musicians playing in one room and me operating my tape recorder in another.

The musicians came to the session fully prepared and rehearsed. They had decided to make the music as different as possible from the Braxton/Bailey record with its similar instrumentation. They thus decided to go for numerous short pieces, most of which used written material. Lowe also wanted to pay a tribute to the two saxophonists who had most influenced him by performing Ghosts by Albert Ayler, and Fire Down There - the traditional tune from St Thomas (in the Virgin Islands) that Sonny Rollins often used.

This session produced just enough material for an LP. To take the project up to CD length, Chadbourne dug up a 1979 solo tape, while Lowe opted to record some new solos. In a recent email, Chadbourne said the following about his additions (which Lowe titled Inner Extremities Suite for this CD release):

"The history of this tape is that it was made at a drummer friend of mine's loft on the way back from a rehearsal with Frank Lowe. During this rehearsal, the bridge of my guitar snapped and so when we were recording at my friend's I got the guitar to play by shoving a paintbrush under the strings. I was experimenting with using this as a kind of 'whammy bar', but it ends up sounding more like a wah wah pedal. Really weird, but it is an acoustic and not electric effect. I played some new tunes Lowe had just showed me. I never got through the final tune because the guitar went so way out of intonation.

Of course at the time I never thought about releasing these tapes, this was purely horsing around... BUT listening to this now years after the fact, I actually think they would be nice in combination with DON'T PUNK OUT... so much of my stuff from this period is kind of manic but this is pretty relaxed sounding, most likely because of the circumstances."

For the original LP release of DON'T PUNK OUT, I decided to choose the most inappropriate picture I could find. I appear to have succeeded, since neither of the musicians wanted it used again. So the CD cover is very different from the LP, except that I have left a trace of the offending illustration in order to try to appease any original cover freaks.

"The weighty tenor player and the eclectic guitarist perform the original duets (and one solo each) using 16 relatively short exercises in improvised diversity built around basic theme statements. The tunes are uncomplicated starters that allow both musicians to seek alternative paths of diversification in a very short time span. On several of the cuts, Chadbourne's guitar emulates the groaning sound of the tenor in shadowing Lowe's movements, but they go off on tangents from there in very individualistic style. Lowe gets into some very gutteral, near-nasty scenarios as he blows in short staccato blasts. Using tongued outbursts and breathy expressions, he carves the tunes into odd-shaped rows of roughcast blocks while Chadbourne disects them with eerie precision, as would an intent scientist. The concluding solo cuts are deep analyses, allowing each to expound more fully on the material. Chadbourne ranges far and wide in interpreting Lowe's compositions, and Lowe is in fine voice on the recent segment. It is a recording of contrasting musicians who find a common ground for excellent communication."

"Back in 1979, Emanem released this rare example of New York jazz acknowledging an outside source - Frank Lowe and Eugene Chadbourne playing London-sylte 'free-improvised' duets. The approach puts sound-making under a microscope: Chadbourne's guitar is both apt and demented, while Lowe's breathy, understated sincerity is devastating (what a lesson in how to approach Ayler's Ghosts!). A lovely record, intimate and occasionally scorching. Composed melodies there are, though they appear so natural they're like citations in a comversation between two wits."

"Recorded in 1977, this recording finds Lowe in the company of a very young Eugene Chadbourne. As a writer, Lowe is capable of loosely-jointed tunefulness in the manner of Monk, Coleman and Lacy. The opening track here, Composition for David Murray is so effective precisely because it is so candid and song-like in ways the dedicatee rarely is in his own work. DON'T PUNK OUT is actually made a better listening experience by virtue of its slightly clattery mix, as it helps to foreground Chadbourne's contributions, most of which are made on an unamplified instrument. His gnarled, bottleneck flourishes and jagged strumming on a reading of Albert Ayler's Ghosts fall just short of complete and delightful irreverence. Ghosts is a key track here, as Lowe requested its inclusion. His interpretation juxtaposes licks that reference bop and hard bop harmonies as well as tricks out of a rhythm-and-blues bag with Ayler's essentially aharmonic rapidity of articulation. But even in the relatively tight confines of a two-and-a-half minute free duet such as At Reel's End, Lowe and Chadbourne map out some fairly expansive spaces. The events recounted in Fright, while hardly specific, are all the more uncanny for being so. Both men resort often (if tastefully) to the spontaneous extraction of non-tempered sounds from their instruments, and yet these performances are remarkably uncluttered. This is cerebral, even at times 'cool' music."

"True to both musicians, most of the music is manic, punchy, with an intensity heighten by the shortness of the takes. Chadbourne's The Clam is a complete theme-solos-recap jazz tune in 55 seconds! But surprisingly, this duo could also quiet down, as exemplified by Fright and the very nice You Were Right in the First Place. As usual with Chadbourne, there is a strong feeling of controlled sloppiness, although fans will find him more tidy than usual. Not a stellar recording, DON'T PUNK OUT remains an enjoyable album and a good testimony of what these two could do together. The three bonus Lowe solos put the cherry on top of the sundae."

"Predictably quirky, the material includes a mournful version of Albert Ayler's Ghosts and a Rollins-influenced improvisation on the traditional Fire Down There. Some of the duos are extremely short in duration but still manage to pack in theme statements, solos and reprises, on The Clam all within 55 seconds. To flesh out the disc for reissue, Chadbourne supplied some tapes of himself running down some Lowe compositions (on a broken guitar), having just returned from a rehearsal from the saxophonist. The effects heard are acoustic and not electric and seem to have been created by wedging a paintbrush under the strings. Quirky, but oddly effective, and an illuminating contrast to Derek Bailey's approach. Lowe's later contribution is a salutary reminder of how compelling a player he can be."