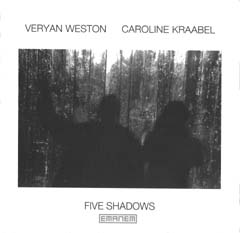 "These recordings are from a series of five concerts that took place in 1999/2000. The pieces are in consecutive order and each performance is represented by one piece, including the first piece from the first performance and the last piece from the fifth performance, thus representing the whole project from beginning to end. Each acoustic environment is interestingly different and effects the way the improvising goes, and the variety of the pianos had an influence as well.

The first four concerts were organised with financial assistance from the Arts Council of England via their Improvised Music Touring Scheme, which was the only support available specifically for improvised music. Unfortunately, 1999/2000 marked the last year of this grant's exixtence, and while we are grateful for the support, we regret the demise of this valuable scheme."

"This is improvisation at its purist and most exposed. There are no themes or preordinated structures and such music lives or dies by the freshness and spontaneous potential of its material.

Equally important is the quality of the dialogue and Weston and Kraabel seem perfectly tuned into one another's thought patterns, aiming for an approach that could be outlines as 'less is more'. Tiny fragments of repetitious material are subtly developed and transformed to build large-scale forms. Though Kraabel's saxophone playing may be too sour for some she always finds interesting note patterns. Each note is put under the microscope and is often treated by slap-tonguing or bending the note. The disjointed and widely spaced notes at first seem obtuse but culminate into originally conceived passages of extended melodic lines. Her playing is often augmented with extraordinary vocalised squeaks that are pitched with devastating accuracy.

Weston's playing is a very natural combination of Monk- and Cecil Taylor-like gestures distilled through his innate musicality, and is vastly engaging. The opening of the third section is especially impressive, as he plays rich and sonorous chords that open up to allow Kraabel to rise to the surface.

Repeated listenings have increased my admiration as the music has revealed more of itself. These results are very impressive."

"FIVE SHADOWS... ghost of recordings rescued from the live arena. Isn't there the danger that recording improvised music will drain its life, leaving only a shadow on the tape? Hear this vital music, and such ideological dilemmas vanish. These five shadows are alive. As a duo, Veryan Weston and Caroline Kraabel opt for the delicate gesture, rather than the grand slam blowout. They can play beautifully slow, melancholic music in which the natural acoustics of each venue are exploited, contributing to the haunting moods. Kraabel is an expat American living in London; her also sax style is warm and personal, yet virtually opaque. No show off, she resists adding fancy 'effects'. Sax notes simulataneously mingle with her own voice, in tiny sighs, gasps, growls and sonlike trills. Weston, whose relatively low profile is belied by his superb playing, contributes taut and detailed piano phrases with sharpness and utter confidence. He uses the high register like hi-hat percussion, while his fortissimo low register chords add rich colours and depth.

The duo have an instant, in-sync telepathy. Each player leaves respectful space for the other. They can pause for breath while working, and without stopping they will start to blueprint a 'diagram' for the next ten minutes of invention. They don't edit out 'mistakes' like laptoppers. They weave them directly into the music, in real time, so they are no longer mistakes. We are being spoken to honestly and directly. The clarity of the recording is matched by the simplicity of Kraabel's sleeve. It's another topnotch entry in Emanem's catalogue."

"Weston and Kraabel are regularly concerned with abrupt, pointed interaction. Whether they are testing each other or the walls or the roof, they will bounce and hammer the notes back and forth. With increasing intensity, an improvisation may dribble, meander, or billow into sweeps of discord. Kraabel's alto saxophone is often a half-step away from a shriek. She will flash a phrase then pull away, cajoling Weston into hard, deadened responses that might spin into tightly devised repetitive figures. That Weston favours linear lines, in the left and right hands, doesn't preclude a wanton chord or a lush cadence, though fractured harmonic prompts are more to his taste.

These five duos, like the record's title, are kinds of 'shadows'. The shades, for one, are darkened and grey and strewn with doubt. And Weston and Kraabel do shadow each other - man-marking, so to speak. Weston may begin, and Kraabel quickly trips him up, a slash or a poke. Certainly there are moments of space, but rarely do they give each other an inch; with all the rustling and squirming about, the instruments bend into joining mazes. But, ultimately, these shadows are hardly indistinct. The clarity of voice and precision of line makes FIVE SHADOWS an engaging and decidedly compelling duo."

"Aptly titled, FIVE SHADOWS documents a series of piano/saxophone duets which often feature more open space than sound. Because of the relatively sparse nature of these improvisations, the notes that are played tend to acquire special meaning. Each of the five tracks on this disc represents a separate performance with its own characteristic acoustics and approach. Overall, Weston's piano playing on FIVE SHADOWS avoids conventional melody or polyphony, preferring instead to utilize light runs and trills, with interspersed punchy chordal fragments. He engages in call-and-response free improvisation with saxophonist Caroline Kraabel. Kraabel's birdlike tweets meet with treble piano dialogue, while her explorations of tone and extended techniques conjure up more texture and tonal depth from the pianist. During moments of sustained intensity, especially as the disc progresses, their performance acquires an intriguing pulsing effect.

Both players understand and respect each other's space and momentum. When the energy level picks up, their improvisations assume a denser, more melodic flavour. Mostly, FIVE SHADOWS has a decidedly introspective, deliberate feel - characteristic of the airy aspect that defines much of British free improvisation. Listeners with a taste for delicate, deliberate interplay will find FIVE SHADOWS a rewarding experience."

"The pieces are often an immense exercise in call and response traditionalism, continuously improvised and overtly adventurous. The tracks are characterized by unique circumstances, producing authentic, recognizable, almost tangible, moods. What is striking is the sameness in the music, even as the duo ventures into new territory.

The instruments are played mindfully by a clearly intuitive pair. Weston and Kraabel are intelligent improvisers; both are strongly versed on their respective instruments in the languages of improvisation. Remarkable are the techniques employed by Kraabel on her alto. She is frequently lyrical and always resourceful, whether sounding straight tones or creating raspy, reed-generated effects or harmonics. Their ability to navigate the piece through each other's stray inquiries is the technical foundation to this disc.

Colchester serves well to familiarize the audience with the challenging material ahead. Kraabel's alto is ablaze on this first track, following the piano's every gesture with aggressive broken scales and circular figures. Liverpool runs its course as the instrumentalists improvise on pitches rather than patterns. Weston delivers violent, percussive sweeps on the piano, often followed by soft, reflective shimmers. It is a wonder that the tracks were not titled after the distinguishable pianos that resided at each location. Most relevant to the listener is this, a key function to these performances: the function of the occasion, under the influence of dynamics unique to each venue. Weston and Kraabel are aware of the elements in their surroundings, and they exploit these acoustic features for impressive delivery."

"You need to be extraordinarily accomplished to turn the piano into a responsive vehicle for Free Improvisation, but that is what Veryan Weston has done; his clean, decisive runs turn on a dime, creating a delicate sense of poise. Since her emergence as one quarter of Manchester's punkjazz phenomenon The Honkies, alto saxophonist Caroline Kraabel has built herself a reputation by organising mass saxophones and composing for the London Improvisers Orchestra. The reed-piano combination is simple enough to come across vividly in these excellent live digital recordings, and the choice of highlights is exemplary. Kraabel has not forgotten her punk roots, and there is much fun to be had as childish crudities allow the musicians to forge bright bold shape. If the artists associated with the COBRA movement were to play music, it would sound like this: consummate abstract art spiked wwith winningly infantile energies."

"This documents a series of concerts given by the duo in an array of English burghs. One piece is selected from each performance and with the first piece from the first date and the last piece from the last date given in order, it offers a condensed view of how strong a relationship developed along the way. Again, Weston's attentiveness is striking."