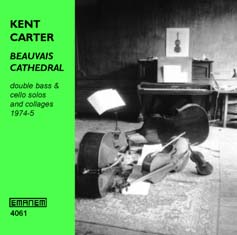 I first met Kent Carter when he came to London with Steve Lacy in 1973, and was immediately impressed by his powerful and profound playing. He often visited London during the next couple of years playing a variety of gigs, such as a month with Amalgam in a London revival of the play "The Connection", and another month providing the solo musical accompaniment for a stand-up comedian. In between times, he returned to France to work with Lacy and quietly work on his own music.

On a subsequent visit that I made to Paris, he asked me to visit his apartment in the Chateau de Maignelay near Beauvais, some distance to the north of the French capital. It was then that I first heard some of the music on this CD - an experience that hearing him in other contexts had not prepared me for. On his next visit to London, we spent many hours editing his solo recordings, and mixing some of the mono recordings into stereo collages. If only digital recording had been available then - it would have been so much easier!

Carter didn't yet have access to first class recording equipment, and my mixing facilities left a lot to be desired, so these recordings are not state of the art. However, they have been cleaned up digitally for this release, so that this magnificent and imaginative music can be heard anew. Hopefully you will now share the excitement I had when I first heard this music - an excitement that I continue to have even though I now know this music like the back of my hand.

"BEAUVAIS is magnificent. Carter's sensitive ability to overdub and make the music live is a condemnation of all the overdubbing the 'industry' does on their million dollar creations. Carter possesses tremendous technique in pizzicato as well as arco. At times he shifts back and forth incredibly quickly with the illusion of two separate players dialoguing. The unorthodox techniques he applies to the music succeed without fail. And then one should mention his 'free' melodica work and the Lacy-inspired use of a small radio as a backdrop. The music is all abstract though one picks up licks and subtle motif-like themes recurring during a given piece. BEAUVAIS is a celebration of the abstractness of emotions through the abstractness of sounds - soft, loud, sparse, dense, free and in constant movement."

"You won't find Kent Carter's name in any of your Jazz Polls, but it's hardly because of a lack of talent as this marvellous album attests.

Any critical evaluation of a solo bass album like this must begin beyond mere appraisals of technique. That Carter is a consummate bass and cello player is a gross understatement. What makes the solo pieces so successful is the way Carter is able to use his technical facility to produce a wide range of dynamics, timbres, harmonies, rhythms and pure sounds from his bass and cello. My personal favourite is the Bass Suite where Carter's stunning pizzicato work takes the piece through some tricky changes.

On the other pieces, Carter uses various combinations of his instruments to create some fascinating sounds. This is best done on the title piece - it's a h aunting evocation of the spiritual."

"The music is honest, free, in open form, mostly improvised and deals with centres of energy and layers of textures, rather than the romantic sense of melody, harmony, etc. The compositions show an amazing degree of contrast and variety while setting the mood and emotion for Carter's extended developments. Carter succeeds very well and is a formidable cello-bass player."

"A long awaited treat from the back catalogue. Kent Carter, who is certainly most well-known for his long tenure in Steve Lacy's various groups, is also an extremely thoughtful and passionate solo artist, exhibiting a rare combination of classical chops with extended techniques and folk leanings. This welcome reissue will change the way we view the history of bass improvisation - not only filling in a stylistic gap between the era of Silva/Grimes and that of Kowald/Guy, but also by adding an entry to the list of truly important solo contrabass recordings.

Technically, you might say this is neither a solo not a contrabass recording: Carter uses overdubs very creatively (and has a guest here and there), and he also plays cello (melodica, drums and radio). But that's nit-picking. This is sheer, resplendent dark woods magic.

Carter put a lot of consideration into these pieces. Sometimes an effect like chamber groups is produced, while at other times the starkness of the playing is what compels (for example, on the gorgeous second cello solo). Carter is certainly fond of thick textures and voicings here, as on the lush Chateau de Maignelay. But there is always a directness, lyricism, and clarity of line here. The result is improvisation as well thought out and coherent as the most finely wrought composition. One of the joys of the set is its focus on the timbre of strings (in addition to fundaments like attack, resolution, and decay). With this attention, Carter uses a vast number of techniques to create what are effectively sound environments through his improvisations (a great example of this is the chamber-like Steps).

In the whole, there's very little to dislike about this music. It's passionate and cerebral at once, experimental and accessible both. So where to begin with Carter's sound world? Try the long bass suite, whose complex overlapping lines create a dense lattice. Then jump to the very experimental title track, which oozes with pure sound. By now you're deep inside Carter's cathedral and it's a fine place to be."

"Like his colleagues Barre Phillips, Barry Guy and Peter Kowald, Kent Carter combines a hunger for new sounds with an appreciation of the organic magnificence of bass sonorities - extending here to cello, solo and overdubbing, even a string quartet with Carter playing every instrument. Recorded in glorious analogue, BEAUVAIS CATHEDRAL encapsulates a jazz sensibility that embraces European classicism on one hand and post-modern experimentation on the other."

"This is a very intense and, at times, quite electric album. Anyone who's well into the contemporary work of, say Lutoslawski or Zemlinsky will probably find these recordings intensely satisfying. If you're not into classical, let alone modern classical, I would tread very, very carefully here. The opening track, a cello solo called Pinch is amazing. I always thought of the cello as a sombre and melancholy instrument, but I have my reservations now! Carter takes the cello through acrobatics, loop the loops and somersaults as well as around the houses to get as much emotion and colour as he can. It's much the same with the double bass. What I did enjoy was that every now and then, with a certain twist, he gives the listener some incredibly beautiful passages. It's not all, as some would say, making the instrument do what it's not supposed to do. Michala Dance, the title track, Steps and, of course, Pinch all contain some genuine and intense improvisations that boil, simmer, and bubble with invention."

"It used to be a very rare event for a bass player to make a solo record. Now things have changed a bit, but BEAUVAIS CATHEDRAL takes the listener back to the day. This disc is not exactly a solo bass disc but it conveys a strong sense of single-mindedness and direction. Kent Carter's first experiments in this realm from 1974-75 portray a clever and focused mind at work. The use of edits and overdubs on most of these tracks reveals a coherence and symphonic compositional sense which rarely appears in free improvisation. (Don't go looking for crystal clear sound here--these recordings are 25 years old, though remarkably well-preserved.)

Carter is a versatile player, and each piece in this collection has its own distinct personality. Some of the common threads include attention to structure, even among the most exploratory efforts; considerable focus on the use of dynamics to develop, sustain, and release tension; and an open-ended willingness to bring strange (and at times otherworldly) sounds into the mix. The best example of pure solo playing can be found on Bass Suite No. 1: Fingers, where Carter extends and develops a theme using a range of techniques: mostly pizzicato, with plenty of percussive tones, stretching, and drone-like double-stops. More textured work appears on Play Time, where Carter bursts forth on the cello with impact and energy in response to what sounds like a shortwave unintelligibly scanning across frequencies. At times the cello and radio sounds are nearly indistinguishable, as Carter sneaks in and out of high-register squeaking. Finally, the title tune (with 8 overdubbed voices) sounds dark, treacherous, and eerie as Carter scratches his bow across the bass (and 5 cellos). Beauvais Cathedral stands out as something of a pre-electronica dark ambient composition, exploiting higher-order harmonics and eventually insistent tumbling treble tones in an ephemeral onrush of sound.

It's remarkable that one man (with scattered help here and there) could come up with this broad a range of sound. And rather than yanking out all the stops to find unexplored niches in alternative techniques, this disc tends to emphasize creative collage construction and careful thematic development. This record reminds me at times of Dave Holland's early solo work, but Carter's efforts are much more open-ended and multi-dimensional. Best of all, BEAUVAIS CATHEDRAL is a disc that reveals many layers of ideas upon repeated listening."

"Although all of these pieces were clearly experiments both in terms of conceiving music and pushing the possibilities of crude recording means, they make for a beautiful, mature album. Sound quality is not always fantastic, but the CD reissue cleans up a lot of noise and in any case, the music makes up in excitement what it may lack in high fidelity. The range of expression goes from cello and bass solos (Bass Suite No 1: Fingers and Cello Solo 2: Beginnings constitute highlights) to virtual chamber ensembles. Beauvais Cathedral, for radio, piano strings, double bass and five cellos, is the most striking, unusual piece of the set, a rich, lugubrious drone. For those who know Carter only for his tenure as Steve Lacy's sideman, this album holds a revelation."

"Beauvais Cathedral was (Carter's) first album. It isn't quite a solo project, though what sounds like a string quartet on Steps is the result of careful overdubbing. Carter worked closely with EMANEM's Martin Davidson, using fairly archaic equipment; nevertheless, the results are warm, resonant, 'live' in feel and consistently fascinating. There are three short double-bass solos, a virtuosic cello solo that uses rhythm and dynamics to create an illusion of over-dubbing (or two players) and a numbver of ensemble pieces. "