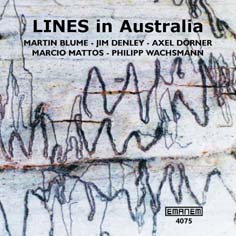 All digital studio recordings made in Sydney
by Yosi Gabbay - 2000 February 12
Total time 56:18

In early 2000 the other four members of Lines came to Australia for concerts in the 'What is Music?' Festival and for a recording with ABC Radio. This CD is the result of that trip and that recording session. In Europe we always got together once or twice a year for a short tour or a festival and we had always felt that each time there was a change, a development in the music. On this tour our concerts started in Melbourne and we were able to drive after that up the coast from Melbourne to Sydney, then spend some time in and around Sydney before we recorded. In a sense this was partly a music tour and partly an expedition, and I was the tour guide.

Afterwards there was a perception amongst the group that this experience of a radically different environment (to Europe) had imbued the music with a different and unique sensibility. This at first seemed like a strange idea to me. As an Australian who had always tried to play music imbued with a spirit of my place, to be told that after a week or two in Australia they felt confident enough to express something about it seemed at best premature. I¹ve always felt that if you have no words for a place and if you know no deaths and births in the landscape you cannot begin to decipher it¹s psychic geography.

But the more I¹ve listened to this recording the more I¹ve come to the conclusion that something of the powerful nature of my land did get into this music. Whether this is a result of a special sensitivity improvising musicians develop is an interesting question. I guess one definition of an improvising musician is a timespace sensitive sound artist. One usually is talking about real time when one makes such a statement, but perhaps in this period the 'moment' got stretched over a two week period and the musicians were responding specifically to the timespace which was the Lines Australian tour.

To arrive in Australia was to experience displacement.

Jim's love and intimate knowledge of his country always fascinated me on long journeys together in Europe between gigs. Suddenly we were there, a place full of familiar indicators but so totally strange. It shook assumptions that I did not know I had. Knowing what you were seeing was suddenly impossible.

As in Calvino's 'Invisible Cities', we all came to the same place from different contexts and saw different places. Both Marcio and I were moved by triggers that reminded us of our respective youths in Brasil and Uganda - for me this included the climate and vegetation and the 'displaced English community’. And yet it was definitely not the same.

Of course these processes are mirrored in and are at the core of our so called 'improvisation'. New behaviour, 5 musicians from 4 continents. Each player brings his 'imaginatory' world, reads others' in a unique way, responds therefore strangely, and in the end a new thing is created.

As Jim indicates, the experience of making this recording was akin to improvisation. It was to take us to a strange new place. The collective music making and communication may look familiar, but conventions, non conventions, and gestures bend in unnatural light.

A history of LINES:

In the spring of 1995 I stayed in London once again at the house of my friend and long-time associate Marcio Mattos. A quartet with Phil Wachsmann and Jim Denley came together for the first time for a typical London club gig at the China Pig. The music was fantastic and we decided to continue working as a steady group, which we called Lines. But we felt that a fifth voice would make the composition and chemistry of the group even better.

At the same time I was looking for a new possibility to work with the German trumpet player Axel Dörner, in whose first quartet I had played at the beginning of the 90's in Köln. He seemed to me to fit ideally into the group. Lines first came together as a quintet for our concert at the Ruhr Jazz Festival, in my hometown Bochum - the music was really magic. One piece of this concert recorded October 27, 1995 is documented on our first CD: LINES (Random Acoustics RA 022, 1997). Since then, the group has toured a lot in Europe at many festivals and clubs.

The two weeks in Australia really were a great experience for all of us, and produced some very special music, examples of which are documented on this CD.

"What does matter is the fact that this album contains some of the finest free improv around. The five musicians are obviously at ease with each other. The session progresses at a comfortable pace. A conscious effort is made to keep things from getting too heated, but it doesn't turn into a restrictive rule. Lowercase or 'Berlin reductionism' this is not. The group explores a wide range of dynamics and sounds. Wachsmann and Mattos keep the electronics very subtle, preferring to engage the group more like a standard string section. Blume's creativity knows no boundaries and a single hit on a metal bowl (or is it the bell of a cymbal?) turns Bush Onion Story around. Denley¹s flute flutters by, evoking the strange birds of the Australian outback. On par with the best moments of the Spontaneous Music Ensemble and Chris Burn's Ensemble, Lines have produced a keeper: challenging, pertinent, and rewarding."

"They recorded this excellent, highly skilled record during a session in Sydney, in 2000. What I like best about this group is the continuous shifting among instrumental characters: part of the material sounds like it was composed and carefully orchestrated - but it's not so - and while you're enjoying that fullness, you are suddenly thrown into small conglomerates of linking electronics, anarchic percussive sounds and brash melodic ideas that never let you catch their beginning or their end. When all is said and done, this CD flows like pure water, never tiring your ears and leaving you asking for more when it's over."

"The group works in a space that calls for accumulations and densities of small sounds, explosions, contractions, and myriad levels of interaction. Perhaps the group's significance in the contemporary improvised music scene is its balance at the edge of two rather different approaches to free improvisation, the 'laminal' (often employed here by Axel Dorner's grinding, droning meta-trumpet, for example) and the 'atomistic' (the strings' and percussion's scattering 'insect' sounds); in either case, the idea is to create a largeness of smallnesses, and Lines give us this largeness with verve. Quite hard to top their outstanding mid-'90s recordings, released eponymously on Random Acoustics, but the energy here is consistent and refreshingly subtle and light, and the invention flows freely - the group's growl, whisper, shout, turn-on-a-dime bravura is overflowing. The design and development of these pieces makes them sound almost composed. It's a beautiful balance of hesitancy, trajectory, and play. An essential Emanem release, and highly recommended."

"Denley plays wispy flute as well as alto; the wonderfully subtle string players tactfully splice in electronics; Blume listens with intensity and punctuates decisively; Dörner conjures dream sounds from his instrument and places them perfectly. IN AUSTRALIA documents an extremely rare evening where the level of interaction earns the right to use that overused improv adjective, 'organic'."

"This is great spontaneous music!! It is great to see the interaction between these musicians, specially I liked the way Mattos creates sounds with his cello while Blume makes some noises and sounds with his percussion. The good thing here is that this musicians play a lot with sounds and silences, so there are parts where all instruments remain in silence while one plays a phrase and then let the other instruments play and breathe."

"It's one of the quieter pieces of improv you're likely to hear, though the music is often very active, and shows that 'quiet' doesn't have to mean 'lacking in intensity'. The opening title track launches into the more industrial end of free improv, and subsequent tracks feature whistles, toneless blowings, patterings, scurryings, scratches and scrapings placed in cunningly inventive and emphatic juxtapositions. The final and longest track, Ghost Gum, does often raise the dynamic level, with sounds drawn out and twisted to dramatic effect. This is a thoroughly engrossing product of the Emanem renaissance, packed with incident and beguiling sonorities."

"For the most part these improvisations combine sounds which are highly organic with those that are electronic, spectral noises generated by Mattos and Wachsmann. This group seems, indeed, to specialise in contrast, not only the organic/electronic one but in their ability to conjure up a sense of both vastness and intimacy. On the tracks where Denley playes flute - especially Marks on Sand -he emerges as the key, hissing like desert wind or intoning like a dropped object in an abandoned cathedral. Blume plays quite unexpectedly, accenting loudly in delicate passages or laying out entirely in the most heated moments. Mattos and Wachsmann scrabble about like twigs, and alternately generate noises that sound like laboured breathing run through a wah-wah pedal. Dörner is at his most experimental here, using his arsenal of techniques, mutes, and so on to generate the most abstract noises one could imagine coming from a trumpet. These improvisations could collectively almost be a travelogue through some imagined musical landscape, so evocative of place are they."

"Delivering an abundance of metallic, electric and pneumatic impulses, the disc at once cries Ligeti while whispering a fragile embroidery of familiar, yet foreign, short-duration sounds. Trumpeter Axel Dörner is both at the fore and quietly underneath these evolutions, while catalyst Phil Wachsmann provides rich texture both with bits and rosin - a side of the ring shared by cellist Marcio Mattos. The group fully exploits the subtle liberties of improvised music, whether exploring the effects of a drone or filling pockets with electronic anti-space. While it is hard to find a foothold at any one point in the programme, the music thrives, developing its own character, simultaneously defiant and quietly companionable in its own spontaneous pursuits. IN AUSTRALIA flourishes as these electro-acoustic musicians press to the forefront of creative music, redefining free improv."