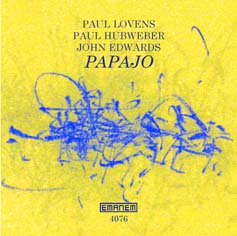 In private, most improvisors will gladly admit that there is simply a lot of second-rate improvised music around. And when one listens to a supremely successful example of free group improvisation such as the music created by this Anglo-German trio during the last concert of their last tour (which is documented here in its entirety), one could be tempted to pinpoint some of the basic criteria which many improvisors, regardless of 'schools' or 'cliques', somehow seem to agree on. Cornelius Cardew once postulated a number of 'virtues that a musician can develop'. I would propose a different set of criteria.

Adaptability for one. I.e., the capability of making connections with your instrument, of matching, complementing or contrasting the timbres and textures of the other players. One of the most exhilarating aspects of these 74 minutes of trio music is the way the players constantly reinvent their instruments in order to build the meta-instrument which another group with the same instrumentation, although with quite different musical objectives, once wittily dubbed 'bassdrumbone'.

Scope. Meaning the richness of individual vocabularies, the ability to cover the whole range between pure noise and precise pitch, between clearly delineated motives and amorphous sound masses, between points, lines and the musical gestures of which Albert Ayler said 'you have to escape from notes to sounds'. It is obvious from the first few minutes that each of these players has fully explored the immense spectrum offered by his instrument, that Lovens, Edwards and Hubweber are by no means limited to one fixed idea about what drums, double bass or trombone 'should' sound like. From the most filigree of sounds to the most dramatic physical gestures: everything is present here, and everything at the 'right' time.

Timing. Nothing is more elusive, nothing is more important than the ability to play the right thing at the right time, especially when there is no meter to give guidance. There is a lot of quicksilver high-speed interaction at work in Papajo. At the same time, Paul Hubweber, Paul Lovens and John Edwards also have a joint understanding when sounds or textures need more time to develop, when quasi-stasis in pianissimo subtlety is appropriate rather than dynamic rapid-fire change.

Remaining in the Now. For established improvisors, it is so easy to rely on personal formulas, on sonic trade marks. But if you are truly improvising, you must be ready to give up your personal predilections in favor of the truth of the moment. (This is the virtue Cardew termed 'Acceptance of death', the acceptance of musical transcience.) And as a group, you have to avoid relishing in the approved modes of interaction, and rely on the things that 'work'. Many ensembles somehow decide on a working method that excludes certain musical phenomena: a pointillistic music without pulse or melodic gestures for example, or a pure noise music in which defined pitches are a no-no. There is no such narrowness, no such aesthetic bias in Papajo's music. All musical options are at work, but the players don't get stuck in any of them. Melody, pulse, rhythm are implied, only to disappear just as quickly. This is indeed 'the sound of surprise', in a world of improvised music that is, in fact, quite often disappointingly predictable.

I could go on. And elaborate further on something that others would state quite simply: that this is great improvised music. As you will discover for yourself.

"For this reviewer, Papajo hits the target. A book should be written on Paul Lovens' virtuosity in self-detachment. He constantly adapts his playing to the context, harnessing his wide range of dynamics and perverted sense of rhythm. Whenever he takes out his singing saw (in Primitivo di Mantre and No Reason to Play the Blues) is an occasion to celebrate. In John Edwards he finds a very good partner in crime. The man¹s sinuous sound, close to Paul Rogers in spirit, has the playful quality required to intermingle with the percussion. Paul Hubweber is less known. A trombonist in the vein of Paul Rutherford, he eschews the roles of melodist or soloist, finding clever ways to attenuate the distinctions between horn and rhythm section, favouring attack to note without cornering himself into a reductionist credo. This album has all the qualities of good improv: it grabs hold of your attention, unfolds its mysteries gradually, invites repeated listens. Most of all it speaks to the soul, especially in the eventful Philantropical Dance and the closer No Reason to Play the Blues."

"PAPAJO features an entire concert by this top-notch trio in the chamber improvisation tradition of Paul Rutherford's Iskra 1903. Paul Hubweber moans and chatters, using the trombone as an extension of his own vocal resources rather than as an instrument with a received repertoire. Bassist John Edwards is solid and pithy to the point of intractability, laconic against Hubweber's wheedling, growls and exhortation If they assume Rutherford and Barry Guy's roles, then Derek Bailey's place in Iskra 1903 falls here to veteran drummer Paul Lovens, and it wouldn't take a gigantic act of imagining to transpose his shrewd dynamics, calculated irregularities and carefully managed montage of timbres (complete with bowed saw) into the guitarist's now familiar language. The music emerges in taut relationships: chamber scale but muscle tensing."

"File under 'excellent free improvisation'. Percussion, trombone and double bass are just sound sources for a very engaging and unpredictable music; this is the classic album that will be appreciated and loved by the ones who already know the players involved but could be a little harder for the neophyte, even if there's always time to learn something in life... What really impresses is everyone's full capacity of reinventing the voice of a single instrument in order to put it to work in unexpected contests; trombone becomes a voice, double bass gets everywhere, while Lovens is not exactly known for sounding 'traditional' on drums and percussion... The result is, as usual for Emanem's standards, so new and fresh you'll probably forget who's playing what!"

"Paul Hubweber's technique incorporates lots of small sounds: muted bent pictures, rapid-fire blips and crackles, and growls, to name a few. There is some Paul Rutherford in at least his style, but few other overt influences. Over the course of the recording, Hubweber's full arsenal unleashes, and he impresses as an abstract performer well-versed in his craft, disciplined and proficient. To his credit, he transcends the limits of his instrument. Paul Lovens is the key to the trio, as he drives the group with unconventional panache. John Edwards is the third cog, and his acoustic bass adds colour as much as anything. The totality of the performances exceeds the natural limitations of the individuals, but this is serious music that must be followed closely to appreciate its unfolding. There are many little treasures throughout, but to uncover them requires the listener to listen intensely. The volume tends to be low, there are naturally no melodies, and unlike most small groups the horn is not the dominant voice but rather an equal among three."