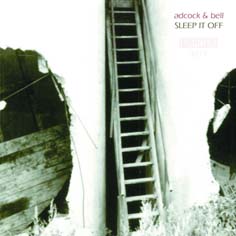 The original impulse for this collection of improvisations came from a festival at Podewil in Berlin. The theme was Free Reed Instruments, and jazz harmonica virtuosos from Ireland and Canada were scheduled alongside the Khene mouth organs of Molam Lao (later I played on Molam Dub, a collaboration between this traditional Laotian outfit and Jah Wobble). Mike and I thought we should propose ourselves for this festival, as being the only free improvisers who could manage with just free reeds. So we recorded a handful of pieces to show off our unique skills. They were warmly received by the happy few who heard them, and we decided to continue. We felt there was a special quality about these tracks, and that it was worth pursuing that quality, using a wider range of instruments, across a whole album. So my shakuhachi flute and Mike's prepared piano were drafted in. Some pebbles and the so-called stereo goathorns crept in the back door.

Mike and I had been improvising together for many years, in gaps between outings with avant-dance band Accordions Go Crazy. Whenever possible, we liked to bully waltzes, polkas and improvisations into sharing the same stage. Here we have tried to behave and just concentrate on one thing, namely playing wonderful music with no preparation apart from the whole of our lives up to that point.

About the instruments: the Khene is a large bamboo mouth organ, played in Thailand and Laos. The Akha Khene is a smaller version played by the Akha tribe in northern Thailand. The Pi Saw (also from the north of Thailand) looks like a flute, but has a metal free reed and is inserted into the mouth. These are all Free Reed instruments, and are the ancestors of the harmonica (placed in the mouth), the Indian harmonium (powered by bellows at the back), and the accordion (worn on the chest). Quite different are the Shakuhachi, a flute from Japan, and Mike's 'Quickly Prepared Piano'. And 'Stereo Goathorns' is a nickname for a mouth-blown double reed pipe with a pair of cowhorns, which began life as a Welsh bagpipe made by Julian Goodacre.

As for what we were aiming at musically, even if I knew, it would be better not to say. Every time I listen I hear something different, which steadily moves further away from the impulse I had while playing.

"Pianist and accordionist Mike Adcock plays zydeco, leads a jazz trio and has recorded with the effusive Accordions Go Crazy. He also runs The Last Dance Orchestra, an inventive folk-tinged ensemble that features Clive Bell's flutes and whistles. Bell, who spent two years in Japan studying the shakuhachi bamboo flute, is a seasoned free player as well as a recent collaborator with Jah Wobble and a regular contributor to The Wire.

After improvising together at the Free Reed Instrument festival in Berlin, the pair decided to pursue further their blending of harmonicas, accordion and South East Asian mouth organs, and the splendid SLEEP IT OFF is the result. Whether powered by lungs or bellows, wind instruments set the agenda; rhythms of inhalation and exhalation, expansion and contraction, create a meditative atmosphere, although there's always plenty happening, little events that surprise.

Free reed instruments incline toward nasal tonality. Bell's shakuhachi and Adcock's 'quickly prepared piano' enrich the music's coloration, along with sounds of bird warbles and stones. Even within the free-ranging compass of improvised music, this stands out as unusual instrumentation. As a consequence, perhaps, each sound is weighted with associations. And we're not only talking about the exoticism of Bell's wonderful bamboo khenes; harmonica and accordion bring up homelier evocations of informal music making. At times the musicians exploit this, starting with the blues harp train wail that recurs on the opening track. More often they transcend such associations in the creation of unique, gentle and often beautiful music."

"Beauty can be a controversial topic, especially when it comes to avant-garde music. Hitting too directly, it can be perceived as sickly sentimental or vapid - avatars of popular music and its recipes to make the common denominator sigh. Too mannered or buried under the processes of an elaborate artistic approach, it looses its characteristics to become only an intellectualised vision of what beauty should be. Mike Adcock and Clive Bell have avoided all these pitfalls and created music anyone with an open mind will agree is beautiful, although most people may find it highly unusual. SLEEP IT OFF features the two of them performing on an array of free reed instruments, ethnic instruments and small objects. Accordion, harmonica and shakuhachi (a Japanese flute) provide the core of the instrumentation, completed by prepared piano, Indian harmonium, khene and pi saw. The choice of instruments changes with each piece and is kept to two or three at a time in most cases. Add to that a relatively short average duration and you get a collection of little gemstones of various colours. Real Lakes lets accordion and Thai khene (a Bamboo mouth organ) breath in harmony to create a lush drone. Melodies arise in some pieces, expressing forms and feelings beyond time and cultures. If a couple of tracks are more difficult to the ear (like Lullaby for Young Owls featuring Bell on the 'stereo goathorns' a screechy mutated bagpipe), they only make the other pieces more soothing. Soothing, but by no mean easy or predictable. It requires involvement from the listener and it rewards in ways very different from more common free improvisation. This album is simply one of the most original and beautiful albums this reviewer has heard in 2002."

"In a word? Wonderful. Wonderful because of the instruments used (mostly Asian and African harmonicas/flutes, harmonium plus various others), because of the 'deep simplicity' of ideas, because of a highly emotional and spiritual level I felt coming from the two involved artists. This is a drop of the purest water and it's not to be missed, being one of the gentlest and warmest collections I heard in the last years. It's breathing, pulsing stuff, comparing itself to simple beautiful events - I don't know exactly the reason but most tracks remind me of a little bird trying his first flight. Esotic instruments notwithstanding, I never smelled a trace of 'fake world music' - never in a fraction of a second, an index of sincerity I rarely find elsewhere these days. I can't help but say 'thank you' to Mike and Clive for this major effort; here's my hoping SLEEP IT OFF finds a lot of people willing to open themselves and give some room to just a little shade of rare serenity into their ever-convulsed life."

"The music has some of the free-wheeling inventiveness of the Incredible String Band at its best - attractive, instrumental vignettes made up on the spot. Shuffle and Deal and We Open Early are harmonica duets; Infanta couples Adcock's quickly prepared piano with Bell's shakuhachi to make an evocative tone poem. Other numbers, such as Sketches for a Frenzied Whirling, use space and long tones to establish a mood and sound world all their own. There are some very weird sounds, but also little melodies and hooks to discover. This is not music that tries to be popular or definitive."

"Bell and Adcock revel in the strange, sometimes raw timbres of reed instruments such as the khene (Thai mouth organ), shakuhachi (Japanese flute) and the decidedly non-ethnic (and rather scary) stereo goathorn coupled with accordions and prepared piano to create 12 vibrant, delicate miniatures. Bell's command of these obscure and unwieldy wind instruments results in a rich palette of whoops, breathy lyricism and throaty, buzzing rasps that pick their way through Adcock's shifting clouds of accordion drone or fragile prepared piano.

Sometimes the duo hint at the immersive deep listening droneology of Pauline Oliveros or the limpid expressionism of Toru Takemitsu; at other times traces of traditional musics appear, but shot through with an improviser's taste for the unexpected (this is the only record I'm aware of that features a duet between shakuhachi and sticky backed tape, which is probably enough to recommend it to some of us). Much of it is beautiful, but (as you may have guessed) it's not the pan global mush you might encounter playing in your local health food shop. This is honest, open, resonant music, sympathetically recorded. SLEEP IT OFF could charm the birds from the trees, and might just do the same for you. Recommended."

"Nothing whatsoever to do with jazz, but a completely engrossing CD of improvisations recorded on a collection of accordions, harmonicas and other miscellaneous reed instruments. The musical language sounds more like reinvented folk music, Adcock and Bell creating highly memorable themes and a dramatic sweep lasting nearly an hour that kept this listener glued to his chair."