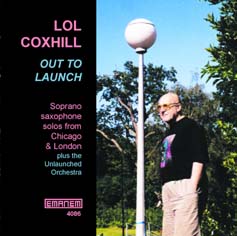 First of all, apologies for the title of this album. I am afraid I couldn't resist it, even though I did not want to link this CD to my least favourite Eric Dolphy album.

Most of this CD resulted from events relating to Lol Coxhill's major retrospective SPECTRAL SOPRANO, which was originally supposed to be coming out on another label. After a couple of years’ delay it looked as though it would be coming out late in 2001, so a launch gig was organised to revisit some of the pieces on the record, with as many of the musicians as possible. At the last minute it was discovered that the double CD was still not coming out, but it was decided to continue with the gig anyway as an 'unlaunch concert'. And very enjoyable it was too.

At the end of the evening, Coxhill invited the other participants who were still around, plus members of the London Improvisers Orchestra who were present, to take part in an improvisation. The result was THE UNLAUNCHED ORCHESTRA. That so many musicians can improvise such coherent music together is testimony to the ongoing LIO project and other aspects of the London improvisation scene.

SPECTRAL SOPRANO was eventually issued (as Emanem 4204) early in 2002. For a post-release launch, Coxhill decided to play a solo concert in the small basement under Mark Wastell's Sound 323 record shop (the hippest record shop in London, and one of the hippest in the World). RELAUNCH ONE and RELAUNCH TWO are the two sets of the performance that afternoon. As usual his playing was an endless stream of invention.

A few weeks later, Coxhill and Paul Rutherford were invited by John Corbett to play at the Empty Bottle Festival in Chicago. As well as playing at the Bottle in a septet directed by Rutherford (heard on Emanem 4082) and in a duo with Torsten Müller, Coxhill also performed solo in the Lincoln Park Conservatory Fern Room - a humid space full of passing people and children as well as ferns. This situation seemed to bring out more aspects of his earlier playing than are usually heard these days resulting in MUSIC FOR FEATHERY FRONDS, which, like everything else on this CD, is heard complete as performed.

So this is really a solo album, with a brief orchestral interlude. After listening to Lol Coxhill's solo playing for over thirty years - he has actually been performing solo for over forty years - I am always hungry for more. He is surely one of the finest solo improvisers around (and an equally fine group player as well).

"Most of this disc consists of three very long solo pieces, a great opportunity to study Coxhill up close. Music for Feathery Fronds is nearly a half-hour of very experimental stuff (different in some senses than one expects from Coxhill these days, and more like his earlier radicalism of the 1970s). The chirps, buzzes and flutters suggest he's absorbed some of Butcher's methods (or is it vice versa?). Still, I couldn't help but hear Coxhill quote some Lacy (quoting Monk!) on this track. This lovely piece also benefits from a beautiful acoustic, where every micro whisper and long tone are warmly accentuated.

Fascinatingly, the same kind of linear development and clarity is heard on the ensemble piece The Unlaunched Orchestra, where Coxhill was joined by many of his colleagues. It's a lovely cacophony, a highlight of which is the mix of Sun Ra-like electronics with drunken brass in the middle of the performance.

Relaunch One begins by alternating between whispers and full-throated bluesy hollers. This piece features the date's most bop-influenced and chromatic playing. And Relaunch Two is equally lusty, though pitched further out at both extremes (the lyrical and the experimental). Here Coxhill occasionally drinks in idiomatic material (very obviously in one particularly swinging flourish). And how interesting it is to compare these thoughtful, focused improvisations with the methods of the other two obvious soprano masters, Steve Lacy (who works in dense little identifiable cells) and Evan Parker (who's equally loquacious but whose idiom is more personal, more abstract). Coxhill reveals himself to be squarely on their level, of course, but with a distinct idiom fusing more evident blues and bop references with extremely radical technique and a consistent sense of narrative flow and organisation. Coxhill always serves up a rich course, filled with pleasures expected and surprising. This one is a delight."

"If there's a man capable of having you passing 80 minutes listening to a single instrument playing, that's Coxhill. Such is the case with OUT TO LAUNCH of course: Lol's soprano sax is so deliciously lyrical and full of fantasies - not to mention every trick in the technique book - that you can preposterously use this record as soundtrack of a part of your life: I did it, reading and doing stuff while gently accompanied by the music of this master, and at the end of the record I asked myself if it was not too short... The second track brings the 'Unlaunched Orchestra' to the spotlight in a lively, spirited instant composition that takes just about ten minutes from Lol's soliloquies. Nevertheless, what remains at the end is purely Coxhill's: sense of humour, deep heart, the desire of trying virgin paths. A fabulous brain."

"A Coxhill improvisation is a languorous musical stroll, abstracted from the world through a laconic eye, avoiding stops and starts, clashes. There's a strong narrative and it can be pleasant on the ear with its meandering nature emphasised by frequent bending, curling and swooping notes, often elongated into a wistful sigh. These are contrasted with spells of rapid, fluttering, tongue-slapping notes, as though our 'nothing to do, nowhere to go' mind has tripped on a small fascination, engaging a more detailed investigation, and stirring the brain. Actually, the pace of Coxhill's musical strolls has quickened over the years, and the previously almost completely blue sky and sunny aspect has darkened. Perhaps that's a reflection of improved technique, by which I mean the capability to play the Coxhill solo.

On the shortest track, our solo venturer is one of a large collaborative group of improvisers, and whilst he seemingly has no role in leading or directing the ensemble, they play in a Coxhill style, with long lazy lines interwoven with flurries, Paul Rutherford to the fore, although the easy-going nature is disturbed by percussion and electronic interjections."

"The concert from 2001 turned into an 'unlaunch' party. Making the most of the situation, Coxhill grouped his attending friends and musical colleagues of the evening into The Unlaunched Orchestra to perform an 11-minute group improvisation. The piece works as a contrasting interlude, but the real focus of the album is Coxhill's solo playing on soprano saxophone. Music for Feathery Fronds is a half-hour long performance recorded in Chicago as part of the 2002 Empty Bottle Festival. Slightly jazzy, at least hinting at the man's work of the '60s and '70s, it follows a singular and - one must admit - captivating trail of thoughts. But the real treat is the 40-minute set (in two parts) recorded at Sound 323 in March 2002. Here, Coxhill's soprano playing reaches new heights in sinuosity, notes bending in a dance that evokes soulful cabaret singers at least as much as avant-garde saxophone. This man is a snake-charmer."

"The wonderfully idiosyncratic soprano sax playing of Lol Coxhill. His playing is an interesting cascade of twisting and turning ideas supported by unusual techniques, moving tangentially to his clear concentration and quixotic brain. Coxhill's tone is clear and open, almost buzzy, unique in a world of modern strong-toned pure players; at times it seems self-effacing, thread-bare like the clothes of a rag-tag troubadour. This is its charm: his playing doesn't try to impress with technique while bowling you over with wit, charm and, yes, incredible technique. It's an odd balancing act, but his ideas flow from a seemingly endless fountain, and though you can't be certain what will come next, you can be assured that it will be unlikely and interesting.

The third and fourth pieces titled Relaunch One and Relauch Two, are 24 and 13 minutes in length, holding interest with their constantly flowing and inventive ideas. The last piece recorded, Music for Feathery Fronds was recorded at the Empty Bottle Festival in Chicago. Indescribably interesting, it is a joyous 28-minute improvisation that is never overbearing, never repetitious, unique and varied and an interesting listen into the mind of a musician who clearly never stops thinking and developing."

"With over forty years of playing the soprano saxophone under his belt, Lol Coxhill's recording career continues to stretch and overlap vast musical distances - humorous, noisy, rocking, crooning, conceptual, lyrical. This new album of solo improvisations (plus one 13-member orchestral interlude) plots a lush spot of fresh, long meditations on soprano. Music for Feathery Fronds billows with the light touch of a devoted musician enjoying his craft. Almost every other pause for breath during this 28-minute track feeds Coxhill an opportunity to change direction and develop whatever suddenly found friction has just emerged from his trail of timbres. Relaunch Two features a relaxed exploration of tangents and loose articulations that breeze out from the sax's open holes. The faster, more rhythmic moments capture the brief enthusiasms that so many great tunes inspire. Rainbows of spinning notes arc up and dip away. The Unlaunched Orchestra fits well into the fold of the solos, and offers an 11-minute improvisation dense with multiple personalities that retain their distinctiveness. Paul Rutherford's trombone is unavoidably noticeable; Neil Metcalfe's flute makes vital contributions; Steve Noble's percussion swings in around the wind instruments; the electronics of Knut Auferman, Steve Beresford and Pat Thomas lend necessary dimension; Lol Coxhill shimmers through it all, keeping the group poised on the verge of racket descent, but on just this side of coherency."

"The longest track is the Chicago set, named Music for Feathery Fronds. It's a virtuosic performance, full of jazz references and extended technique on the saxophone. The two other improvisations Relaunch One and Two are denser and darker in mood, but no less effective and no one should be so fooled by Lol's jovial festival MC persona as to mistake the depth of feeling which permeates his work. Very warmly recommended."