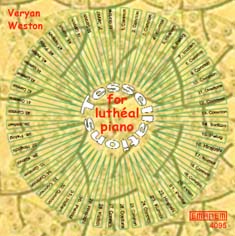 Tessellations contains structures which have, by coincidence, similarities with some of the principles of geometric tessellations - hence the title. Visual interlocking symmetries and geometric shapes are transferred to the audible world of rhythm and counterpoint, with the spirit and energy of jazz, improvisation and folk music always at the heart of the performance. The piece contains a sequence of 52 closely linked pentatonic scales. Each scale has two pre-established areas in which ideas for improvisations can be explored and developed, and because the piece is continuous, the player and listeners take part in a journey that lasts about one hour.

Also with this CD is a ROM part giving information about research which was started in the early 1970’s. The research explores the scales used in Tessellations and how they are closely connected. This material can be accessed by either PC or Apple computers. Images of tessellations have been used as backgrounds to the theory. Some of them are modified historical examples of tessellations, while others are originals made with pentagrammic templates and a computer. The final preparation for this piece and the written theory on the CD ROM was made possible by an award given in 1999 by the Peter Whittingham Foundation administered by the Musicians Benevolent Fund.

The Museum's Living Music organiser, Jo Santy wished to schedule events with the Luthéal piano. This unique keyboard is a grand piano Pleyel of 1920 enhanced by four registers and mechanisms invented by the Belgian Georges Cloetens in 1918. These mechanisms make the piano sound like a harpsichord, or resonate the upper octave harmonic of each string like the harpe tirée technique, or both simultaneously - the natural sound of this wonderful piano also being available. The only historical Luthéal piano belongs to the Museum of Musical Instruments and was repaired in order to be performed. But only two works of Maurice Ravel exist in its repertory - and nothing else.

Around the time Jon Rose and Veryan Weston were working with the recordings of TEMPERAMENT (Emanem 4207) in Brussels, Veryan was wondering about the unique existence of the Luthéal in the town, but the instrument was not available at the time. When TEMPERAMENT was issued, Jo Santy listened very appreciatively to the different tuning inventions of Rose and Weston. The natural gift of Veryan for keyboards convinced him to schedule a Luthéal concert in March 2003. Veryan proposed to perform his version of Tessellations, a solo piano suite using 52 pentatonic modes specially written to improvise upon. The way he tessellates his modal scales and his melodic-rhythmic motives related to African, Indonesian, European folk and jazz musics, changes greatly from performance to performance.

Two months before the concert, the composer made a short visit to Brussels to adapt his work for the Luthéal. It took him fifty-one minutes to try the instrument, to make the choices and to note the playing instructions on the score. The day of the concert, Veryan rehearsed the most demanding sections for twenty-five minutes - and that was it.

I won't begin to tell you about the authentic surrealist feeling we experienced seeing and listening to the pair of Jennifer Pike and VW. Jennifer's presence and movements instilled an aura of mystery and playfulness, which brought a natural organic breath to the keyboard performance. Also, as a designer, jeweller and artist, she was very involved with geometric tessellations.

Now, largely due to the careful and generous work of mixing, editing and mastering of Michaël W. Huon, we have the sound of this new instrument, with its hybrid cimbalom register (which the player made to sound like a cross-breeding of an harp, a harpsichord and a zither), and the triggering harmonics produced by the stopped strings. I hope that the performer met the inventor's wishes, especially in these sections where the registers are mixed, alternate and in dialogue like a miniature gamelan orchestra - Tessellations has five pelog mode sections.

"Tessellations is a unique work performed on a unique instrument by a unique pianist. On this CD Veryan Weston performs on what is arguably the grandest prepared piano in history: the presumed last Luthéal piano in existence. First built in 1914, the Luthéal piano uses organ-like stops to move small quills and pieces of felt into close proximity to the strings, producing timbres similar to those of harps, harpsichords and Hungarian cimbaloms. Weston thoroughly exploits the possibilities of the Luthéal piano in this album-length solo piece, which is built upon a sequence of 52 closely related pentatonic scales. In other settings, Weston can be an expansive improviser; here the demands of the materials dictate a concise, rigorous performance, which Weston delivers with often astonishing authority. In addition to the music, this single CD also contains a CD-ROM section that explains the interlocking relationships of the scales Weston used in the piece."

"British pianist Veryan Weston’s Tessellations is one of the more riveting examinations of pitch systems in an improvisational context, in some ways harkening back to the period when John Coltrane started exploring Nicolas Slonimsky’s Thesaurus of Scales and Melodic Patterns and then exploring modes and triadic harmony in the context of each other. In some ways, Tessellations has a significance akin to Terry Riley’s In C, a work that changes the way we feel tonal relationships.

The materials for Tessellations developed over a long period of time in Weston's music, but he first began recording it around 2000. In 2003 he recorded TESSELLATIONS FOR LUTHÉAL PIANO at the Musical Instruments Museum in Brussels. The CD documents the remarkable character of the instrument as well as the piece, Weston exploring the Luthéal piano's organ-like stops for harpsichord and harp-like sounds.

" Veryan Weston recorded this extremely beautiful 'composition for improviser' in March 2003, his stupendous technique at the total service of the concept of tessellation. I will try not to be overly hyperbolic on this music, nevertheless it's difficult not being left breathless by a complex instrumental organisation which sounds like if Cecil Taylor, Keith Tippett and Conlon Nancarrow had been fused into a monster with twenty-plus digits. And what's more, the music is so perfectly specular, mathematically perfect and harmonically enjoyable, yet full of 'out-of-context' little spirals just adding to the total that one won't even need that well-worn degree in composition (or free improvisation, for that matter) to understand that Weston has given us the gift of another stunning record."

"Veryan Weston is an unusually cliché-free pianist, invariably finding a fresh angle and sounding like nobody else. TESSELATIONS is a landmark in his recorded work, a brilliantly realised hour-long compositional structure for improviser that derives additional interest from being performed on the Luthéal Piano, a grand enhanced by four registers through mechanical means. Tesselations uses 52 linked pentatonic scales with built-in scope for exploration and invention. Weston uses the harpsichord sonorities of the Luthéal with tact to match the fine judgment shown throughout this evolving mosaic. A seamless yet strikingly varied cycle unfolds, comparable in scope and accomplishment to, say, Terry Riley's extended piano compositions, comparably pleasurable and deserving the same kind of respect."

"Veryan Weston is mostly known as a free improv pianist. That's why TESSELLATIONS serves up two major surprises. First, the title piece (the only one on the disc) is a hour-long conceptual work based on a suite of 52 related pentatonic scales. Second, it is performed on the Luthéal piano of the Musical Instruments Museum in Brussels (Belgium). Invented around 1918, it is a regular grand piano equipped with a mechanism that adds stops, much like a church organ. One stop lowers a row of contact quills a millimeter above the strings, giving a harpsichord effect; another stop moves thin pieces of felt onto the exact middle of the strings, producing a gamelan-like sound. Each stop has independent bass and treble registers. Only a handful of copies of this expanded piano were manufactured and it is believed that the one at the MIM is the last of its kind. Invited to present a performance on it, Weston chose his Tessellations, a piece that explores every harmonic nook and cranny of the instrument. One hour in duration, it moves seamlessly from one scale to the next, creating interlocking patterns embellished by improvisation. Somewhere between virtuosic, voluble free improvisation (think Borah Bergman, sped-up American minimalism, and Lou Harrison's pieces for gamelan), the piece can be both exhilarating and charming. It appears to be running for too long, but it succeeds in convincing the listener of the necessity of such duration. An enhanced portion of the CD contains valuable theoretical background on pentatonic scales."

"The pieces fly by at near Nancarrow speed and the shifts in sound are sometimes subtle, sometimes surprising. Weston used the different voices at some points to create fore and background, at others to create tidal shifts in the middle of a piece. His playing is exciting and immensely enjoyable. By the last dozen tesselations, his use of the dampers gets distractingly overt, but you can't blame a pianist for wanting to open that hog and see how fast it can move. It's a worthy recital, something that deserves a place alongside Cage and Nancarrow in the world of pianistic linguistics."

"A unique performance in the Museum of Musical Instrumnents in Brussels, using the only historical example of Cloeten's remarkable pianos which has a facility for plucking strings and generating overtones as well as playing conventually. What is remarkable is how natural Weston sounds on the instrument, almost as if it expresses an already formed part of his musical nature. The tessellations (a term that is best described by the example of interlocking tiles) have an inevitably somewhat repetitive quality, but the shimmer and internal movement of this music makes it irresistible."