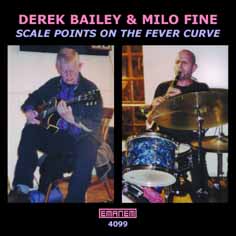 SCALE POINTS ON THE FEVER CURVE

Derek Bailey and Milo Fine first corresponded about 30 years ago by what is now known as snail mail. Outside of Minnesota, Fine was then best known as a writer - something he continued to do for the next 25 years - although he was already a prime mover on the Minneapolis free music scene.

Bailey and Fine first actually met and performed together in 1983, when the guitarist was touring North America. An April concert in Minneapolis started off with Bailey solo, followed by the long-standing duo of Fine and Steve Gnitka, concluding with the three playing a trio set.

Fine first visited London in 1988 as a participant in Company Week organised by Bailey, where the two performed with the other participants in various combinations, sometimes in the same grouping, but not as a duo.

Fine's second visit to London (plus Sheffield and Leeds) lasted over six weeks in 2003, and resulted in over a dozen gigs and private sessions with various musicians. His first performance on this visit was the one heard on this CD. It was the first time Bailey and Fine had played as a duo, but since they are both very experienced improvisers, it sounds as though they have been doing it for years.

Four improvisations were performed that evening - two before the interval, and two after. Their order is preserved on the CD. The first and last are heard complete, while only extracts from the second and third have been used.

"Noting the instruments used on an improv record can be pretty pointless, when part of the process seems to involve transcending and transforming the sounds a guitar or saxophone or piano can make. The degree of closeness to its accepted range of sounds may in fact be one of the things that distinguishes free jazz from free improv. To say Derek Bailey plays guitar is far too specific a statement. Better say he extracts a performance from his instrument that is persistently perverse without ever being predictable. This live recording with Minnesotan multi-instrumentalist Milo Fine finds Bailey playing swelling chords against Fine's percussion and strangely orchestrated micro sounds behind his colleague's clarinet. Somehow it always seems just right; never obvious, just right there in that moment. Like on Opening Gamut where keyboard and guitar combine, moving from utmost delicacy through an insane parody of ragtime to controlled freak-out. It makes for a music that's eventful. but not episodic, and successful, but not in any predetermined sense. Closing Gambit completes the set. It's abstract and impressionistic but there are also melodies and something like time signatures seems to emerge, if only for a few seconds. I even thought I heard Bailey playing rock guitar at a couple of points. Now that really would be the 'Sound of Surprise'."

"Milo Fine is the improvising equivalent of a one man band. He's played drums, piano and clarinet since the 60s and 70s and in 1980 he invented the m-drums, made up of 'found objects' and broken cymbals attached to a practice pad set, later incorporating low tech electronics. He also plays cello, trombone, accordion, violin, marimba and celeste, but on this live recording from his 2003 British tour he restricts himself to clarinets, electronic keyboards and drums. Described as an 'aesthetic absolutist', for Fine, the avant garde is as suspect as popular music. For Bailey, of course, all music is suspect. Fine's approach isn't just 'ready to hand' - he's a real virtuoso on his instruments, and the result is some colourful yet hard-core improv."

"I actually dislike Milo Fine's apparent attitude to improvisation. In fact, I dislike it so much that I find his work absolutely compelling. He betrays little empathy with his fellow performers, as if constantly trying to upstage them, seems to have an all-or-nothing sense of dynamics and texture and appears to be afflicted with a near-pathological fear of silence. And yet, on the few opportunities I've had to hear and see him at work, I've found his confrontational style fascinating, perhaps because it contrasts so much with the European approach which, at its least effective extreme, can tip the players' willingness to interact over into tentative pussyfooting. It was in fact during Company Week in 1988 that I first heard Fine perform - with a group of the usual suspects in much the same way he plays on this disc: clattery percussion, a rasping, quacking clarinet and (here, but not then, as I recall) a tumbling, clangorous piano style vaguely evocative of Howard Riley afflicted with chronic short-term memory loss.

Bailey, for his part, seems to default into the kind of mildly ironic mode I've seen him adopt when playing with the likes of Keith Rowe, producing smooth arcs of sound interspersed with waspish, skittery interjections which have as little to do with Fine's outpourings as possible. Yet, given a history which, some may argue, has seen the differences in the ways people improvise being gradually eroded over the years, there should always be room for this kind of stuff; indeed, this may well be a reason why Bailey wanted to play with Fine in the first place. This disc is in fact a good antidote to any sense of complacency that might affect improvised music and its listeners, so do buy it. Extraordinary."