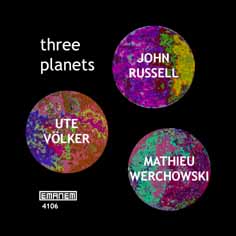 Here's a rarity - a group put together by a festival promoter that not only makes great music but wants to play together. Our thanks and admiration must go to Emmanuelle Pellegrini who had the foresight to see that these three players would make a trio, even though they are three different ages and come from three different countries: from England, John Russell (born 1954) based in London; from Germany, Ute Völker (born 1963) based in Wuppertal; and from France, Mathieu Werchowski (born 1973) based in Grenoble.

They came together in Verdun for the festival Densitée 2001. I'd heard good reports of their performance, but was unaware of the music of the younger two. After several performances in France, John Russell arranged for the trio to play four gigs on four consecutive evenings in four London venues. He also asked me to record them at my house during the second day.

The first concert was at the Red Rose - one of Russell's Mopomoso series - where they played opposite Evan Parker (and ended up as a quartet). It was obvious from the start that this trio was a superb group (not necessarily the same thing as a super group), so the recording session the following day was obviously going to be a pleasure. They positioned themselves around my stereo mike, and made great music for a couple of hours.

The accordion is relatively rare in free improvisation, but Ute Völker shows there's enormous potential for it - her playing should convert anyone who does not take the instrument seriously. There is currently no shortage of fine improvising violinists, but Mathieu Werchowski shows himself to be one of the best. And John Russell as usual confirms his status as one of the handful of guitar greats around today. As for the trio - it's one of those groups that are even greater than the considerable sum of its parts.

"This is simply one of the most striking projects John Russell has been involved in. Brought together for the Densité 2001 festival, this trio 'clicked' and carried on, turning what was meant to be a one-shot meeting into one of the most distinctive trios of late. Most of the credit for the group's uniqueness goes to accordionist Ute Völker. Still misunderstood in free improvisation, her instrument here sounds crisp, rich, and full of possibilities. Her playing complements Russell¹s frantic guitar picking to a stunning level. She manages to find a voice for her instrument without resorting to references to folk music or entertaining shticks. And without distillating her playing down to abstract, disembodied clicks and crack, she interacts fully with her partners and unveils an engrossing range of tones, sounds and textures. Russell is in top shape, fully engaging the music, every note more relevant than the previous one, especially in Pachyderm's Canon, where the whole piece seems to emanate from his guitar, so close-knitted are the moves of his two partners. The young violinist Mathieu Werchowski also makes an impressive debut on the Emanem label. His feverish bowing and his taste for choosing the atonal textures that just sound 'right' flag him as an improviser to keep an ear on. THREE PLANETS is definitely not your usual free improv trio session. Besides the instrumentation, one finds in this album a rare level of vitality and invention. Possibly one of the best records of free improvisation in 2004. Highly recommended."

"THREE PLANETS, the dense trio record from John Russell, Ute Völker and Mathieu Werchowski, is aptly named. They play like three planets - all attracted to the same energy source, but each instrument revolving and glowing at its own pace. Russell's toothpick-thin acoustic guitar slices around Werchowski's preference for attacking the lower registers of the violin with slow, grainy bowing. Völker coaxes a deep, hummy vibration out of her accordion when she's not punching holes in the air with plasticky single-note puffs. The eleven tracks on this CD clock in at just under 79 minutes long, making one full disc of thick improvisation. The longest track, Little Litotes Blues, begins with Russell doing a chinka-chinka-chinka thing on guitar, like he's about to bust open into a massive two-chord rock anthem. Quickly enough, everyone is rolling around on each other's sonic turf and instrumental distinctions become immaterial, the sonic swarm enveloping. Not until midway through the second minute, when they slow down considerably, does it grab you by the neck, ushering in a creeping deluge of vibrating foliage, which melts, in turn, during the fourth minute. Later, something slimy crawls out of Völker's accordion, fuelling tensions with the bizarre. A stand-out track on an album replete with quality sonics: jittery accordion rolls during Fletch 'n' Sketch, the mellow minutia of Par Ensemble, and the pile of notes crashing together after an illustrious ascent of golden harmonics during Seeing As How You Said It So Elegantly The Answer Is..."

"In the liveliest segments of THREE PLANETS there's a curiously loose, almost playful atmosphere that's in direct contrast with the low undertones met somewhere else in the tracks. The whole recording lives off these extremes and that's a major plus in a CD that parallels the improvising merits of three musicians born one decade apart from each other. John Russell's at his usual great self, bracketing short spans of movement with slashing plucks and constellations of diagonal arpeggios, inserting harmonics in the potion with the same nonchalance of a cook putting salt in a soup. Ute Völker is a fabulously inventive accordionist, talking loud 'organ style' when needed and whispering minimal circles that put you right into her sticky net - and it's guaranteed you won't move. Mathieu Werchowski's violin phrase eviscerations and tightrope-walking, high-pitch ostinatos add a measure of anarchy that's as welcome as an old friend returning home after a long absence."

"I must concede that a soft spot exists for the guitarist, who uncharacteristically flourishes machete at his instrument through much of the performance, rarely hinging things upon trademark chordal brooming and/or more conventional right-handed attack.

The French violinist's long, singular lines change the colour of things while he often remains concurrently atop the trio - the sun trying to sneak past the rooster, Völker billowing and sinking to the floor, toying with the listener's notions of fore and aft. Werchowski's is a very different approach aligned with current stringéd kin, more furtive and compacted. At instances he locks up with the lungs of the accordion in deference to Russell; black leather clad deviants breathing heavily in a big room with maroon walls.

To this music's credit, the accordion is often courted and played around. Ute's quavers recall the nether register of Dolphy's bass clarinet beneath the introduction to Spritual at the Vanguard and by turns some old, haunting church organ. Doubtless inspired by the time of year/listening conditions, THREE PLANETS indicates climactic anomaly, a portent of autumn's dryness and thick sweatshirts. Each are aware of their destination and each cognizant of the rocky path ahead. Exactly how these three maintain such an even weight throughout is puzzling and attractive in itself - continually having to weave around the other, swinging back with intense patience until the time to charge is certain.

This is ribald parlour music, woodcut allegorical - worthy of your time and grip. I am glad to have met this violin and accordion and hope this trio continues to record."

"Common point of congruence is a disinclination to play traditional instruments in a traditional manner, but with no reliance on amplification or other electronics. Still with Free Improvisation heading towards a nearly 50 year history, little of what the three do should sound freakish to the sophisticated listener.

Mostly linear in their improvisations, the three mesh micro-tonalism, pan-tonality and meiosis with slabs of mangled traditionalism and pure silences. Speed is often on show, and while there are points where, as in all Free Music, linking a sound to an instrument is impossible, never do you forget that Russell and Werchowski's axes both have steel strings.

Together the three can be crafty as well, interrupting what could be a Morris Dancing country ballad from the accordion with screeched double stops from the fiddle that almost splits the strings into nodes. Ponticello bites that reconstitute themselves into parakeet-like twitters arise at intervals from the strings, while bouncy ployharmonic vibrations often jiggle from the accordion.

One example of this is Zum Dreispiel, which for all the world seems to begin with nose-blowing noises. Völker then contributes high-frequency dynamics and Russell percussive beats as Werchowski snakes a high-pitch theme around the other two. Soon his buzzing strings come in and out of focus as the front space is taken up with elongated accordion riffs and harsh guitar pummelling. Wasp-buzzing spiccato from the fiddle subsequently distorts the theme, then the leakage of sounds from the strings and the accordion bellows gradually gets fainter and dissolves into silence.

When the accordionist introduce a fragment of an Eastern European-style melody, shrill fiddle squeals and taunt string nips from the other two, mature the line to post-modernism. Thoroughly POMO, here Werchowski's tone duplicates that of a high-pitched reed, likely scraping away without resining the bow. Eventually the accordion swells to a crescendo, introducing deeper, darker and more slurred lines, which contrast deliberately with the polyrhythmic scrapes from the string players. Reaching a pulsating climate where the squeezebox sounds like a Model T's motor turning over on a cold day, Völker accelerates his tones with portamento, then pulls back and lets them resonate.

Nearly 79 minutes of trio music may be too much for many. But taken in small doses, THREE PLANETS provides much pleasure for those whose capacity for improvisation accommodates encompass guitar, violin -- and even accordion."

"Context is always going to be of particular concern with musicians such as Russell, and the chamberish look to Three Planets perhaps disguises what is a tough, focused, dramatic encounter. Völker is one of the few to make much of the accordion in an improvising situation and she suggests that she could be finding a very fresh vocabulary for the instrument. Werchowski's virtuosity is put at the service of the music and Russell is at his liveliest."