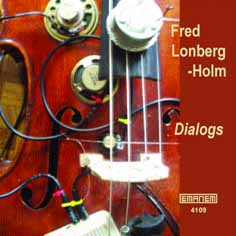 Well, you can forget about the cello, my friends. Clutched in the hands and wrapped in the thighs of Fred Lonberg-Holm, this shapely, stringed resonating box is attacked by the crudest of implements, made to literally eat in on itself, and is ground down into its most elemental particles - a homeopathic cello. The sound contained herein is simply the resultant dust, that floats like a fine mist, smothers like a coarse blanket, and gets caught up in a ferocious wind, that tears away at your skin. This is the kind of deconstruction that is best experienced from a distance and through safety goggles. If music is sex on a beach, Fred is the dirty sand, defying any smooth, easy, one-note lubrication, and turning a basic instinct into a complex of irritation. While always honest and naked, there is nothing pure about it, nothing singular or precious, with every utterance a dense multiplicity, every action a provocation, and every episode an exploding kaleidoscope.

This is a solo recording, yet I hear an entire ensemble. The Ensemble of Fred, stacked thick with a relentless depth that only pauses to reload and strike again. An ensemble whose empathy and interactions are as quick and precarious as our life force. Putting this particular ensemble together took a great deal of time, effort and care, because once you are in this richly populated band, there's no way out. And while there is nothing adorable here, there is much to adore in the shear depth and breadth this artist brings to each moment. Nothing is wasted and everything is laid to waste. The act of creation and the act of destruction coexist, and a new way is found. If you still really believe that less is more, then practice what you preach and shut up and go away - at least from this recording. The cello will never be the same, and neither will I.

"Davidson's label is just as well known for its fine solo releases as its epic large ensemble outings, and Fred Lonberg-Holm's DIALOGS joins Paul Rogers' LISTEN and Charlotte Hug's NEULAND as one of the most impressive solo stringed instrument releases of recent times. The album's title DIALOGS is curious; the idea of dialogue might apply to baroque counterpoint, but if your idea of solo cello is Pierre Fournier playing the Bach suites, you'd better steer weeeell clear of this one. Fred's one of the few improvisers willing to get into the ring with the wild and wonderful Weasel Walter (of Flying Luttenbachers fame) and he's not afraid to treat the instrument as what it is: a great big wooden box with potentially dangerous high tension metal stretched precariously across it. Lonberg-Holm is able to create textures of considerable complexity, using his piezo pickups and tiny lo-fi speakers to set up grainy loops of nasty feedback he can scrape along with quite happily, so the resulting counterpoint - dialogue, if you will - is more one of confrontation between the performer and his materials than an intramusical play of pitches and rhythms (though there is a delicious snatch of melody, yep that's right, you heard correctly, just before the end of Dialog 2). In this respect it recalls Brian Ferneyhough's supremely ugly and ferociously difficult Time and Motion Study II for cello and electronics, but whereas composer Ferneyhough apparently seeks to destroy the performer altogether by providing him/her with a score whose sheer technical difficulties are deliberately insurmountable, Fred Lonberg-Holm shows that the same thoroughly enjoyable highly invigorating snarling vicious mess can be achieved with relatively simple equipment. What is needed though to pull it off is an intimate knowledge of the instrument and its possibilitis, and an impeccable sense of timing. Technique, in a word. And Lonberg-Holm has plenty of it."

"DIALOGS may seem a counter-intuitive title for a collection of solo improvs, but in the case of cellist Fred Lonberg-Holm the quixotic mantle fits. Cradling his dinged and battered instrument between his legs he sets about hatching a program of music heavy with odour of idiosyncrasy and irascibility. Aiding him in the enterprise are a handful of added accoutrements- listed in the notes as small speakers, test amps, piezos and motors- taped, glued and wired to various surfaces giving the contraption a cyborg-like appearance. Organic wood wedded with synthetic circuitry and metal- a duality that plays out in the ongoing duel/dance between 'natural' and 'artificial' tones.

Lonberg-Holm is notorious for devising nefarious ways to torture and persecute his cellos. He's one of the few arbiters on the instrument who can easily equal the cacophony of an amp-cranked guitar by playing purely acoustic. Plugged in watch out because any speakers in the vicinity are likely to fulminate and even detonate under the compressed din. That might resemble fawning hyperbole, but it's not far from the truth. His own canny, quirky personality feels at odds with the violence meted out his defenseless implement.

The disc's eight pieces are assigned simple sequential numbers to differentiate them. Lonberg-Holm keeps all but two to modest running times. Through all manner of rubbing, scraping, sawing and plucking a full range of ferrous and alien sounds spool out from the tautly wound strings.

On the opener he carves a tuneless jig pocked with air horn harmonics. Moments of outright lyricism are few and striking when they do occur. Track two opens with an ear-piercing sustained tone that bruises while it stupefies veering off into a jumble of knife-edged drones and puttering stops. The piece finds focus in a coarse colloquy between slicing arco streaks and a sustained mechanized drone. Suddenly Lonberg-Holm sharpens bow pressure mimicking the machine in a scribbling swathe of nose-bleed register modulations. The action ends with a skein of finespun chamber-style sonorities that fritter away into silence.

Track five finds him aping the plink-plonk pitches of guzheng or komungo. Track six involves noises that sound alternately like a swarm of mosquitoes and a muted outboard motor. Number seven, the most overtly mellifluous of the clutch, traces ribbons of whirring harmonics that almost take on the sonic cast of Scottish bagpipes. The remainder of the set follows a minefield course fraught with sonances that would take reams of paper and subjective prose to qualify. Some of the more abstruse manoeuvring struck me as overly enigmatic and mileage may vary, but this is an introspective expedition almost certain to transfix intrepid ears."

"This is by far Fred Lonberg-Holm's most experimental and difficult recording. Despite the title, this album is 100% solo. The dialog it refers to takes place between the cellist and his cello -- or is it between the instrument as it was conceived and the preparations it undergoes in Lonberg-Holm's hands? The artist has rarely gone this far in his deconstruction of the vocabulary of the instrument. It is not only the screeching bow-pressure techniques he uses, but also the small motors and speakers he attaches to the instrument, the piezos mirroring/multiplying/fragmenting its sound, the whole idea of approaching the cello as a noise-maker instead of an instrument. The resulting music is extremely demanding on the listener, as it completely eschews the notion of prettiness and redefines the concept of virtuosity. In the end, very little of the cello is actually left. The beauty of this music resides in the invention, the creativity, and (at times) the moving playing that can be detected through it all (as in Dialog 7, almost a gospel). Of course, Lonberg-Holm is not the first to reinvent the instrument from top to bottom. But despite its harsh outlooks, DIALOGS has the merit of offering a dynamically rich experience, almost maximalist in essence, which is a nice change from the minimal approach favoured in experimental circles at the time this CD was recorded and released. That being all said, fans of Lonberg-Holm¹s more conventional free improvisation and avant-jazz projects will most probably recoil at first."

"DIALOGS is the cellist's attempt to transfer an ensemble sound onto his instrument's four strings and wooden frame. He does so by appending a basket full of small speakers, test amps, motors, and piezos, which are pickups that give each string its own separate signal. That way, treble and bass strings have separate ouputs, creating a unique stereo blend.

Lonberg-Holm embraces electronics, trying to find as many harsh noise permutations as he can grind from his amplified and motorized axe. Throughout, the sounds he creates range from staccato sine wave smacks and alley cat-like screeching to more restrained plinking and plucking that go beyond the so-called British-oriented small sounds dubbed 'insect music'. Some timbres resemble wood splintering, others breaking glass, and still others a piccolo's extended shrill. At various points he makes the cello morph into a kazoo, a chromatic banjo, or bagpipes and take on the stentorian tones of the double bass' lowest strings.

The showpiece of the session is Dialog 6, which at a touch under 13 minutes manages to package almost all of the extended techniques together. Supplementing existing tones with one that could be that of a tiny, motorised fan hitting the string - a common inclination of AMM guitarist Keith Rowe - arco scrapes and sweeps constitute the tune's first section. Passing on the sound of a vibrating horizontal bow behind the strings, Lonberg-Holm blends his spiccato with ratcheting impulses and rending tones.

Skipping lightly down the strings for a time, abrasive scratches appear, vying for aural space with a secondary trilling line. Crumbling and crackling percussion-like vibrations reconfigure the upper partials as the cellist, pizzicato, leans into banjo-like frailing, interrupted by what seems to be fingers rubbing against an inflated balloon. Ghostly cries produced from full pressure on the highest-pitched string meet up with a pseudo Bronx cheer produced by speedy string concussion. All this forces the output into quicker and quicker grooves until all sound fades away.

Knob tuning and whistling, the thump and bump of lower-pitched reverb turns to piercing flutters, and among the extended string interface the odd legato, standard pattern is also harvested by Lonberg-Holm from his sound collection. Furthermore, Lonberg-Holm trumpets the fact that no overdubs are used on DIALOGS. Whether you prefer your cello straight up or with electronic attachments, Lonberg-Holm shows that an improvised solo CD isn't limited to any pre-set of sounds. The Chicagoan has proven he can be as sonically interesting alone as with others."

"Look at that nice woodpecker disintegrating a tree with its turbo-charged beak; watch temerarious jugglers handling high-tension sparkles. The wood, the electricity, the nerves: everything is visualized in Lonberg-Holm's music. Fred shows he's not a teleseller of low-octane gasoline for spent acoustic engines, nor an outbuilding type of new kid in town. DIALOGS is almost marginalising backwards, as the crude sincerity of these improvisations sounds like a finger pointed under the nose of an unpolite audience member, showing him the way out. This is music to be divided among few in a room, a communion of energies that launders cheapness and harmonic imitations of plastic nirvanas; it's ragged, loaded with sonic goddamnedness, strong and fighting with rocks in its hands. The muscular definition of this cello saboteur is neatly contoured in the blinding light of artistic significance."

"For those who are interested in Lonberg-Holm's avant garde technique, Emanem has released DIALOGS, a 'solo' disc of treated and manhandled cello. Retrofitted with miniature amplifiers, motors and various objects, the cello is made into something akin to Jean Tinguely's kinetic sculptural instruments, and the resultant sounds are possibly even less traditionally melodic. Guttural scrapes, ponticello, high harmonics, collegno, feedback, radio squabble and sounds of generally indeterminate nature are the strict language on this disc.

The DIALOGS title is apt: here, the process of sonic investigation is perhaps more (or at least differently) paramount and the physical fact of entering into sonic play, the conversation between two bodies, is apparent. DIALOGS offers a direct experience that anyone with an interest in art as exploration would do well to hear."