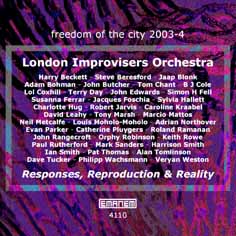 The London Improvisers Orchestra performances heard on this CD were recorded at two years of the FREEDOM OF THE CITY festival. Five of the twelve pieces performed at their 2003 concert are included, as are two of the five from 2004. As in previous CDs, and at their monthly gigs at the Red Rose in north London, there is a remarkable variety between the selections.

1. WIT’S END conducted by Dave Tucker. This conduction was the opening performance of the LIO's 2004 festival set. The featured musicians are Paul Rutherford (trombone) joined by Veryan Weston (piano) then Steve Beresford (piano) plus the strings and reeds; B J Cole (pedal steel guitar); Alan Tomlinson (trombone) with Adam Bohman (objects) and the drummers; Orphy Robinson (steel pan) over the strings and reeds and a marching bass; Robinson then with Louis Moholo (drums), Tom Chant (soprano sax) and Roland Ramanan (trumpet); ending quietly with Beresford and Cole and strings.

2. COMPOSITION NO. 67: IMPROVISATION PANELS (1) conducted by Simon H Fell, who writes: "The first in a series of works for improvising orchestra, using a text-based narrative 'script'; this example is a group of three short pieces with a specifically non-linear, dispassionate, almost aphoristic nature. The 'panels' deliberately explore timbre rather than thematic development.

"The inspiration behind this methodology came from viewing an interview with György Ligeti in which he described his method of working on a new orchestral piece. He told how his first step was often to write a (text) script of what should happen in the music, and which allowed him to articulate quickly and concisely the sonic 'happenings' his piece was to contain. Importantly, this was a description of what the music sounded like, rather than how it was technically constructed.

"I was excited by the idea of this script-based approach, especially with its implications for improvisers and other musicians working outside the field of conventional notation. It seemed to me that the script of the piece should be sufficient to allow improvising orchestra and conductor to fashion a specific but very free piece or set of pieces, without any recourse to further notation.

"Thus the score consists of a list of timbres and textures that I wished to hear, including some clear but general instructions to the instrumentalists as to how these might be achieved; the actual combination and ordering of the specified textures within the 3 pieces, plus questions of dynamics etc, were directed using conventional conduction techniques."

3. HEARING REPRODUCTION 5 conducted by Caroline Kraabel, who writes: "Part of a series of pieces with the LIO, Mass Producers and solo, focussed on what the technology of reproduction means. In this piece, I asked the orchestra members to behave like a reproducing machine and recreate as precisely as possible the input of my friend Jaap Blonk, who was attending as an audience member but very kindly agreed to provide a selection of his extraordinary vocal sounds."

4. PROCEEDING 6 - improvisation. Normally, the monthly Red Rose gigs end with a free improvisation, but this one occurred in the first half of the concert. Completely free performances like this show how much of an orchestra the Orchestra has become.

5. RESPONSES conducted by David Leahy, who writes: "The piece began with the idea of letting one person play the smallest fraction of a musical idea, and then allowing another member of the orchestra the chance to complete the sound by providing some sort of decay. From this beginning a freer, less conducted improvisation evolved. "

6. ISM conducted by Pat Thomas. The opening performance of the 2003 concert was this conduction that features the following wind players: John Butcher (tenor sax) riding over the three drummers and Dave Tucker's guitar; Lol Coxhill (soprano sax); Alan Tomlinson (trombone); ending with a duet by the unrelated Harrison Smith (bass clarinet) and Ian Smith (trumpet) joined by the other trumpeters.

7. FANTASY AND REALITY conducted by Philipp Wachsmann, who writes: "It has been very exciting to interact with my colleagues in LIO over some years, and this year was not an exception. Part of the excitement is the relationship between an agreed agenda for a performance and each individual's fantasy.

"In this piece I looked at aspects of playing together. If the 'tone' and 'stance' are healthy then music follows. Leopold Auer (a mega influential violinist) said 'tone is all' - a creed I am attracted to. This piece uses ideas that involve individual sound production and blending and which in turn set up a particular kind of listening. Interestingly for me the result is what I loosely call 'emotional' with a rather free feel which I value."

"There is not a single disappointment here, as each piece extensively explores and exploits the possibilities offered by this magnificent improvisers' pool. Dave Tucker, Simon H. Fell, Caroline Kraabel, David Leahy, Pat Thomas and Philipp Wachsmann take turns conducting the behemoth, sometimes using creative forms of scores, at other times simply moulding the sound matter in the heat of the moment. Opening the program, Tucker's Wit's End features an instrument this reviewer had personally never heard in a free improv context yet: the steel pan, played by Orphy Robinson in an eventful controlled chaos of a piece that has nothing to do with the Caribbean. Fell's Improvisation Panels (1) is not as intriguing as his other works for the LIO, sounding a bit too much like building-blocks composition, but it still provides a nice textural moment. Kraabel has been contributing game-like pieces ever since the group's first recording; her Hearing Reproduction 5 asks from the musicians to reproduce as precisely as possible the sounds of the featured soloist, the arguably inimitable vocalist Jaap Blonk, and the results are hilarious. Wachsmann's Fantasy and Reality may follow more serious guidelines, but it turns out to be a highly entertaining piece, rich in sharp contrasts, odd instrument pairings and simply fascinating group playing. RESPONSES, REPRODUCTION & REALITY may be the best place to start in the LIO's discography. It synthesizes all the qualities found in the previous albums."

"The LIO is a phenomenon that's worth documenting in itself, as an index of depth and diversity of improvising musicians in the city at present. Intriguing for example to hear BJ Cole's pedal steel glimmering through the 2004 grouping. And the music is, as ever, full of interest as ways are found to organise collective expression out of an assembly of 30 uncompromisingly independent players. Conducting is Butch Morris's legacy to the ensemble, individuals taking turns to impose degrees of regulation, shaping and monitoring the large group's mobility and density through actions, ideas and even scores. For all that, the track that on initial listening has most appeal is Proceeding 6, freely improvised within its own unambiguous terms of reference. Then again, maybe the discipline of being orchestrated through conduction reverberates through that effective piece of instant composing."

"With over thirty musicians, the orchestra's creative ways are partly signified by call and response dialogues, layered horns, and multicoloured contrasts. Effectively, the artists pursue a stop/start and regenerative process via a community-minded approach. Speckliing their notes with stabs at humour and wit, the musicians also pursue brash cadenzas with asymmetrical percussion grooves. Yet the instrumentalists are apt to splinter off into sub-themes. Part of the fun resides within the fact that they don't always perform as a group. It's akin to a theatrical component, where actors enter and exit a given scene. On Responses, the horns section evokes a sense of yearning, while on Fantasy and Reality, the overall muse is marked by weaving horns and subliminal exchanges, like Evan Parker's oscillating soprano sax lines. Nonetheless, they render a gamut of emotive qualities, as many of us have come to expect. And it's another cleverly articulated entry into this unit's gravitating sequence of musical revelations."

"First up is Wit's End by guitarist Dave Tucker. Here the conduction weaves features for various solo voices against the full ensemble. There is a symmetry that is created, framing the mounting activity with duos by Paul Rutherford and Veryan Weston to open the piece, and Steve Beresford and pedal steel player B J Cole to bring things to a close. In between, the improvisation lurches and jolts from hyperactive density to quieter pools of small-group interaction. Here, the textures of Orphy Robinson's steel pans, Cole's pedal steel, and Adam Bohman's electronics work particularly well against the swirling timbres of the ensemble.

Pat Thomas' Ism also uses the strategy of featured soloists; letting John Butcher, Lol Coxhill, and Alan Tomlinson loose over the energy whipped up by churning drums of Tony Marsh, Louis Moholo-Moholo, and Mark Sanders. Carolyn Kraabel's Hearing Reproduction 5 plays the ensemble off the input of vocalist Jaap Blonk, setting them free against his wild ululations, gurgles, shouts, and glottal splats. Bassist David Leahy's Responses takes a similar approach, with members tossing off musical fragments which are completed by other members, building a collective sense of attack and decay.

Simon Fell's Composition No. 67: Improvisation Panels (1) takes a different approach. Here Fell created a text-based score outlining general instructions for particular sonic events within the piece. He then used this score to conduct the ensemble, cueing the order of events, combinations of instruments, and dynamics. His mastery of structuring sound and silence comes out from the beginning, building up areas of growling trombone, glissed and plucked strings, and reed smears. Over the course of nine minutes, Fell contrasts sections of motion and stasis with blaring intensity and calm, creating one of the disc's highlights.

Proceedings 6, the free improvisation on this recording, is a bit less successful than the composed pieces. But even here, it is clear that this is a group that has spent a significant amount of time working together. It is striking how symphonic the improvisation sounds as the piece develops in sections around the gathering forces of the ensemble's various parts. This was clearly honed playing pieces like Phil Wachsmann's Fantasy & Reality, which works abstract tone clusters across the ensemble, developing a slowly evolving form full of swirling detail and constantly wavering densities."

"The LIO plays monthly at the Red Rose, more often than many celebrated small groups, certainly often enough to ensure that it sounds genuinely orchestral whilst implementing dramatically different strategies. Never more so than on Simon Fell's conduction, which bears the paradoxical name Composition No. 67: Improvisation Panels (1), and proceeds so inevitably that one might think it was completely scored. No one will get that notion from Hearing Reproduction 5, in which Caroline Kraabel bids the orchestra to exactly imitate the utterences of last-minute recruit Jaap Blonk. Give 'em credit, they never flinch, and the results overcome my usually severe reservations about improvising vocalists. But my favourite moment comes from the uncharacteristically expressionistic introduction to Ism, in which conductor Pat Thomas induces saxophonist John Butcher to ride the surf of three energetic drummers."