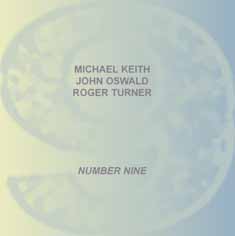 Take note of how completely Roger, John and Michael are themselves when they're making music - even if you hadn't seen this packaging you'd know it was them after just a few seconds of listening. The three-way conversations on this disc go so many places, juxtapose so many sounds and textures and thoughts against so many others. But the thing of it is that it's them; it's so very them. When the disc comes to an end, play it again. Smile a bit and nod. And then listen some more.

In the fall of 2003 I went to see a group featuring Roger Turner - Konk Pack - here in Toronto. He is beyond exciting to watch and listen to, and has since become without a doubt as much an influence on my playing as the usual other guitarists/horn players etc... I asked Mr Turner if he would like to do another gig while he was in town and he agreed. We played at a small venue in Toronto's west end called Mitzi's Sister, where we were joined by two long time improvisers from town - Michael Snow and Paul Dutton from CCMC.

In 2004 I arranged for Roger to come stay in Toronto for a couple of weeks, lining up as many shows as I could. One performance included John Oswald, another member of CCMC. We easily fell together and I think we all agreed that there was something special happening.

I had been a fan of John Oswald's for many years, not only through his work with CCMC and countless other improvisors but through his mind-boggling Plunderphonics.

In April 2005, Roger again made the trip to Toronto. After a few gigs as a trio we went into the studio, and within a few days Roger was on his way home to London. In May 2005 the three of us performed at venues in France and Italy. Over the course of our journey we have played together a total of seven times.

Listening to the CD, at this point, gives me a good feeling. The personality and musical history of each musician is clearly discernible to me. Even my past as a blues/rock musician seems to rear its ugly head at times!

It was a privilege to record with two of my favourite musicians and I hope you enjoy listening to the results.

"From the onset, the trio betrays a strong post-Bailey, post-Parker, post-Lytton sensibility, dealing in scrapes and scribbles and harsh, but often dazzling, sounds. Keith cops to a former life as a rock and blues performer in the booklet and there are places were stunted riffs and splintered chords from those tablatures come fleetingly to the fore. The manic bottleneck detours of Instants suggest one such stroll down memory lane. His picking can be nettlesome and abstract, but there are also regular returns to rhythmically grounded strums. On Nine he sounds like a demented Flamenco artist, implosive arpeggios shaving off his strings to dance with Oswald's clucking and wheedling exhortations. Keith makes use of amplification, but sparingly, and mainly in the service of conjuring and sustaining low aqueous drones. His ghostly operatic vocals, most prevalent on the closing Harbourfront bring to mind Robbie Basho. Much of the time, Turner plays like a man possessed, his blurred sticks sounding like knitting needles scuttling across cymbals to create a brittle percussive static. Plenty of detritus dapples his drumheads, furthering the sense of friction in his barrage. Oswald brings his Plunderphonics concept to the party, rising teakettle whistles and sustained wails alternating with murmuring reed pops and flutters, his alto becoming vessel for a swathe of extended techniques. The blueprint and implements are familiar, but this trio still manages to stake their own claim."

"The seven tracks are mostly effervescent examples of those malfunctioning mechanisms that give an improvising trio its most interesting features. Keeping well clear off clichés, the musicians have energy to spare: bunches of bubbling-crackling-rippling notes by Oswald, mixtures of entangled strings and kraut-tasting woodiness by Keith, the two sounding like a pair of bicycle racers struggling for victory in the last mile, only to suddenly realize they took a detour and the contest's already finished. Turner's incessant outbursts portray him as that kind of drummer who can begin a roll on toms and end it on your Ming-dynasty vase, then will throw the potsherds at you after the crash. The three comrades strike an unlikely instrumental friendship on their way back to normal life, each one always finding the time to listen to what the others have to say. An album of funny vignettes and volcanic articulations that is a delight to listen."

"The guitarist spent his formative years playing rock and Blues and he channels that technique through the refracted shards of Derek Bailey. Rather than shying away from idiomatic references, he draws on them with unfettered abandon. Oswald is a spitfire alto player, with machine-gun Bop fluidity exploded into spontaneous freedom. Turner, of course, is an old hand at these kinds of settings and dives right in with his pin-point flurries."

"The best-known member of this trio is of course saxophonist John Oswald, although his fame is derived much more from his incredible plunderphonics than his work as a free improviser. He is a jerky, honky player with a strongly Dadaist mind and a clever way of always listening intently and occasionally choosing to ignore what he hears. In free improv circles, Roger Turner would be the name that stands out of this session. This British powerhouse is well known for his work with Phil Minton, John Russell and the harsher Konk Pack trio. An explosive drummer a la Han Bennink, he also displays a Paul Lytton-esque finesse, one balancing the other to create an unpredictable and truly captivating musician. That leaves us with Michael Keith, an acoustic guitarist from Toronto (where Oswald also resides). The man clearly owes a lot to Derek Bailey (the fractured playing) and John Russell (that peculiar strumming), but he also establishes his own identity throughout NUMBER NINE, with punkish outbursts in Nine, a blues influence in Centre and a mock-rock riff that immediately determines the mood and short duration of Sister. This album was recorded in a Toronto studio two years after Keith and Turner's first meeting and a year after the trio's debut. Five of the seven tracks are rather short (seven minutes or less) and the two 13-minute cuts have the intensity and drive to sustain that kind of duration. The three unique individualities of the trio lock in together nicely, which gives us some exciting and even frantic free improvisation of the European persuasion."

"Famous for Plunderphonics, recognised as a notated composer, in addition John Oswald is a well-regarded improviser. Part of the long-standing CCMC, he also participates in many ad-hoc situations, one of which is captured on this fine seven-track CD. Although both alto saxophonist Oswald and guitarist Michael Keith are Torontonians, the performance is oriented towards reductionist Euro Improv, no doubt due to the trio's third member: veteran British percussionist Roger Turner. Turner, who has worked with everyone from German synthesizer player Thomas Lehn to British sound singer Phil Minton, brings a minimalist sensibility to the work, but this measured improvising is also self-effacing. So low-key he seems barely present at times, the drummer's favoured strategies encompass wire brush cymbal slaps and drum top polishing, friction applied to unyielding objects, plus more chain rattling than Morley's Ghost.

For his part Keith knits together chromatic runs and slurred fingering, plus super-fast, extended rasgueado. Occasionally, his bent, bottleneck-like picking creates distorted string phrasing as if he was stopping and sliding piano strings. Interpolating contrapuntal phrases, Oswald's response to the others' includes distracted, wobbly reed tones as well as stark, reverberating vibratos. Extending the trio's polyphonic intentions, tongue slaps and flutters often give way to swift, trilling split tones that hover stridently in altissimo territory then ascend to squeaking air raid siren pulses. Defiantly atonal and minimal, NUMBER NINE is still insolently entertaining, since the constant inventiveness and coordinated communication among the three keeps things moving whether the improvisation is two minutes long or nearly 14."