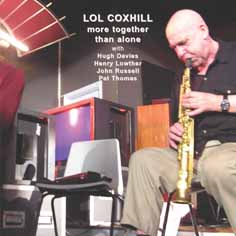 MORE TOGETHER THAN ALONE

I seem to remember someone once said of a certain jazz pianist, that he would sound good even if he was playing a spinet on the back of a camel. Something similar could be said about Lol Coxhill, who always sounds good regardless of what area he is playing in and who he is playing with. The variety of musical areas he works in was hinted at on his SPECTRAL SOPRANO compilation – this present collection just features his free improvising, but with a variety of partners.

The late Hugh Davies was a master instrument inventor and builder as well as being a leading twentieth-century music historian. John Russell is one of the major stalwarts of the London improvising scene (like Coxhill), and an organiser of the ongoing Mopomoso concert series (where all these duos were performed). Henry Lowther has been a much sought-after jazz trumpeter since the 1960s, but has always kept a toe in free waters. Pat Thomas is a remarkable pianist as well as being a dab hand at getting the most out of electronic keyboards, samplers and the like as can be heard here. In addition to the four duos, there is also a substantial solo from one of the pioneers of unaccompanied saxophone improvisation – someone who remains one of the best practitioners of the art.

"Special congratulations on the recent Lol Coxhill project. It strikes me as one of his outstanding records of modern times. Another Emanem triumph."

"The centrepiece is a solo 20-minute performance recorded at The Vortex in July 2000. Slightly moodier than Coxhill's usual, the piece illustrates what an accomplished improviser and soliloquist he is. With the agility of a snake charmer, he enraptures us with his soprano sax, leading us through different, often uncomfortable sounds, on an aural discovery journey.

This solo piece is preceded and followed by four duets recorded between 2001 and 2005. The pieces with Hugh Davies and Henry Lowther are relatively short (both around six minutes). Davies' invented metallic instruments make unusual partners for Coxhill, who manages to converse with them but fails to develop something really meaningful with them. On the other hand, the short piece with trumpeter Lowther shows a stronger community of thought, with hints back at Coxhill's past as a jazzman.

John Russell pulls off a strong, demanding and captivating duet with Coxhill, maybe a bit too exactly what one would expect from this pairing. The highlight of the album (besides the solo track) is the 18-minute duet with Pat Thomas on keyboards and samplers. Thomas's idiosyncratic sense of humour is a perfect match for Coxhill's sinuous playing and unpredictable mood swings."

" MORE TOGETHER THAN ALONE collects assorted duet recordings from 2001 to 2005, all recorded at London's longstanding free-jazz oasis the Red Rose, but the standout performance is a solo soprano sax piece recorded at the Vortex in 2000. It's a typically charged, fat-free 20-minute improvisation, a few surprising Ornette touches popping up in the middle, and offers a fine demonstration of Coxhill's ability to attack an idea from multiple directions, undercutting arrogant assertion with wobbly uncertainty or split-tone abstraction and occasionally seizing on a note as if to wring its neck. This may be 'free' music, but it has an implied, distended swing that will still set the foot tapping if you let it, and this is just as evident in the duet with Henry Lowther, which beautifully pits the trumpeter's pristine Wheelerian runs against Coxhill's prolapsed melodies. The other pieces find the saxophonist in his thorniest form, worrying at tiny, high-pitched crumbs of sound like a hen pecking at seeds. An encounter with Pat Thomas is particularly successful. Thomas's contributions on keyboard and sampler are admirably understated - gentle nudges and splutterings darkening into gathering-stormcloud static, and snippets of radio and TV voices reduced to circling insect buzzes - but the track eventually develops real gravitas, with Coxhill resorting to an extraordinary, racked lyricism. A track with guitarist John Russell is nearly as good, and the only disappointment is the brief duet with the late Hugh Davies (playing his homemade electroacoustic instruments), which starts out well but ultimately seems a bit underachieved."

"The extraordinarily versatile Lol Coxhill offers up another healthy slice of free improv, mainly in duet situations. The exception is a powerhouse solo performance from 2000, full of all the heartbreakingly beautiful and ever-human utterances we've come to associate with this master saxophonist and improviser. His huge sonic palette serves him well, especially on the saxophone-and-electronics duet with keyboardist Pat Thomas, where Coxhill responds in kind to every bleep, blurt, grind and almost-familiar snippet Thomas might send his way. While the duos with the late Hugh Davies and the equally versatile Henry Lowther are as exciting as one might expect, the real surprises occur with guitar virtuoso John Russell. Coxhill and Russell might as well have inhabited the same womb, so natural and telepathic is every interaction. Especially breathtaking is a long vibrato inflected B-Flat from Coxhill, with Russell constructing intervals around the note in perfect synchronicity."

"The duet with Hugh Davies is especially brain scrambling, with Coxhill's tactile, ticker-tape soloing matching Davies' cracked electronics in a fizz of Industrial spit. The solo track is as thorough an investigation of the soprano's unique ability to reconcile gobbling, alien feedback tones and woozy old-time swagger as you're likely to hear. But it's the collaboration with Pat Thomas, a great long-term foil, that best brings out Coxhill's deadpan, slapstick style, as he worries raspberries around Thomas's cartoon splats, farmyard noises and ricochet electronics."

"Relentlessly anarchic eruptions, pulverizing overtones and lyophilized reflections by the great Lol Coxhill, captured live between 2000 and 2005, are now offered as a constant reminder of how unnecessary (stupid, indeed) words can sound to describe freedom at large - and free music in the specific. This disc contains four duos and a solo that depict intimacies and contrasts resplending in unique lights. The track with Russell is particularly impressive, the musicians acting on parallel ways that somehow lead to the same place, like two cars traveling side to side with the drivers intent in making gestures to each other while holding the wheel with their pinkies, barely avoiding obstacles and other vehicles. Russell's sharp acousticity sparkles and tinkles, while the reedist seems to mock his companion's polyphonic dexterity via repeated spurts and hiccups. Underlined by the outside traffic noise, Alone at the Vortex demonstrates Coxhill's monstrous technique and the reinless fantasy that makes him one of the few soloists able to sustain lengthy improvisations without repeating a nanosecond of what already played, in a piece mixing timbral excursions against the laws of physics and blackbird-like garrulous visions. The Davies and Lowther duets are shorter, essentially constituting a different occasion for the musicians to interact according to methods ranging from the almost traditional to the previously unheard, while the correspondence with Thomas benefits from the latter's mixture of irony and unpredictability, which paired to Coxhill's genius generates a splendid mayhem, like a crazed radio station with partying aliens and an ecstatic saxophonist tattooing their skins with turntable needles."

"A delightful grab-bag of Lol in improvisational mode, one duet each with four additional players, but right at the heart of a long solo performance recorded at the Vortex on 4 July 2000. A couple of times it sounds as if the saxophonist may be referencing 'The Star Spangled Banner', but that may be wishful thinking.

It's always good to be reminded of Lowther's ongoing interest in free playing. There is enough of a 'jazz' feel in what they do together to differentiate it from the rest; nudged, restless figures, bluesy tones, a hint of counterpoint, a few high, bugling calls from the trumpeter. Russell is in exceptional form, while Thomas continues to astound with a vision that seems to depend on no-one and nothing but his own remarkable resources. And there's a reminder of the late, lamented Hugh Davies, an utterly unique presence."