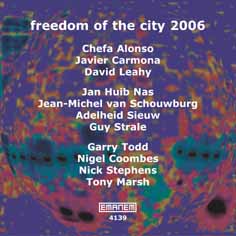 The 2006 FREEDOM OF THE CITY festival, London curated by Evan Parker, Eddie Prévost and me, consisted of four concerts on two consecutive days at the Red Rose in north London. As in previous years, the music was generally of a very high standard and well received by the audience.

Some of the performances from the 2006 festival have appeared on other CDs: The trio of Eddie Prévost, Alan Wilkinson and Joe Williamson can be heard on ALONG CAME JOE (Matchless 69); the duo of Terry Day and Charlotte Hug is on Day’s 2006 DUOS (Emanem 4137); the nine-piece Quaqua can be heard on John Russell’s ANALEKTA (Emanem 4138) along with the guitarist’s duos with Chefa Alonso and Garry Todd from Mopomoso gigs; and the Chris Burn Ensemble’s set will probably be released alongside other Ensemble concerts.

The opening trio on this CD comprises two musicians from Spain and one from New Zealand who have been based in London for a few years. They are all fairly frequent members of the London Improvisers Orchestra. Note that, in this trio, Chefa Alonso sticks to the soprano saxophone, and manages to find her own space in an already crowded field – in other contexts she can also be heard on percussion. Javier Carmona uses a fairly standard drum set, but with some interesting deviations, and must be rated as one of the best free percussionists. In such company, it’s not surprising that David Leahy has found his own voice on the bass.

The following quartet came from Brussels just for the festival, although they all have previously performed in London in other combinations. Guy Strale was perhaps the pioneer free improviser in Brussels - he is someone who can play just about any instrument. Jean-Michel van Schouwburg is one of the most prolific writers about music as well as being a vocalist of note. The husband-and-wife team of guitarist Jan Hub Nas and flautist Adelheid Sieuw are both very distinctive and non-conformist performers on their respective instruments.

The final quartet on this CD comprises four veteran London-based improvisers who have been part of the London scene for decades. The instrumentation may suggest jazz, but the actual music is group improvisation. Tenor saxophonist Garry Todd, the instigator of this quartet, has not been heard much in public over the years, but has maintained his capabilities in private. Violinist Nigel Coombes has also kept a low profile since his long tenure with the Spontaneous Music Ensemble. Bassist Nick Stephens was another long-term associate of John Stevens – he is now releasing his music on his Loose Torque CDR label. Drummer Tony Marsh has become fairy ubitiquous – including being heard on most of Evan Parker’s recent trio and quartet gigs at the Vortex.

There may not be any 'household names' on this CD, but all the musicians surely deserve to be much better known. Listen with an open mind, and you will hear some superb music.

"Although the three groupings here do not feature any 'household names', they do contain many decades of experience at playing improvised music, and that is what shines through on these performances. Besides the quality of their music, maybe the tracks here were also selected to stress the cosmopolitan nature of FOTC. The opening trio consists of two Spaniards and a New Zealander. Chefa Alonso proves herself to be a distinctive and fluent improviser on soprano sax. The prolonged passages where all three players are in full flight are exhilarating. They also sound distinctive, something that is not easy to achieve given the wealth of improvising sax-bass-drums trios around.

The 2006 festival was memorable for the visit of improvisers from Brussels' Collectif Inaudible, who played in various groupings together and with London-based players. (Their visit confirmed the impression created by their album CARDO of a highly inventive and slightly eccentric bunch.) Okgnig features one such performance by an all-Belgian quartet. In particular, Jean-Michel van Schouwburg is an amazing vocalist (not singer), producing an extraordinary array of sounds and effects. At times it sounds as if an over-excited dog has wandered onstage.

The members of the final quartet are seasoned veterans of the London improv scene with the likes of Derek Bailey, John Stevens and Evan Parker… and the London Improvisers' Orchestra. Saxophonist Garry Todd does not play often in public, but that is no reflection on his playing, which is free-flowing and very listenable. Although the quartet improvises, its music is the most jazz-tinged of the three tracks here.

To summarise, this edition of the annual Freedom of the City release is well up to the usual high standard; as essential as ever if you want to keep in touch with the improv scene in London. "

"Though it's always refreshing to hear some new talent - soprano saxophonist Chefa Alonso and percussionist Javier Carmona are new names to me, though I did have the pleasure of meeting the third member of their trio bassist David Leahy in Brussels last year - the 26-minute slab of music that kicks off this disc, Chácara isn't likely to have any improv nut falling off their barstool in surprise. Not that it isn't good at what it does, running the gamut from high-speed splatter to more pointillist textures via various permutations of solos and duos.

Stipple is a thorny but rewarding 32 minutes of music I've listened to about half a dozen times already without completely figuring out what Coombes is up to, though it's great to see him playing again. It's certainly not jazz, even if Stephens gives a few tantalising hints of the terrific free swing he's capable of, and Todd's meaty tenor is not totally Rollins-free.

To my ears the most rewarding track on the disc is its centrepiece, the awkwardly-titled Okgnig I, featuring a quartet of visiting Belgians. Readers of these pages and subscribers to the French magazine Improjazz will know Van Schouwburg as a writer of note, but he's also a versatile vocalist, even if his deep throated growls and gurgles inevitably recall Phil Minton. There's a lot of room for manoeuvre in the Belgians' music, and some splendid open-minded interplay between Nas and Sieuw - not surprisingly perhaps given the fact they're married."

"Two quartets and a trio featuring several less-known-than-usual artists, who nevertheless demonstrate that they belong in that tree of improvisation where succulent fruits of instrumental fantasy fall off the branches in every season.

In Chàchara, the trio of Chefa Alonso, David Leahy and Javier Carmona build important structures by alternating furious blowouts and more reflective, almost poised analyses of the quieter sides of dynamics, either respecting their joyful will to feel delivered by the very essence of sound, or calling silence to testimony about their sensitive intuitions.

Okgnig I presents a quartet from Brussels: Jean-Michel Von Schouwburg, Adelheid Sieuw, Jan Huib Nas and Guy Strale, the latter a true pioneer of free music in Belgium. The dialogue between Van Schouwburg's hysterical utterances and Sieuw's agitated flute and post-lyrical broken up vocalism is finely complemented by Strale's attentive percussive commitment, the 'real' timbre of Nas' guitar heard just every once in a while amidst lots of bumps, scratches and swashes. A few sections of this piece possess a dramatic theatrical aura - especially perceivable when Strale's piano enters the scene towards the end - that distances it from more characteristic settings heard in similar contexts.

The only 'famous' names belong to the second and final quartet, with Garry Todd, Nigel Coombes, Nick Stephens and Tony Marsh. Stipple begins like a drunken combo trying to find the way out of a pub, Todd and Coombes exchanging sliding lines and sliced stems while Stephens and Marsh look for a keyword to regroup the whole into coherence. They succeed without straining our auricular muscle, their timbral entities proclaiming a state of total independence from orchestral statism in a scribbled manifestation of technical nobility, their knotty dissertations portraying a ravishing creature dressed in rags."

"The so-called London improvised music scene has never been so geographically exclusive and the Freedom of the City festival, a yearly showcase for that tantalizingly international pool of musicians, documents beautifully the diversity of approach and the excitement of global collaboration. The 2006 festival was no exception and the three performances captured on this highlights disc brim with challenge and discovery. The first trio, comprising two performers from Spain and one from New Zealand, offer up a stop-and-start collage of hugely energetic improv, Chefa Alanso's soprano sax an extraordinary rediscovery for these ears. Here, she almost seems to be translating John Stevens' strangely beautiful vocal techniques to her instrument, warbled fourths in fascinating alternation with yips and squalls of controlled freedom that surprise and delight at every turn. Percussionist Javier Carmona and bassist David Leahy do not so much create space as propel Alanso and each other forward until those magic moments when the brakes are applied, making way for moments of intense introspection. The Brussels-based quartet brings humour to the proceedings, Jean Michel Van Schouwberg proving as fine a vocalist as he is eloquent a writer. He and Adelheid Sieuw slide and glide around each other in zany banter while Guy Strale brings on cinematic change, especially when exploring the piano's innards while Jan Huib Nas jigs merrily around the guitar's upper registers. The third group is a surprise, Garry Todd, Nigel Coombes, Nick Stephens and Tony Marsh achieving an enthralling mixture of sustain and juxtaposition. A moment near the beginning of the long piece finds Coombes inserting a violin note in just the appropriate place, one of those beautiful moments of communication that keeps fans of this music returning."