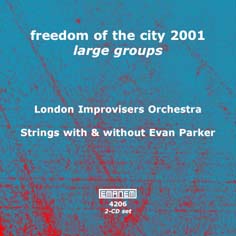 One of the aims of the FREEDOM OF THE CITY festival is to feature large improvising and part-improvising groups, especially the London Improvisers Orchestra, a remarkable phenomenon that just seems to go from strength to strength. Whilst improvising is usually thought of as a small group or even solo activity, there are plenty of musicians around who can make large group improvising work.

Two other large groups were featured in the 2001 festival. The Strings set revisits a recording session organised by Evan Parker some three years earlier. The results of this were so superb that they produced a triple CD album (STRINGS WITH EVAN PARKER, Emanem 4302). Some of the musicians who were unable to attend the 1998 session were able to perform at the festival, so the string ensemble was somewhat larger than previously.

Strings performed two very different, but equally fine improvisations at the festival - the first with just the strings and electronics players, the second with Parker added on soprano saxophone. Trick on the Speed of Making It is a mostly laid-back half-hour of exquisite string orchestra music, peppered with Hugh Davies’ amplified strings & springs, plus sampled sounds reprocessed by Kaffe Matthews. The second half of this piece was given an additional 'other worldly' feeling when Sylvia Hallett switched from violin to sarangi. The presence of the saxophone on Daylight Receptacle turned the ensemble into a more urgent and denser affair, with a somewhat concerto feel to it.

The following evening it was the turn of the London Improvisers Orchestra. This normally performs on the first Sunday of the month at the Red Rose in Holloway, but for the May concert it was temporarily transferred a few miles south to the Conway Hall, where at 39 strong it was the largest it has ever been. The whole of the concert is included on this album in the order of performance.

Some of the orchestra's developments have already been documented in two highly acclaimed double CDs (PROCEEDINGS Emanem 4201 and THE HEARING CONTINUES Emanem 4203) from 1999 and 2000. Over the last few years it has developed a strong feeling of camaraderie amongst its members - as Sylvia Hallett recently wrote in The Wire: "Playing with the LIO is both fun and gives a sense of a musical community."

"If there is doubt that improvised music can be successfully performed by Large groups, then the dozen players, 10 strings + two electronic manipulators, that constitute Strings with & without Evan Parker put this conjecture to rest. Trick on the Speed of Making It is half an hour of beautifully sustained motion, serene even. The second piece, with the addition of EP, ups the ante, his free-flowing melodic soprano carrying the orchestra along with new urgency.

The grand finalé is the complete concert of the 39-strong London Improvisers Orchestra. Each of the conductors utilises the orchestra in a quite different manner: Dave Tucker (Flower of Flesh and Blood) establishes the organic p ower, the vibrant character of the orchestra. Gigantic! Simon H Fell's Morton's Mobile, in contrast, is closer to breathing, subdued, the feeling set by two pianos at extreme pianissimo instilling the hushed stasis the composer was seeking. Caroline Kraabel's Group Dynamics Around the Slide is unsettling in its triangulated conduction. Steve Beresford, a talented bloke, always investigating, brings out elements that are not always obvious with his Concerto for Sylvia Hallett, herself the soloist. Superb! Phil Wachsmann's Double Rainbow, a compelling rolling tumble finding crescendos, has a certain spatial urgency involving the conductor as an integral element in the orchestra. The spiky, scurrying drama of Knut Aufermann's Birthday Piece using number boards (1-80) with the players looking for their possible birth dates as a cue, causing an ever changing stream of random sub-groups. In Terry Day's unusual piece he simultaneously conducts and recites his poem/composition An If, But, To and When which he describes as being 'about Dagenhamness; of an attitude born from an impoverished cultural background.' An admission of his roots. Formidable. And the grand finale, apparently a tradition, the London Improvisers Orchestra left to their own devices for a 33-minute free improvisation. To quote Martin Davidson, 'The performance goes through a whole kaleidoscope of aural colours and feelings. It's all to do with listening as much as playing - one of the hallmarks of the London improvising scene.' Couldn't have said it better myself."

"Unlike its companion release, SMALL GROUPS, this double CD only features two ensembles Strings with (and without) Evan Parker, and the London Improvisers Orchestra. In recent years, both have made very significant contributions both to the Emanem catalogue and to improvised music. As with the small groups release, this one provides a good way to sample these two ensembles, without investing in their own multiple disc releases. (Those who have already invested will doubtless want this new material.)

Large groupings are notoriously difficult settings for improvisation; at their worst, they can easily degenerate into a cacophony of individual voices with little or no relation to each other. In two very different ways, these ensembles have addressed and overcome that issue.

Strings with Evan Parker do so by using an instrumentation with its own internal unity; the strings here (including four violins, two cellos, two guitars and double bass) rarely sound in conflict and largely gel together. They sound quite different with and without Parker. Alone, they adopt a slowly evolving, laid-back approach that is occasionally punctuated by Hugh Davies' amplified strings and springs, or by Kaffe Matthews' reprocessed sampled sounds. When Parker joins them, the strings become more animated and energised, in response to the harsher sound of the saxophone.

LIO address the size issue mainly by ceding control to a series of composer/conductors drawn from their ranks. LIO grew out of Butch Morris's visit to London in 1997, in which he fulfilled the composer/conductor role with the large London Skyscraper grouping. Ever since, LIO have met and performed monthly, establishing a variable but largely stable personnel and a great sense of camaraderie. The musicians' familiarity with and respect for each other pays obvious dividends.

The compositions/conductions that the ensemble play are open to great differences in performance, as comparisons between the studio versions and these live renditions of Simon H. Fells Mortons Mobile and Knut Aufermann's Birthday Piece reveal. Rather than being prescriptive, the compositions provide organising principles that serve to tame the grouping's power and prevent cacophony. When they do let rip, as on sections of a recitation by Terry Day, they can be quite overwhelming. However, the closing piece is a long free improvisation that demonstrates the orchestra's particular ability to listen to each other and produce sensitive music without any composer/conductor."

"Emerging from a supportive community, FOTC's participants readily display a willingness to learn from each other as they explore the wealth of possible permutations within their number. For example, the String ensemble opening the LARGE GROUPS set with two length improvisations are sufficiently elastic in conception to incorporate Chris Burn's piano, Hugh Davies on amplified springs and strings, and Kaffe Matthews wielding laptop sampler from a seat in the audience, as well as nine string players. The opener unfurls gradually, a rolling continuum of small gestures with spots of turbulence and stretches of tranquillity, made strange in places by the mournful wailing of Sylvia Hallett's sarangi. For the second piece the string players are joined by Evan Parker, whose soprano sax spins and darts over a steady yet variegated surface of rubbed and plucked sounds.

The remainder of the double-album is given over to the flourishing London Improvisers Orchestra, a massive group that here channels huge energies through seven compositions for improvisers, the shifts into full improvisatory mode for an exhilarating final half-hour. There were 39 members in attendance, but skilled listening, shared understanding and shrew conducting keeps the juggernaut on course throughout. The depth of the total group sound is awesome. Reined in, as on Simon H Fell's Morton's Mobile, the LIO broods magnificently. The entire programme is invigorating, but Terry Day's recitation of his poem An if, but, to and when, punctuated by the return of the fabulous rampaging herd, is specially irresistible."