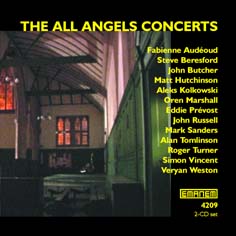 THE ALL ANGELS CONCERTS

This collection of concert recordings hopefully reveals as much about 'All Angels' the venue as it does the music and musicians. It really was a special environment to perform and listen in. Most, if not all, who played there expressed likewise. The music always sounded so good. Near perfect acoustics, designed at the turn of the last century to carry the spoken words of the church service to all corners of the building - no need for a PA in those days. You could hear the smallest sounds without having to strain your ears and even denser musical material was well contained within it's heavy stone walls, carried and dispersed appropriately. OK, there's was some traffic noise that used to filter in and the ticking of the church clock could be a little intrusive, but this never stole anything from the music.

The selection of pieces contained on these two CDs isn't intended to be a 'best of' - so much fine music couldn't be included for a number of reasons, more often than not a technical problem on the tape or the absence of a recording. Of the twenty-one 'All Angels' concerts, three were not recorded.

The first 'All Angels' gig was held in the hall of the Norman Shaw church, St. Michael and All Angels in May 1999. Our time there was to be short lived as the hall was soon to be converted, unfortunately ruining its incredible acoustic. We continued next door in the main church, which was far more resonant. During the three years of concerts we developed an attentive and sizeable audience, despite being warned that there wouldn't be one for improvised music in West London.

The aim was to break with the improv gig norm of the London scene and get away from the dead acoustics of carpeted rooms above pubs with infringing jukebox and pub noise; to find a space where the subtleties and detail of the music could be heard. We also wanted to provide a regular platform for musicians to perform solo.

It seems curious that we have compiled a CD of the music at 'All Angels' because at the time I increasingly saw recording as antithetical to improvised music, the microphone drawing a line between audience and performer, fixing and objectifying the spontaneity. Now I see it as an invaluable document of performances that would otherwise have disappeared into the ether.

'All Angels' was about live music and not all of the performances ended up on tape, the most absorbing of these being Lol Coxhill's stunning solo.

This CD is a document of some of the special music that was created at 'All Angels' by seminal musicians on the London and international improvising scene. Thanks to the musicians and all who helped.

Rhodri Davies and Mark Wastell approached me to issue a selection of recordings made at their series of concerts at St Michael's and All Angels. I had been to several of these concerts, and heard some wonderful music there, so I was very keen on the idea. Fortunately, Tim Fletcher had recorded most of the concerts, so the two organisers went through his DATs, and chose what they considered to be the best performances (apart from those that had been, or are about to, used on other CDs). Davies and Wastell chose not to be in this collection, even though they had been a part of several fine performances, as they wanted it to reflect what they were doing as concert promoters.

The music is presented in the order of performance. Fabienne Audéoud can be heard in one of the earliest concerts that took place in the church hall, before the series moved into the church itself. The last concert, a sequence of six soloists, ended with Veryan Weston on the church organ - the only time the instrument had been used in the series. In between you will find some very fine and very varied solo and duo performances.

Note that all the music is freely improvised, except for the piece by Aleks Kolkowski which 'is semi-composed, the score being based on musical interpretations of minute sections from a flower illustration.'

"I listened to THE ALL ANGELS CONCERTS several times. Its actually one of my favourite CDs. The end of Veryan's organ solo is amazing!!"

"This double CD set contains a handful of extremely talented musicians and a big bunch of enjoyable moments, even from artists I had the pleasure of listening for the first time. Such is the case with vocalist Fabienne Audeoud, whose opening J'allume la lumiere? mixes opera, theatre and a little Diamanda Galas with great intensity. Then you find crystal-clear concepts and fully realised schemes, especially when hearing the powerful notes of Alan Tomlinson on trombone or the typically bare-stripped string plucking of guitarist John Russell. Keyboard wizard Veryan Weston uses church organ to describe something that's finished but still alive in its spirit; instead, the duos of Oren Marshall/Mark Sanders (tuba and percussion) and Steve Beresford/Roger Turner (electronics and percussion) share a sort of desire for finding something unexpected, but at the same time known to be hiding after a corner. While Aleks Kolkowski's Stroh violin demonstrates how to make great music with the minimum of means, John Butcher and Matt Hutchinson (saxes, synth, electronics) just blow your senses off with a magnificent meshing of electroacoustic colours. But the two highest moments of this compilation come one after another, on disc 2: Eddie Prevost's splendid On the point of a needle is a 19-minute long percussive documentary, taking snapshots of post-industrial urban areas and mixing them with delicate meditations reminding me of people forced out of their own place; Hommage by Simon Vincent is stunning in its beauty, a wonderful representation of that deep sorrow that we'd like to cancel from our life once and for all, but never manage to... then we observe it near - and know it's necessary to fight on."

"All explore a form of non-idiomatic improvisation that relies on interactions with natural acoustics and the use of silence as a backdrop, without turning the latter into a rigid rule. Each track mesmerises the listener, the occasional (very faint) leakage of street sounds only adding authenticity to the experience. The duet by John Butcher and Matt Hutchinson and Eddie Prévost's solo stand out, but the piece by Oren Marshall (tuba) and Mark Sanders (percussion) is probably the biggest surprise - against expectations. Clocking in at a generous 157 minutes, this album is to be savoured one track at a time. Recommended."

"The space is indeed remarkable and these recordings capture its essence quite well. It's hard to single out one performance, but John Butcher's saxophone meshed with Matt Hutchinson's electronics and placed in this cavernous space makes a remarkable sound. Butcher's saxophone flurries and squalls careen around the space and collide with Hutchinson's electronic barrage. Alan Tomlinson's trombone sound, which is already big, is further amplified by the space's acoustics and he takes full advantage of it. At the other end of the spectrum is Eddie Prévost's performance, full of hushed gongs and scraped cymbals and small gestures which are beautifully picked up by the space. The most interesting characteristic about these performances is that the artists sound as if they're not only creating great music, but that they're having fun doing it as well. What is contained on these two discs is a valuable document."

"The seven solos and three duets offer a generous sampling of British non-idiomatic improvisation, balancing a mastery of extended technique, an ear for acoustic resonance, and a penchant for odd instrumental combinations.

While the three duos aren't quite as successful as some of the solos, they have a raggedd sense of experimentation. The real surprise is the tuba/percussion duo by Oren Marshall and Mark Sanders, which displays an unexpected stately delicacy. John Butcher pairs up with Matt Hutchinson on synth and electronics for a dialogue that msses the subtle complexities of his duets with Phil Durrant, but still have a sense of dynamic discovery. Steve Beresford on electronics and objects matches wits with Roger Turner for a clattering duo that jolts and stumbles along with an anarchic glee.

This CD, along with a handful of others, documents the magic confluence of setting and artistry that the series hosted."

"The music runs the gamut from singer Fabienne Audeoud, the Euro equivalent of Shelley Hirsch, to Eddie Prevost's bang on a barrel drum and gong. This compilation covers some new sounds as well as old favourites. Of special note here was Alan Tomlinson's broad and at time bawdy trombone solos and the Butcher/Hutchinson saxophone meets electronics duo. Butcher plays over some very old-school computer soundings. This is a great sampler."

"To hear this recording really is to reappraise free improvisation all over again. Quiet marvellous, but how will we ever go back to gigs in grotty pubs?"