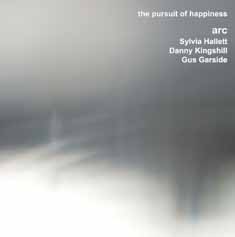 THE PURSUIT OF HAPPINESS

First formed in 1988, arc have developed, through improvisation, a collective language that draws on the European textures of the violin family. This is their first album to use live electronics. They previously released two albums of acoustic improvisations:
Remembering - Uneasy Listening, 1992
Out of Amber - Slam, 1993

"This album's title justifiably parallels the trio's radiant synergy. With their third release as a unit, this 2009 outing signifies the artists' initial employment of live electronics - a component that has been gaining steam with improvisation-centric bands over the years. But like anything else, good taste and using effects as an instrument stand as the antithesis of some heavily employed electronics configurations that can at times, saturate core musical aspects. Here, the unit seamlessly combines the best of both worlds into a distinct integration of free-flowing concepts and practices.

The trio's design consists of three instruments spanning low to upper register sounds and tonal contrasts. It conjures up an organic acoustic element nicely offset by the streaming and accenting live electronics factor. Cellist Danny Kingshall's creaky arco-passages intersect with bassist Gus Garside's fluent notes and violinist Sylvia Hallett's intense staccato phrasings. With the electronics, they create motifs that could spark thoughts of a machine shop running on old equipment in need of repair, yet it's a divergent program, teeming with subtle surprises.

The musicians interrogate each other via probing dialogues, hued with emotive sentiment and avant-minimalism. On Phantom Caravan, Hallett and Kingshill's wordless voice parts ride atop droning strings and frantic developments. They also engineer numerous tension and release type statements in concert with free-chamber type excursions. Hence, they embrace innumerable angles, variances in pitch and depth, and render a variety of cunning propositions throughout. "

"Every operation and (more or less premeditated) occurrence that this recording introduces appears to have been seriously considered: there's no question about an almost total lack of light-heartedness and joviality in favour of something that echoes the creative uncertainties (typically leading to great discoveries) and the limitlessness of the field of research probed by three artists who sound like participating in a first meeting, in a positive sense.

Even in absence of excessive smiling the record manages to steer well clear of pretentiousness and intellectual obesity. The musicians' complete adherence to a credo of darkish melodic elongations and textural proficiency, the extensive treatments of the material with classy instrumental dignity - no preparations really detectable, just the uncontaminated tones of the whole gamut of bowed strings vibrating - are enough to establish an atmosphere whose severity is counterbalanced by the diverse contrapuntal permutations that these improvisations show. Hallett, Kingshill and Garside are concentrated yet never self-centred, the see-through quality of the final result the perfect evidence of a honest attitude, a will to accept any consequence for what they decide to play.

This is beautifully speckled music that can't be possibly approached without razor-sharp attentiveness: you must follow its uncertain lines, evaporating contradictions, corpulent resonances and dissonant flights while getting rid of the presumption of having understood the mechanics at work. Only through this method one realizes how handsome these creations are."

"Arc is an exploration of possibilities for string trio. Their third CD shows an appropriate growth in maturity without lessening of inquisitiveness; the addition of discreet live electronics expands the ensemble sound. Titles like Sand Maps suggest a descriptive programme, but no single route created these 11 diverse improvised pieces. Phantom Caravan investigates correspondences between vocal, instrumental and electro-acoustic sounds that creak, bleat or swoop. The harmonically animated near-stasis of Sand Maps recalls the sonic microcosms of Glacinto Scelsi's composed music. Beyond the obvious familial drama of violins in conference, Arc are effectively making space for a personalised chamber music where creative immediacy is in dialogue with historical echoes, a stimulating space where spontaneity and evocation coincide."