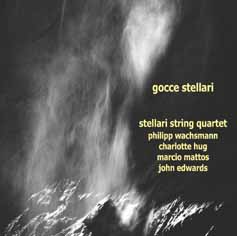 1 - 4 digital concert recordings made in Poschiavo, Switzerland at the UNCOOL festival
by Lara Persia (RSI) - 2007 May 17
5 - 7 digital studio recordings made near London
by Philipp Wachsmann - 2006 September 9
Total time 69:25

When I first put this CD on and started to listen from the beginning, I didn't recognise the characteristic sounds or distinguish the 'voice' of each musician, although I know them all well and have had the pleasure of hearing them many times in various contexts. This was a thoughtful, rigorous and austere string quartet music, very focused and in a register (musical and intellectual) that seemed new to me. It was only towards the very end of the first long piece that I started to hear very small snatches of playing in which I really recognised Philipp Wachsmann's lyricism, Charlotte Hug's command of and fascination with textures, John Edwards' vitality and dynamic range and Marcio Mattos' resourcefulness. As I listened on through the CD, I continued to hear more that sounded new and less that was familiar, and it was very thrilling to listen to these new sounds and ways of interacting.

This made me reflect on the productive tension, in life and in music, between improvising and being yourself – not that these two things are diametrical opposites, but they do tend to pull in different directions, and are sometimes hard to reconcile.

It's evident that one is required to be literally oneself – and much beautiful music comes out of the plain joyfulness of people being and expressing truly who they are – but the thing that's specific to improvising is that it demands that the music be made afresh each time: the more aspects of the music are unique to that moment, the more improvised that music is.

This means that after working for a long time on improvising, the musician eventually comes up against the fact that the self that she brings to each new playing situation is still the same one. What to do? Clearly, it's possible to make novel sounds at random, but this is a bit of a lottery and means the musician has let go perhaps too completely of herself, her love and understanding of particular kinds of sounds, gestures, moods... and maybe risks letting go of her reasons for playing music in the first place.

On the other hand, there is a lot of excellent music made in which players remain frankly themselves and rejoice in an interaction that, though improvised, still has something familiar about it, like a stimulating family conversation.

What I hear on this CD is four people who have worked so long and hard on improvising, and are so brave and trusting of each other, that when they intersect here they leave their usual ways of being and playing behind and forge new ways, and completely new music, for the occasion. This balancing act, this apotheosis of communication, is what makes music indispensable to the human organism.

"Refreshingly, the music here seeks to neither emulate nor deliberately avoid conventional notions of the string quartet. Instead, each of the four players brings their own distinctive voice and approach to their instrument plus openness to the music produced by the others. Across four tracks recorded live in concert in Switzerland in May 2007 and three studio tracks recorded in London the previous September, the four voices interact and immerse themselves in the collective identity of the quartet.

Telltale trademark traces of the individuals remain evident - Wachsmann's soaring glissandi, Hug's simultaneous bowing of all four viola strings, the gravitas of Mattos's stately bowing, Edwards' percussive blows to the body of his bass - yet the individual voices are more often subsumed into a dialogue in which their contributions overlap both in time and in frequency, creating a whole greater than any of its parts. It is a fascinating exercise to try to remain focused on one player throughout, but ultimately that is as difficult as following one particular strand through a richly woven tapestry."

"'Gocce stellari' (stellar droplets) are stars born through the force of gravity, as gas and dust slowly contract together until nuclear fusion ignites them. It's a nifty analogy for the music, the four players concentrating the 'qas and dust' of free improvisation (fine, texture, and timbre) to create spontaneous constructions full of austere intensity. Mining the essence of their instruments, they utilize an expansive array of sound from dark arco to dry scratches, buzzing overtones, and richly layered harmonics. Even at its freest, there's a conceptual rigor to the music, which gracefully bridges the worlds of contemporary classical music and free improvisation."

"The title (Italian for 'stellar droplets') comes from Orion Nebula's newborn stars, generated by the nuclear fusion of huge globules of gas and dust; stars are also the origin of the seven tracks' names. Thus, associating the adjective 'stellar' to the playing heard in this CD becomes commonplace. Philipp Wachsmann (violin), Charlotte Hug (viola), Marcio Mattos (cello) and John Edwards (double bass) conduct business with a combination of formal respect for the configurational clarity of a hypothetical composition: these pieces impressively resemble the upshot of written scores - with more than a hint to XX century's literature - exalted and enriched by the kind of impulsive improvisation that one expects from musicians at this level of instrumental command.

In the notes, Caroline Kraabel makes a very good point about the initial trouble in recognising the single voices even after many years of listening to them. Here lies the reason of this record's accomplishment: the global yield of polychrome pitches, fractal percussiveness and structural multiplicity overcome the difficulties elicited by the thorny convolutions and atonal spirals - permeated by a measure of intransigency - that the quartet constantly delivers. The performers apply a logic of intelligibility to everything they play, dividing the stereo space in well-defined sectors, remaining disengaged from rigid rules yet appearing solid all along. The typical characters connected to contemporary music for strings - including the exploitation of rarely attended parts of the instruments - are astutely employed, proof of a technically enlightened maturity. Serialism, lyricism, dronage and the average reviewer's pet quote - Lachenmann (yeah, let's go and join the name-throwing party…) - get evoked and instantly disposed of in a matter of seconds.

Ultimately, the best way to tackle GOCCE STELLARI is absorbing it little by little over repeated listens, at first being flattened and somewhat pushed back by its bittersweet vigour, then dissecting the components to individuate and separate nuances and details. Both acts lead to the same conclusion: this is a persuasive record."

"Since this blog has often turned its focus towards the twin poles of free improvisation and contemporary classical I figured, why not post an album that combines both of them, and in an interesting way at that? What we have here are four string players forming a string quartet, indeed one of the ensemble forms most rigorously associated with contemporary classical music, intent on improvising their way against the established cultural grain. And with names such as Philipp Wachsmann, Charlotte Hug, Marcio Mattos and John Edwards, such an ambitious project does not seem out of reach of success.

And succeed it does, at least to my humble tastes. As expected, the group is very much focused on texture, timbre and spontaneous interaction, as opposed to the more commonly rhythmical and melodious workouts often found within the classical music world. Strings rumble, screech, drone and creak in all ways imaginable, the players all the time upholding a certain tension, effectively giving the project the frame necessary for it not to feel unfocused or random. Thankfully, though, there's also a lot of diversity (in relative terms, of course) to these pieces, and a sense of the four of them wanting to create new textures and sounds in a freer way than what's usually the case with this instrumentation. What's perhaps most surprising, though, is how much it still sounds like a modern atonal composition, which might be mostly due to the performers' listening skills and sense for somewhat traditional dynamics

All in all, I found this an interesting and very enjoyable album, and, as a result of the concept, it should appeal to fans of both contemporary classical and free improv (or none, depending on how much of a purist you are), and indeed to readers of this blog. Enjoy!"