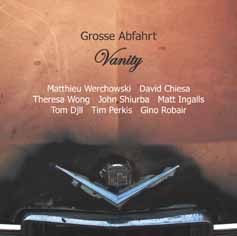 Grosse Abfahrt is a project I started to explore a number of problems in freely improvised music. The first and most obvious of these is the problem of ensemble size, which I wanted to tackle head-on: GA ensembles are always of eight to ten players. This range seems to settle in a locale where there is a strong opportunity for individual sound-agents to emerge and make a statement against the ensemble backdrop, and also for the entire ensemble to cohere into long-form structures that transcend the productions of conventional improvised-music sociality (another problem addressed). How these ensembles are collected takes up another problem: that of the conflict between fluency and comfort among improvising compadres. Fluency between players’ languages and approaches is desirable, of course; however, it can lead to complacency.

Grosse Abfahrt is made up of a core group of five players which does not vary. These people are all very familiar with each other’s strengths, preferences, and foibles, yet they do not play as a quintet (well, on one occasion we did). To this core I add musicians who have not played with any of the core members. Often, these outsiders come from far away, and are playing as duos or trios already, so they arrive with some comfort and fluency in their own musical relationship. How these two dynamics come together to create music, with practically no introduction (much less, rehearsal), is our practice.

For the present realisation, I added one more player (Theresa Wong) whose instrument was of the same family as the outsiders. Being a local, she was to perform as a kind of ‘bridge’ between the instrumental sounds of the Werchowski-Chiesa duo on the one hand, and the social identity of the core quintet. The Werchowski-Chiesa duo played a sensitive and soulful opening set, the second half of which is presented here as HANG BAT5 OVER. With Theresa on cello, the three chamber strings formed a molten core to this Grosse Abfahrt. The music seemed to assemble itself into short pieces much of the time, although the evening featured a couple of longer discursions in the traditional Grosse Abfahrt style.

"If a successful improvisation is based on the listener's impossibility of remembering details at the end of the program, having been left with a merely essential idea of what the music intended to investigate, then VANITY is one of the most significant albums released in recent times. Grosse Abfahrt's core members - Tom Djll, Matt Ingalls, John Shiurba, Gino Robair and Tim Perkis - were joined by a string trio consisting of Theresa Wong, David Chiesa and Matthieu Werchowski in this performance recorded in Oakland, April 2008. The latter two musicians are featured in a gorgeous duo - the only track which doesn't feature the rest of the group - called Hang Bat5 Over; all the titles, in Djll's words, derive from 'vanity plates, the curious stamped-metal bumper-culture expressions of people who like to broadcast their character and proclivities via licence plates'. The curiosity resides in the harsh contrast between the multifaceted intelligence that transpires from the musical interaction in comparison with the sociological misery generated by the concept of calling people's attention on oneself through such a stupid thing.

The kind of sonic tampering utilized by Grosse Abfahrt in this particular occasion lies well below the calamitous level, privileging temporary conjunctions of carefully sculpted timbres and deviations from typical instrumental colours to fuse the distinct instances into an 'incompletely collective' aggregation that leaves the single parts always perfectly visible. A slightly outlandish diversion might be represented by the opening of Zoundz - Yours To Discover, a nearly human raucousness introducing a sort of regulated randomness that mixes reed-cum-electronics high register ramifications and the atonal elegance of Webern-reminding combinations of strings. Live Free Or Die Delphi2 is perhaps the place in which semi-solid abstraction and elemental concentration are more effectively balanced, and also where ruptured silence becomes an important factor. Overall, the players maintain a degree of conscientiousness during repeated cross-examinations, applying a fine blend of ever-present awareness and recombined disorderliness, voluntarily restraining themselves in a power reduction that increases gestural gravity, ultimately leaving the appealing qualities of these small conglomerates in evidence, but not necessarily accessible to everybody. If you didn't understand a word of what I just wrote, try this: a great record."

"Despite the contrasting instrumentations of the core and the outsiders, it never feels like there is competition - or combat - between the two. Rather, they complement and interact with each other. At times the electronics seem to emulate the sounds of the strings, fitting in with them but creating a distorting-mirror effect. The playing of both the core and the strings together frequently creates prolonged drone passages, which are overlaid with short passages of solo playing that bubble up to the surface, linger awhile and then merge back into the ensemble. Overall, there is quietude about the music; it evolves at a gentle, unforced pace that fits naturally with the sounds of the instruments.

Somewhat atypical of the album as a whole is Hang Bat5 Over, just featuring the duo of Werchowski and Chiesa, without the core. The two engage in a prolonged - over ten minute - exchange of bowing that ebbs and flows between them with neither dominating. The bass and violin have sounds distinct enough to allow us to hear their individual lines, which weave in and around each other to good effect. It is one of those tracks that almost demands to be played again as soon as it is over, something that is equally true of the album as a whole. A good balance between fluency and comfort, with no hint of complacency."

"I'm sure that when trumpeter Tom Djll seized on the phrase 'Grosse Abfahrt' for the name of this semi-regular group project, he was aware that English-speakers might regard the group name as an onomatopoeic representation of what your typical free-improv session sounds like, even if the phrase's actual meaning - 'great departure' - is more representative of the highly disciplined way these players deal with the potentially chaotic prospect of large-ensemble improvisation.

The central problematic (as they say in academe) in Grosse Abfahrt Mk III is the way the quintet's highly abstracted and often electronic group sound enters into dialogue with the much more unified and familiar sound of a string trio. Though mostly this music's about wavering, cumulative textures and near-miss drones, my favourite moments are often when these tensions really come to the fore in explicit juxtaposition, like the gorgeous bass pizz that kicks off Live Free or Die Delphi2 with a little finger-tapping ostinato while twinkling electronics slowly twist the universe into a knot, until, after the ensemble lurches into a momentary silence, the string trio flares up on its own. The enigmatic nature of the music is accentuated by the excluded-middle approach to duration: a bunch of really short tracks (usually about a minute and change), plus four long ones, which are considerably easier to get a hold on. One of the longer pieces is actually a Chiesa / Werchowski duet: at first dominated by the bassist's incredibly elongated lyricism, the piece then undergoes an astonishing sea change as the violinist breaks in with enormous extended tremolos that create the illusion of an entire choir of voices - probably the most dramatic moment on the entire album."

"The value of Djll's reflections on group structure and interaction are apparent everywhere in the music. The special talents of Werchowski and Chiesa are apparent in an excerpt from an opening duo performance called Hang Bat5 Over, a performance of such resonant and meditative depth that it suggests some pieces by Arvo Pärt. Combining the strings with Wong and Shiurba gives a certain string dominance to the ensemble, and these sounds combine with the winds and electronics to emphasize sustained tones and rich, varied textures. Many of the full ensemble tracks are very brief. The opening Sportsman's Paradise Music LA is less than a minute long and contrasts Webern-like evanescence with Chiesa's contrarian pedal tone. Cthulu Kids First just a little longer and highly abrasive. As bracing as the miniatures are, though, it's the more expansive improvisations that leave the strongest impression, like the sustained silence that develops between constant high and low pitches on Kablamo, a silence developed not by the absence of sound but by a missing frequency range, or the dialogue between string harmonics and electronics in CA Mirrors. Throughout this is improvised music of the very first order, and Djll's visual artwork, colour photos of old cars and vanity plates, is as obliquely engaging as the music."

"Music that manages to avoid the usual behaviour of this kind of improv, without actually prposing new avenues. Still a strong release full of sonic mysteries."