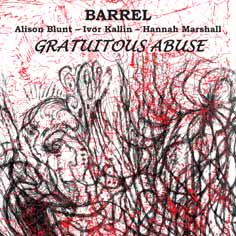 These three musicians have been performing in various combinations with others on the London improvising scene for several years. As well as the numerous small groups they have participated in, all three are members of the London Improvisers Orchestra. About six years ago Alison and Ivor were often playing gigs together either as a duo or with a third string player. They were impressive enough to be invited to the 2007 Freedom of the City festival, where they chose to add Hannah, with whom Alison had previously performed duos. That first performance of this trio was so musically successful that they decided to continue as such, and chose to call the group Barrel as it involved a lot of scraping. Since then they have often played in various locations in and around London, and this album is their choice of two of the resulting recordings. There are also two pieces from a 'studio' session at John Bisset’s home. The music on this CD is certainly a very worthy addition to the series of string groups that have been featured on Emanem.

Alison was born within earshot of the Indian Ocean and grew up with first the calls of peacocks and rabbits then the bleating of Herdwick sheep. Sounds of city life have since taken precedence, interrupted by grunting wombats, clicking possums and meowing cats.

Ivor grew up in the Yiddish/Glaswegian speaking ghetto of Strathbungo (hence his fluency in Glaswiddish). He had to grow his own beard to provide an abundant supply of bow hair, as horses were in short supply. However, he has recently acquired a fine horse.

Hannah is from London. She has made much use of tastes, sounds, and hairstyles ranging from quiet, violent, ungeneric, feverish, & simple, with a collection of musical and animal characters whose breadth matches these qualities, but may also include eccentric, beautiful, and dirty.

"Barrel's music, they admit, involves a lot of scraping. Initially the trios genetic make-up means it is difficult for the listener to peer through the shadow of the classical tradition or the minimalist avant-garde and hear the sound that's actually there. Yet by the final piece, Barrel sound unlike anything else. Flurries of notes and clunky bridge nudge noise flutter around gracefully drunken descends, three dowager duchesses sliding down the banister in a rain of ripped confetti."

"Barrel never sounds like a classical string grouping; instead, it is unmistakably an improvising string trio that steers clear of the clichés and well-worn pathways of chamber music and produces its own fresh, vibrant music. The members of Barrel display the effects of playing together over a period of years; they are well tuned into each others' playing styles and reactions, leading to close, tight improvising involving all three equally, mostly simultaneously.

The shortest track (at under two minutes) is Soft Porn & Hard Cheese, which opens with brief chords played by everyone - original chords, but as close as they get to ensemble playing here - before launching into rapid-fire exchanges that are breathtaking and probably could not have been sustained for a prolonged period. On the other three tracks, things unfold at a more subdued pace but one that is sufficiently brisk to set pulses racing. All three players contribute to an ever-shifting collage of pleasingly melodic phrases and fragments that is not dominated by any one of them. Because of their instruments' pitches and tonal qualities, Blunt and Kallin's playing occasionally becomes entwined, while Marshall's cello remains distinct and clear in the lower register, but more often the three complement each other, combining into one integrated entity.

A playful sense of good humour, fun and occasional mischief pervades the group and album. It begins with the group name Barrel, which came about as the three contend they do "a lot of scraping," and extends to the titles of the album and its tracks as well as the tone of the players' brief autobiographic sketches in the sleeve notes. In the music, it is most obvious in their occasional use of their voices to complement or contrast with the sound of the strings. Blunt's high pitched squeals and whoops are offset by Kallin's more guttural interjections, splutterings, growls and mouth music. GRATUITOUS ABUSE is a gem from start to finish, and a worthy addition to the Emanem canon."

"Avant-garde or free-form improvisation doesn't always need to be austere or devoid of character. Essentially, these London based improvisers reaffirm those notions in vibrant fashion via these invigorating works.

The trio exercises a gamut of emotively charged and highly expressionistic movements. They play tricks with your neural responses via a layered format where disparate tonalities augment the swerving dialogues, tinted with humour. Hence, the humorous track titles signal a light-hearted slant, but the trio's methodology includes, unsettling and creaky foundations amid elusive melodies and frenetic breakouts.

The artists glean the most out of their instruments capabilities with fervent plucking episodes, harrowing lines, brusque accents, and rhythmically charged tapping exchanges. The format is heady, yet jovial. And they weave microtonal and minimalist-style patterns into the grand mix, which are components that add to the trio's depth and keen use of space. They tug, scrape, and pull more than a few tricks out of the hat, while venturing into avant-chamber passages. But the shifting strategy offers a continually oscillating dynamic, steeped within an organic sound.

It's a musical world without borders, especially when the group operates at a dizzying pace. Unanticipated surprises, heated arguments and subtle hues are among many redeeming facets by a band that sometimes morphs a steely, rough-hewn edge into warmly coated mosaics."

"The British trio Barrel has created a set that is revolutionary, funny and breathtakingly audacious. To the uninitiated, this trio of string virtuosos might sound like musical terrorists. However, it is much more than merely a group of shock artists. Genuine creativity and musical innovation is at the heart of the music on this album; as is extreme humour that takes its cue from Dadaism. In fact it is as if the trio has swallowed the great painter Salvador Dali whole and regurgitated him here with chilling accuracy, rendering his melted imagery with its own sense of musical liquefaction.

From Dali Barrel also gets a certain almost shocking humour as well. Musical portraits such as Sklatch: unseemly semi-liquid mess conjure images of maddening drama and genuine horror in music, as much like a musical reproduction of The Persistence of Memory as it is the horror that emerged from Robert Fripp and Pete Sinfield at the height of their days in King Crimson, though Barrel's approach is softer. Humour pervades in the same manner as Frank Zappa brought to his music; so, even when making music that follows a tonal path, quirkiness in the form of shrieks, howls and remarkably twisted harmonies are performed with alacrity, in not-so-mock seriousness.

"A while back, Emanem’s honcho Martin Davidson responded bitingly to a writer who lamented the excessive continuance of one of his label’s CDs by inviting him to listen to smaller parts of the music in order to dilute the aural weariness. This kind of tactics would not work in any case with GRATUITOUS ABUSE, a rattling album from 2011 soaking with immense technical know-how (and, that’s right, irony) that lasts a little less than 80 minutes and should be enjoyed as a totality to embrace its artistic consequence from A to Z. The four tracks, all recorded live with the inherent 'on-location presences' of a quintessential improvisation gig mainly deal with concepts of precarious counterpoint and choppy (a)tonal/timbral modification without any sort of forewarning.

The literature of wooden corrugation presented by the trio is a joy to hear, well beyond the squeak-and-scrub facade (which, incidentally, lies at the basis of the group’s name). Outpourings of dishevelled superimpositions abound, urgent acceptance of non-resident upper partials yielding harvests of insupposable clusters. Apparently, 'smoothness' is considered a foreign word; and yet, a singular proneness to an off-balance melodicism of sorts delineate orchestral paragraphs that the most dogmatic audiences might even come to take account of. Decades of instrumental practice along and against the tradition blended inside an intermutual jargon that takes something from the classic and the absurd in equal doses. Heterogeneous composites causing inflammatory euphoria."