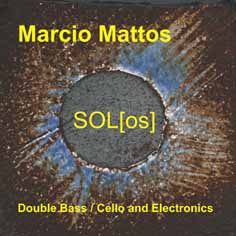 Marcio Mattos’s first instrument was the cello. He took a few lessons on it, but then the youthful urge to play something sexier won out and the instrument was resigned to its case. Instead, an acoustic guitar was acquired, learnt, then played to semi pro-level in bossa nova bands.

It was during the later semi-pro years that Mattos discovered jazz and, with it, the double bass. He’d graduated to composing and arranging some of the band’s material, and felt a bass would help build the harmonic potential of the group, but there was seemingly no place for it in the line-ups he played in.

So the guitar went, and the bossa nova with it. In their place came that double bass and a growing interest in improvisation and contemporary music, setting Mattos on a course that took him first to the Villa-Lobos institute in Rio and the politically-charged avant garde, then on to Europe and international renown, thanks largely to his long-term involvements in Britain, initially with drummers John Stevens and Eddie Prévost, and later with saxophonist Elton Dean at the cutting edge of free jazz.

So what of the cello? During the early 1980s it made a discreet comeback. Playing it was something he did initially in the privacy of his home, just for pleasure. Then through the prism of his experience as a bassist he began to look at the instrument anew, finding different possibilities in the increased pitch range at his disposal. By 1983 he was playing it on stage, initially as another acoustic sound source, and later with the addition of simple electronics with which he could further exploit the instrument’s greater tonal malleability. The cello was, he said, 'the bit of the bass that was missing; it’s only now that I feel I have the complete toolkit'.

Doubling up on instruments is something that saxophone players have been doing for years. So why is it so rare for string players to do similarly? As these ten real-time solo improvisations illustrate with aplomb, the conventional and extended playing techniques are, in effect, transportable between cello and double bass; it’s the different functional profiles these instruments have developed in the jazz and classical worlds that divide them. By stripping away these conventions Mattos gives us a refreshed view of music for strings, one that is considered, coherent and utterly convincing.