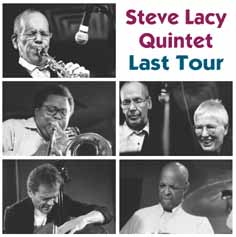 The last tour by this quintet started in the middle of 2003 with a week at Iridium in New York City. It continued with three or four batches of gigs in several locations around North America and ended with two concerts (and a party at home) in Boston, where Steve Lacy and Irene Aebi were then living. All but one piece from the first of these two concerts has been selected for this release, as technical problems marred parts of the following day’s set. The music presented here is unedited and in the order of performance.

Also in the summer of 2003, there was an unexpected and most unwelcome bombshell – Lacy was diagnosed with terminal cancer. However he continued to make superb music. There is absolutely no need to use this 'death sentence' to excuse his subsequent work. On the contrary, the later recordings that have been released show him playing at the top of his form. The issues from the latter half of that year, namely his last solo concert, recorded in Zürich (issued as NOVEMBER on Intakt), and his last studio session, recorded in London with the Hans Koller big band (issued as LONDON EAR on 33 Records), have both rightly been very highly acclaimed. Now, here is another fine example of his work, from the following March.

This quintet was initially assembled to perform THE BEAT SUITE in 2001 (on Sunnyside), and studio versions of some of the compositions included in this concert can be heard in that earlier collection. The musicians Lacy chose are all ones he had worked with for some time in other combinations, so they were very relaxed together and they all played superbly on this tour, sounding as though they were really having a ball. The only new tune not on record before is Baghdad, which was written the previous year after the wanton decimation of Iraq by a gang of war criminals who still have not been brought to justice. On the other hand, the oldest composition in the programme is another purely instrumental tune, Blinks, which dates back to 1977.

For this concert, Lacy did two atypical things: he arranged to have the proceedings recorded professionally, and he recited the poems before each piece as well as making some substantial announcements. The occasion sounds very joyous, with all the musicians in good spirits and on top form. The following week, Lacy returned to the Iridium to play what turned out to be his last public engagement – this time in his group called Monksiland with Avenel, Betsch, Dave Douglas and Roswell Rudd. Unbelievably, three months later the leader was to be heard no more.

At the start of his recording career some 50 years earlier, Lacy played jazz in tempo, strictly on the changes. By the mid-1960s, after several encounters with free jazz pioneers, he eventually immersed himself exclusively in free improvisation 'for a minute. (as he would say). The later 1960s found him starting to create an enormous collection of compositions, some of which involved a return to playing on the changes and/or in tempo. The music on this last tour, which finds the band both in tempo and on changes, could thus seem to be a return to certain aspects of his beginnings.

However there are differences, such as the use of some of the freer phrasing that he had absorbed and/or invented on his adventurous journey – none of his findings were completely forgotten. Another distinction from most jazz is his setting to music of a wide range of poetry from various parts of the world (rather than use the Great American Song Book or the blues), sung by a singer much more influenced by European musics than by jazz. The beat poets whose work is heard here were strongly turned on by jazz, but Lacy’s settings are a rare example of jazz being influenced by them.

Lacy made a lot of records after the mid 1970s, and yet many of his compositions remain unrecorded – some are even unperformed. This previously unissued recording is a reminder that with the death of Steve Lacy the world lost a great musician, superlative both as a performer and as a composer. But, while the musician has gone, we still have the music, and his musical genius remains alive in it. This effervescent concert must surely be considered to be one of Lacy’s high points. Listen and enjoy it.

As well as dedicating this release to the memory of Steve Lacy, it is also dedicated to the memory to two of his staunch collaborators and/or supporters – Jean-Jacques Avenel and Gilles Laheurte – both of whom died in 2014.

"As it says on the sleeve, file under jazz with poetry. This final burst of live work from the soprano saxophone legend does indeed bring the two forms together as the leader sets music to various works by iconic beat poets, from Bob Kaufman to Burroughs via Robert Creeley and Ann Waldman with Andrew Schelling. In each case, especially on Kaufman's quite scintillating As Usual, Lacy and accompanists have managed to turn the text into a seductively off-kilter melodic-rhythmic vehicle, often with some of the bracingly bluesy whimsy of a Rahsaan Roland Kirk anangement. The group, comprising musicians with whom the leader had lengthy associations during his prolific career, is devilishly cohesive and the super sharp drums and bass interplay of Betsch and Avenel is a joy. Having said that, Lewis’ improvisations are a reminder not just of his ability to map solos with a compelling sense of direction but also the beauty of his tone, which billows into life without succumbing to histrionics. As for Lacy, he is customarily inventive, again as much with timbre as structure. Together the two men, alternating little and large sounds, make for a great wind section that is potently augmented by Aebi's stirring vocal. Lacy would die soon after but this fine session is a totally life-enhancing swansong."