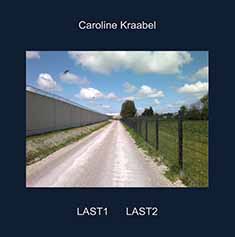 In order to survive we sometimes have to move away, move towards. We change; the place we arrive changes; so does the place we left. We are all migrants or the descendants of migrants.

All we had was a recorded voice.

For LAST1, none of the instrumentalists had ever heard the voice recording at all until the actual live performance. What they play is composed/conducted (by Caroline Kraabel), but disrupted by the occasional interventions of the cassette tape.

For LAST2, the four musicians were very familiar with the voice recording. This version is mostly improvised within the structure provided by the pre-recorded sections, some suggestions, and the choices of who plays when.

Both of these pieces were performed and recorded at London’s Cafe Oto, raising money to support refugees in Calais and Dunkerque. The song was written some time ago, specifically to be used as part of such larger performances, and for Robert Wyatt’s voice.

"There are few sounds as bittersweet as Robert Wyatt's singing voice - and it's his fragile, tremulous falsetto that sits at the heart of these two performances, both recorded live at Cafe OTO. In the first, 16 of London's finest improvisers react in real time to a recording of Wyatt singing Kraabel's simple song of memory and regret as they hear it for the first time. There's a big, almost orchestral feel to the swirling barrage of the large-group improvisation, guided by Kraabel's conduction from kaleidoscopic turbulence - with spiralling piano and stridulating strings - to something more closely resembling 1960s free-jazz, propelled by Mark Sanders' crisp snare rolls and clattering toms. Dropped, lonely and alone, in sudden interstices of silence, Wyatt has never sounded more vulnerable.

The second performance is by a quartet of sax, percussion, bass and additional vocals from Maggie Nicols. Here, the musicians have previously heard and fully digested Wyatt's pre-recorded part and this, compounded by the stripped down instrumentation, conjures a much sparser and focused piece, with Nicols' ghostly moans and operatic wails setting the mood for Kraabel's glacial, glancing sax. It sounds like Wyatt is trapped in a glass box being haunted by nostalgic phantoms for the rest of eternity.