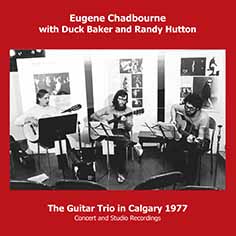 THE GUITAR TRIO in CALGARY 1977

All analogue recordings made in Calgary
by Wade McGregor - 1977 February 27
Total time 73:00

In the late summer of 1975, I was visiting my friend John Norris, then editor of Coda Magazine, in Toronto, and happened to arrive the same day as a concert at A Space that John thought I would like. The featured artist was the young, Calgary-based guitarist, Eugene Chadbourne, who was also writing reviews for Coda (as well as other journals, notably the Calgary Herald). So I went along and introduced myself and the next day we met up and played together. And so began a musical relationship that continued on a semi-regular basis for the next several years, both in Calgary and then in New York after Eugene moved there and connected with John Zorn.

At that point I was doing a fair amount of touring as a solo artist, playing in the clubs, coffeehouses, bars, restaurants, and occasional concert venues that were booking folk/acoustic acts. For a while Eugene’s apartment in Calgary was a regular stop on my cross-continental trips, and the first time I visited, in the summer of 1976, he introduced me to another guitarist who was involved with free music, Randy Hutton. Coincidentally, Randy was also a writer (also for the Calgary Herald, mostly).

This was exciting for me because, while I knew lots of acoustic guitarists who played folk, bluegrass, blues, ragtime, and swing jazz, I had not at that time met anyone else who was trying to base their guitar styles on Sonny Sharrock or Derek Bailey, or on what other free instrumentalists were doing. And though Eugene was actually younger than Randy and I, he already had a couple of self-produced solo LPs, and he was always a go-getter. He was fearless and positive about finding and organizing gigs, and networking with like-minded young musicians all over North America.

So Eugene organized a couple of concerts and a recording date for a guitar trio that included Randy and me, in late February of 1977. We played a gig that Eugene had magically come up with in Lethbridge, Alberta, and then at the Parachute Center in Calgary. Immediately after the Parachute show we went into the studio where Eugene’s friend Wade McGregor worked. I think this was how Eugene and Randy made a lot of their recordings in those days but it’s the only time I have ever recorded after a gig in the middle of the night, something that was common practice for many of the big bands during the swing era.

The only thing that was released at the time was Eugene’s Two Peafowls (as one side of his GUITAR TRIOS LP on Parachute (P-003)), but we also recorded two duos by Eugene and me, and a couple of my solos. I was given studio dubs of this other material, which was finally released by Emanem in 2016 as part of my collection OUTSIDE (5041). I also somehow wound up with a reel of tape that contained the live recording of the guitar trio at the Parachute Center, and managed not to lose it despite moving about 20 times over the next 40 years, until Joe Lizzi digitised it in early 2018. I had by then little memory of what the music sounded like, and no idea about the sound quality, but I was favourably impressed on both counts when I did hear it, and asked Martin Davidson if he would like to release it.

When in 1977, Eugene moved to New York, where he threw himself into the scene, and got involved with John Zorn. This association produced several further records on Parachute and other labels before Eugene moved away from the city a few years later. But I think many people don’t have a clear picture of how surefooted a musician and composer Chadbourne was before he moved to New York. He was barely 23 at the time of this recording and was usually the youngest cat in the room or on the stage for all the projects he was involved in.

He also played a significant part in bringing together people from all over the continent; it was Eugene who spread the word about John Zorn when no one had heard of him, and connected him with musicians like Henry Kaiser, Bruce Ackley, Davey Williams, LaDonna Smith, and Duck Baker. Eugene’s ideas about composition were advanced and well formed in those early days. I remember him saying that the reason he wanted to work with charts and structures (a new idea to me for this music at that point) was to avoid the tendency of improvisers to find one way of playing together and keep falling back towards that; giving guidelines can actually help to open things up. The music here, especially on his originals, bears this out.

Randy Hutton also moved to NYC, a couple of years after Eugene, and has been there ever since. Randy had never been a full-time musician, and performed less and less as the years went by, though he did make an interesting duo record with drummer Peter Moller before leaving Calgary (RINGSIDE MAISIE, Onari Records 005). As one can hear on this record, Randy’s instrumental voice was strong and clear and he gave no quarter to the two musical extroverts on stage with him.

There was one later performance by the Guitar Trio, at Zorn’s Theatre of Musical Optics in New York in July, 1978 (this was also recorded, and Eugene issued one track on an unnumbered House of Chadula collection called VISION EASE TOO). Chadbourne and I have hooked up a few times over the years for the occasional duo or bash with other musicians, but I think that the trio with Randy had something special going for it, and I’m happy that this music is seeing the light of day. It gives a fuller picture of what Eugene was doing during this early period, and adds considerably to Randy Hutton’s recorded legacy.

Of the 7 live tracks included here, 4 are trio performances, 2 are solos, and there is one duo by Eugene and me. It’s likely that other material was performed that either wasn’t recorded or was on another reel of tape that has been lost. The trio pieces include one composition by Randy, two by Eugene, and a cubist medley of tunes recorded by Ornette Coleman (Lonely Woman, \Comme Il Faut, and Charlie Haden’s Song For Che). The live version of Two Peafowls is much shorter than the one we recorded later in the studio, and So Long, Mom had to be edited down, because in performance the last few minutes involved all three musicians getting up and moving around the stage, with some of us going hopelessly off-mic.

The photo was taken immediately before the concert. It shows from left to right: Baker, Hutton and Chadbourne. The stereo separation on both the concert and studio recordings is the same as on the photo. Baker played a nylon-strung flamenco guitar, which is generally quieter than the other two steel-strung guitars.

The seven concert tracks are presented in the order of performance, except that Cards was played after White with Foam.

The original tape for the previously issued track could not be found, so this item had to be transferred from vinyl (by Joe Lizzi), then be cleaned up (by me). Since vinyl is bizarrely fashionable these days, I was thinking of leaving all the vinyl artefacts intact. Another possible idea was to include a coupon to download a box of Rice Krispies to be eaten whilst listening.