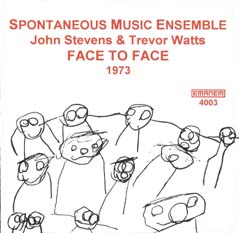 FACE TO FACE - A PIECE FOR TWO PEOPLE

Face to face means exactly that. When Trevor and I perform it, we are seated to enable the drums and the saxophone to be approximately on the same level. We face each other and play at each other, allowing the music to take place somewhere in the middle. This is very much an outward process. We are trying to be a total ear to the other player, allowing our own playing to be of secondary importance, apart from something that enables the other player to follow the same process - the main priority being to hear the other player totally. Both players are working at this simultaneously. At this stage we are not aware of the total sound of the two players. When we arrive at hearing the other player completely and playing (almost subconsciously) for his sake at the same time, we then allow ourselves to bring into focus the duo sound. Up to this point we've let our own personal playing function in an unconscious way. From then on we start to converse naturally, retaining the group awareness we've developed between us. Free group improvisation is our aim, and a preparation piece like this is to aid us to achieve the concentration required for the best results. The actual process, loosely described in these notes, may only take a few seconds, but those few seconds are significant in getting us beyond ourselves and into the music. Trevor and I have been the best of friends since 1959, and would like to feel that this, our first duo record, is a good example of that friendship.

John Stevens (1940-1994) and Trevor Watts (b. 1939) first met in 1959 when they (and Paul Rutherford) were in the Royal Air Force. They re-met in 1965, when Stevens became the drummer in the quintet co-led by Watts and Rutherford. With the opening of the Little Theatre Club at the beginning of 1966, that group became the Spontaneous Music Ensemble (SME). The personnel evolved over the next year. Early in 1967 Stevens became the sole leader, and the other members were Watts, Rutherford, Kenny Wheeler, Evan Parker, Derek Bailey and Barry Guy. By the middle of that year, with a change of musical direction to the beginning of what is generally considered SME music, the group had reduced to the duo of Stevens and Parker, with other musicians added on an ad hoc basis. Watts, meanwhile, formed the first version of Amalgam with Guy and others.

In the Spring of 1968, Parker left the SME, and Watts rejoined - Stevens and Watts becoming the mainstay of the group until 1976. Once again, various musicians were added on an ad hoc basis, and some joined for extended periods, notably Maggie Nicols, Johnny Dyani, Mongezi Feza, Julie Tippett and Ron Herman. Stevens also joined Amalgam, which coexisted and continued to explore more jazz-related areas during this period.

In 1976, Watts left the SME and Stevens left Amalgam, with the two of them rarely working together thereafter. From 1976 to 1992, the SME was the trio of Stevens, Nigel Coombes and Roger Smith, and at the time of Stevens' untimely death, John Butcher had replaced Coombes. Amalgam continued for some years with Watts, who eventually replaced it with his various groups going under the general name of Moiré Music.

During the latter half of 1973, when the music on this CD was recorded, the SME was just the duo of Stevens and Watts. The two had become extremely close musically, and the music had become very austere - stripped down to the bare essentials. The end result was at times akin to one person playing two instruments, unlike so many duos which sound like two people playing solo simultaneously. This could be called minimalist music, if that term had not been hijacked by the school of ad nauseam mechanical repetition.

The main piece performed during this period was entitled FLOWER. This can, perhaps, best be described as sub-minimal - it certainly makes the music on this disc sound decidedly rococo! After this exercise in hyper-austerity, the duo was ready to make the magnificent music heard herein.

All of the versions of FACE TO FACE recorded are now included on this disc, although numbers 2 and 7 have been edited. (The first two pieces were not included on the original LP due to lack of space. Since they were performed before the piece that came to be titled FACE TO FACE 1, they have been called PREFACE TO FACE.) Although all the pieces start off from the same premise, and bear similar titles, they end up encompassing a considerable range of expression, with each one capable of standing on its own. They were highly influential when they were first released, and are still worthy of further investigation.

"FACE TO FACE is always intriguing, generally satisfying, and often really marvellous music. Trevor Watts and John Stevens have been playing together for years now, and have built up a great rapport; working here without any considerations other than the music they can create together, this long experience pays off in the controlled yet adventurous way this music develops, in a loose yet basically shapely form. It moves fast, as you might expect from two men experienced at reading each other's minds, often revealing a glancing, allusive quality of virtually instantaneous recognition, reaction, and counter-action. And following from all this, its mobility is based on speed of producing and developing ideas, of inventing music rather than simply on technical facility.  The lengths of the pieces vary quite a lot, taking as long as they need to take, and developing generally just from one point to the next rather than on a thematic basis, though this doesn't mean that the various lengths of improvising don't show a good deal of varied character and sustained personality."

"Following on from their Flower period, when the music was seemingly compressed into tiny blips, FACE TO FACE broadens things just a little. The drum sound is now lighter, stripped down and played with outstanding finesse and speed. How this most clipped and abbreviated music manages to avoid any feelings of neurosis, I'll never know, but it does. Watts is a master, a passionate player in any context, but especially so in the sheer light of Stevens' cymbals and tiny drums. I was struck by the vulnerability of this music, especially when Stevens plays cornet - the delicacy of a lover's fingertips, perfectly framed in the Little Theatre Club's great acoustic."

"FACE TO FACE finds John Stevens and Trevor Watts proving that the ever proficient SME could operate just as resplendently in its most diminutive form as it could as a large ensemble. Using a self-developed playing style in which both musicians sat directly in front of each other, Stevens and Watts refined their 'face to face' technique over countless hours of playing. The intended result of this performance custom was free group improvisation where the two players would organically merge into a single musical being. From the sound of their playing on this recording, I'd say the two gentlemen certainly hit their desired mark. Stevens and Watts' stunning telepathic interplay sounds not unlike that of Jarman and Favors or Parker and Lytton. It seems there are moments when the pair's prime objective is to create sound, just sound, in its purest form.

As free improvisation can sometimes lack the 'warmth' of other idioms, it's nice to hear Stevens and Watts sound as if they're playing from their hearts. In addition to hearing Stevens augment his trap work with regular blows on the cornet, FACE TO FACE offers a rare chance to listen to John utter spiritual pronouncements in a blurred, stream-of-consciousness scat. It isn't often that a sax/drum duo hits peaks like those contained on this recording, and if the intervening 24 years of recorded musical history has anything to tell us, it's that we're unlikely to come 'face to face' with this sort of music again."

"The music is stripped from any outside reference and emotional background. It may be austere, but it is not cerebral - no calculations here, only musicians deeply listening to the other's input, understanding each other at a subatomic level. All tracks begin in a similar way: Stevens plays light cymbals, Watts utters quiet staccato notes in the high register - with one exception, Face to Face 5, where Stevens takes out his cornet. From this point on anything can (and does) happen. The last recording, Face to Face 7 remains one of the most brilliant examples of a free improv duet playing in absolute synergy. This album is essential to understand the development of scaled-down free improv in England."

"It is the delicacy of Stevens' percussion that is notable, while Watts' keening cries have an emotional pull that makes nonsense of attempts to re-label this sort of music 'abstract'."

"Though busy, this duo's interaction is intimate, hinging on the delicacy and precision of sudden sounds cut short. Watts darts across the soprano's registral compass, producing low notes that mutate into the wispiest overtones in the twinkling of an eye; Stevens suggests pulse without rigidly stating it, brief repetitions amid the restive, non-rhythmic play of cymbals and crisply-struck snare."

"Though a collective aesthetic was employed in the realisation of SME music, Stevens was the primary force behind the group's direction(s). FACE TO FACE actually provides a penetrating look into a major component of the SME sound. In a manner updating the call-and-response approach so prevalent in blues and jazz, the duo listen, anticipate and react, bouncing fragments of predominantly sharply-etched rhythmic sounds between them, at times maintaining a static even-handed momentum, while elsewhere establishing an austere stance, exploring gently building, climaxing and receding contours. This essentially rarefied, but in no way limited, so-called ping-pong approach, gives way to fluttering/crying variations on Face to Face 1, where Albert Ayler is evoked, and Face to Face 6.

Glancing back, it is curious to note Watts' SME style. The 'abstract' flutter-tonguing and squealing he employs here clearly have more in common with the raw materials of Evan Parker's style than the rich, plaintive lyricism Watts has come to embody. Still, his playing here is impressive, and underscores the indelible mark the SME has made on creative improvised music."

"The 'score' is boiled down to a few scant directions: two players face each other and each follows the other's lines as closely as possible. Oddly enough independent playing to maintain continuity is suggested. It's an exercise in minimalism or 'negative capability' or selflessness or rhetoric erasure, the purest and most intense form of the collective improvised moment imaginable. In this mode of pure response, the two players disappear into the intermediate zone between them. Rather than being ignored in this, the listener may be constructed along with the music in that heightened space. This is music of the highest discipline, undoubtedly of value, whether you (or I) want to listen to it or not."

"The result is an explosion of simple but effective improvisation between two players who are completely in tune with each other. This is a must for anybody who is interested in the history and development of the British progressive scene."