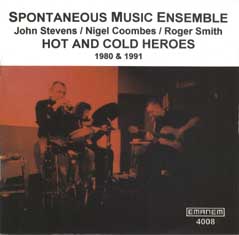 Some people consider this version of the Spontaneous Music Ensemble (SME) (1966-1994) to be their favourite, while some consider it to be their least favourite. Other people (like myself) consider it to be the equal of the other SMEs, and/or are not interested in such absurdities as league tables and popularity charts. Certainly, this was the version of the SME that existed for the longest time - from 1976 to 1992 - although there were often long gaps between performances.

This was the only non-ephemeral SME not to include a saxophonist, which must have been particularly disturbing for those who still considered it to be a jazz group, since the number of musicians to use the violin successfully in jazz can be counted on the fingers of an obscene gesture. It must also have been rather shocking, in this age of over-amplification, to have a group featuring two string instruments played unamplified.

Compared with this trio, the earlier SMEs featuring Evan Parker and Trevor Watts appear to be much more disciplined affairs - not that everything was allowed in this trio, as anyone who witnessed Stevens' lectures (often mid-performance) to his fellow ensemblists will attest. Each of the three musicians seemed to be able and willing to be outrageous, but also to be capable of doing so in a fully musical fashion. Although at times they appear to go off on their own, they always remain a group - the SME ethos being taken to extremes, perhaps.

John Stevens (1940-1994) was a co-founder of the SME in 1966 and took over the leadership the following year, when he also put together a kit of small percussion (his "SME kit") that was not too loud to drown out other acoustic instruments. This kit evolved over the years, but was the main instrument he used with the SME.

In the early 1970s, Stevens began to direct workshops which attracted several musicians who subsequently became experienced improvisers themselves (plus several who soon vanished from sight). All of these musicians were incorporated into the Spontaneous Music Orchestra which improvised on concepts by Stevens, and some of the more talented were incorporated into an extended SME called Free Space. Two such musicians were Nigel Coombes (b. 1952) and Roger Smith (b. 1948).

As this record (and others) will attest, both Coombes and Smith are extraordinary musicians, worthy of far higher reputations than they have. Unfortunately, both are not at their most comfortable when appearing in public, and neither is exactly a hustler.

In spite of existing for so long, this trio has not been generously documented. It therefore seemed important to release more material to preserve the memory of this fine group, and help retrieve its reputation from semi-oblivion.

Paul Wilson found the first piece amongst Stevens' accumulation of tapes. The only information written on the box was "BOILEAU ROAD" - the name of the street where the Stevens family lived after 1975. This would appear to have been recorded in their dining room early in 1980. The performance, which is presented here unedited, is a superb example of this trio's art, and if anything can be said to be a typical performance this is it.

The remainder of the music was recorded late in 1991. THAT'S IT, is the stand out. Stevens set this piece going by whispering to the other two that they should start playing harmonics. This gives the music its direction for the first half. However the second half is delectably unpredictable, with several false endings and a forced ending. LATE NIGHT EXTRA is a lively extract from a piece performed at the very end of the evening.

Some three weeks later, on the other side of London, the trio played three short pieces (not heard here) followed by the duo of Neil Metcalfe and John Rangecroft, both of whom have been associated with the SME at various times. All five musicians then collaborated in a final piece (as had happened on previous occasions), and most of the result is included here as FIVE TO ONE. Actually, this piece began rather tentatively, so the first four minutes have been dropped. However, the final fourteen minutes are superb, exciting and unpredictable, with an amazing solo coda that just happened.

The final ONE FOR TERRY DAY comes from an all day concert at the Red Rose - a benefit for ailing percussionist Day.

"HOT & COLD HEROES is probably the best record of this particular SME line-up. Like all very good musics, it involves the reviewer in making statements that immediately need qualifying or even contradicting. Contradictions never failed to inform and stimulate this trio into playing great music throughout their sixteen years.

Contradiction number one: Stevens was one of the most noticeable people in the world of improvised music, but he made the SME into a group that eschewed rhetoric, playing at low volume levels and expressing extreme emotional states in a musical language inspired by Webern and Noh music. For me it was a fantastically important group.

Contradiction number two: these are very funny guys, but the playing was about life and death. Twelve minutes into Boileau Road the music takes on an intensity that is simultaneously hilarious and incredibly moving. Number three: passion always combined with almost obsessive rhythmic accuracy.

I love That's It for the extremely stubborn circular-breathing style fiddle with trumpet key-clicking and subtextual guitar. Coombes is extraordinary here - his responses are all utterly personal and perfectly right. The SME was a bewitching combination of confrontation and co-operation."

"When a group of musicians plays together long enough to create their own ensemble-specific musical idiom, you know you're in for one hell of a treat when listening to the dialogue of their ongoing, collective conversations. The SME heard on HOT AND COLD HEROES played together somewhat irregularly from 1976 to 1992, during which time they constructed for themselves a tremendously beautiful and complex musical dialect that is distinct enough from the de rigueur improv vernacular to almost qualify as its own language. The trio have the uncanny and much-welcomed ability to wax microtonally one minute and rattle the shutters the next. It's often surprising just how much sound these three can generate when seized by the rapture; especially considering the unamplified nature of Coombes' violin and Smith's guitar.

Boileau Road and That's it reveal Stevens and Coombes as two commensurate lynchpins alternately exploring and advancing the trio from one evanescent theme to next. Smith tends to fill-in the 'open spaces' with abstract melodies and various glissandi while adding colour to the meta-structures built by the other two. All five improvisations on this release feature amazing interplay among the musicians in attendance, and it should go down on record (for those uninitiated) that the late John Stevens was as much a master of the pocket cornet as he was of the kit drums. HOT AND COLD HEROES closes with One for Terry Day, a vari-sonic barrage of shrieks, squeals, drones and drum beats that propels itself forward like a tunnel-borer through a sand mound. Seeing as how fewer and fewer of England's original free players are making it to the curtain call these days, we should be thankful that someone is providing us with a chance to listen to 'the sound that was' - and in the case of HOT AND COLD HEROES, we are indeed fortunate enough to hear 'the sound that is'."

"Although I love the sounds of things used and abused and, by necessity, plugged into the mains, there are times during my technirvana when I crave the respite of some earthy acoustic noise. And with this particular line-up of John Stevens' Spontaneous Music Ensemble I get it. With guitarist Roger Smith and violinist Nigel Coombes on board, the SME developed a cracked, pungent character, rather like freshly-crushed peppercorns. Coombes either traced glistening, spidery phrases or cracked hillbilly hoe-down, while Smith's guitar sounds were so closely clipped - almost brittle - you'd think he was playing ukulele. Stevens on his small kit developed a richly expressive percussive Esperanto from what might have otherwise have passed for the sound of someone rattling around in an understairs broom cupboard. This is another great dip into the archives from Martin Davidson's reactivated Emanem label."

"The opening piece, Boileau Road, recorded in 1980 and lasting nearly half an hour, is one of the finest examples of free improvisation. Coombes, in particular, dazzles with his avant-garde lyricism, making this track more accessible than most SME recordings."

"What really strikes me about this recording is how minimalist it is. These guys really test the boundaries between random playing and conscious intent and make you realise that any human attempt at random play will be unsuccessful because of the cultural sensitivities that inevitably creep in affecting the outcome. When the Spontaneous Music Ensemble plays, what you hear is raw musical inspiration. What I really like most about the SME compared to other free form outfits I've heard is that they actually have a strong sense of aesthetics and a sense of humour as well."