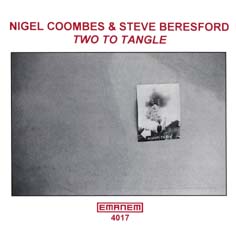 All digital recordings made in London in 1997
3,4: Concert recordings by VERYAN WESTON at the Red Rose FEBRUARY 16
1,2,5: Studio recordings by STEVE LOWE at Gateway MARCH 8
Total time 75:11

Their first (furious) duo record - WHITE STRING'S ATTACHED (Bead LP 16) recorded in 1979 - was generally considered, by a handful of serious music lovers, to be the most significant advance in violin and piano music for around 200 years. So a sequel to document the further substantial developments that have taken place is obviously overdue, and here it is, showing how much they have grown both as individuals and as a duo.

The reactivation of this duo actually came about somewhat tangentially, for when Nigel Coombes left the Spontaneous Music Ensemble in 1992 he also completely left the improvising music world. The release last year of HOT AND COLD HEROES (Emanem CD <>4008), featuring the Spontaneous Music Ensemble of 1980 & 1991 vintage, prompted several people (such as Steve Beresford and myself) to try and persuade him to return, and this CD documents the successful outcome.

The duo started appearing again in 1996, that being the first time Coombes had improvised in public for about four years, apart from a brief appearance at a crowded John Stevens memorial concert early in 1995. However, there is no sign of any rustiness, so there is no way of observing any prior absence, which makes this paragraph and the previous one totally irrelevant. In fact, the two protagonists just seem to fit in together where they had left off, making music that is both deeply profound and superficially enjoyable, among other things - music that definitely deserves much close relistening.

We hear three of four excellent pieces recorded one Saturday lunchtime in a studio - the third piece being replaced by the whole of their fine performance at a Sunday evening concert a few weeks earlier. All five pieces are presented complete as performed to give true illustrations of the remarkable changes that this duo typically goes through. Other than that, the music speaks for itself, showing how far the world has moved on since the explorations of Joseph Haydn.

"It's been so many years since their first pairing (the WHITE STRING'S ATTACHED LP on the Bead label in 1979) that this certainly qualifies as 'long-awaited' for those who know and care. TWO TO TANGLE, like its predecessor, presents a form of classical music stained/enriched by techniques of improvisation, and also by overtly humorous devices. This is music rich in parodic spirit, deflating classicism's pomp and pretence, mocking its drippy unearned emotion, and satirising its fake 'chamber' moodiness. And although the two seem to have set out with the purpose of deliberately and perversely pursuing an antipathetical - and occasionally downright hostile - form of interplay, they nonetheless have created, thorough sparkling wit and sheer pyrotechnical skill, a fairly breathtaking duo improv recording. There are so many Emanem titles so heavily soaked in historical significance and major name status that TWO TO TANGLE could be in danger of slipping through the cracks -a potential travesty, as it is a gem, and I applaud Martin Davidson for bringing it to the people."

"Refreshing, beautiful music-making. Coombes is absolutely in tune with Beresford, who supplies the lyrical underpinnings. They listen like hawks, and accompany one another like twins. Exhibiting a slowly widening dynamic range with microscopic influences creeping in from other musics. Both joyous and plaintive, adventurous and sedate, and, with a sense of fun. Beresford also plays a little trumpet, prepared piano, and generally dances all over the keyboard. Contender for CD of the year."

"Coombes and Beresford combine to generate a programme of improvised music with a definite classical tinge. The pieces typically start with stark statements on violin and piano which build to more fluid pronouncements and eventually to a sustained intensity. Thereafter, the quiet returns as the pieces wind down. There is a serene feeling about the assemblage of these two instruments and players. While they are capable of and do evoke violent feelings, their overall effect is more subtle, more calming.

Coombes is able to make challenging and serious statements on his violin. While the bow is predominant, he also uses a plucking technique and a percussive finger drumming to vary the sound patterns. Beresford also uses percussive techniques, not only on the keyboard, but on [the piano lid]. At one point during Steamed, he introduces some short blasts on a small trumpet that fit amazingly well with the piece's context. His playing is inspired, provocative, and original. Together with Coombes, he provides the attentive listener with a serious approach to improvised music. While it is demanding and requiring of strict attention, it is worth the effort."

"Five remarkable duos between violinist Nigel Coombes and versatile instrumentalist Steve Beresford comprise this well-conceived recording. Lovingly produced, and including drawings by Coombes and informative liner notes by Martin Davidson, this CD features instant composition at its best. The talented Beresford plays an attractive free-style piano on each number and adds trumpet on one. This invigorating, life-affirming music draws on a host of influences, but modern classical and avant-garde jazz come to the forefront. Both Coombes and Beresford cover an astonishing array of ground. At one moment they can sound tranquil and at the next powerful and majestic. The two often sail in uncharted waters and manage to stay afloat."

"The music here is more closely related to classical than jazz. Classical-derived free improv? Why not? The violin/piano duet is a long-standing format, dating back to Haydn. Beresford suffered a classical training and throughout the five 15 minute pieces, he constantly shifts from more typical free improv passages to rhythmically and harmonically-structured snippets, often mocking concert pianists and doing subtle pastiches of Haydn, Mozart, Beethoven, Schubert, even Ives. Coombes' both plaintive and lyrical tone, and his use of approximate accuracy give his playing a street-player flavour. He follows Beresford's lead, sawing through his classical recollections, often sounding like a concert hall version of Malcolm Goldstein. If anything, TWO TO TANGLE is highly entertaining, from the spot-the-pastiche game down to the pianist¹s sudden interruption on pocket trumpet in Steamed. The unusual blend of influences gives this duo¹s music a surprisingly fresh flavour. Strongly recommended.v

"Perhaps significance is not the aim: it is an attempt to take on music's past, invoking bygone styles and be means of subtly subversive variations, consigning them to the dustbin of history. Bartok comes in for a fairly brutal summarising at one point and on Bins there is a vivid depiction of something from Harry Partch's cutting-room floor. Sometimes the music quietens down a bit, as if the musicians are trying to clear a space amid the debris of music history. Mainly, though, what you get is a series of duets for hammer and tongs.

At a time when so much composed music is either pointlessly cluttered (the new complexity) or insultingly vacuous (minimalism), here are two people who can 'make it up as they go along' with such inventiveness, and such intensity, as to illustrate what John Cage said in another context: 'We need not fear for the future of music'."