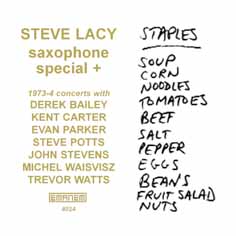 All compositions by Steve Lacy

In 1973, several musicians were invited to perform at concerts celebrating an exhibition of Val Wilmer's photographs at the Victoria and Albert Museum in London. Steve Lacy was one of those invited, and he decided to bring just Steve Potts and Kent Carter, and team up with Derek Bailey and John Stevens, with whom he had worked at the 1970 Baden Baden meeting. Madelaine Davidson and I decided to organise another concert a couple of days later at the everlasting 100 Club, and record it.

Potts worked in most of Lacy's groups from 1971 to 1995, and was an important factor in their sound. Apart from being a lively soloist, his essential role in the theme statements is amplified by the following remarks that Lacy made when I interviewed him in 1974: 'Almost everything I've written for quite a few years now is in seconds. It's like one line, but it's thickened by another line quite adjacent to it. There are two kinds of seconds, major and minor, and they both fall into what's known as dissonant category, which is a useless category. Actually, to me they ring like bells if they're in the right order, if they're placed right and if they're pitched right. It's a way of speaking with a forked tongue, if you like.' Or it's a way of making the tunes sound right!

Carter worked with Lacy in the mid 1960s and throughout the 1970s. This was his first visit to London, and his first meeting with either Bailey or Stevens. Out of this came several musical encounters over the years, mainly with Stevens.

From 1972 to 1975, Bailey was primarily using stereo amplification, with two speakers controlled by two volume pedals. Unfortunately, this stereo spread cannot be heard in this mono recording. Around 1967, Stevens built a quiet percussion kit, that brought his volume down to that of the other acoustic instruments in his Spontaneous Music Ensemble. For his gigs with Lacy, he used the latest version of that kit with additions from his full size jazz kit.

Strange as it may now seem, there were few records of Lacy available then, so it seemed important to get a record of this quintet out, even though the recording was not brilliant (being one of my first), and the music was variable. It now seems appropriate to reissue just the three best performances.

For the original LP release, Lacy wrote the following: '38 is a self-portrait dedicated to, and in the manner of, Coleman Hawkins, who taught me something about ageing. FLAKES features Derek and is an ice-skating piece written for Mark Rothko. REVOLUTIONARY SUICIDE is to and from Huey Newton (see his book).' This is the only published recording of 38.

On that visit, Lacy brought with him tapes of his sensational first solo concert, with the hope of finding someone who would be interested in issuing them. That resulted in the first Emanem LP (now reissued on AVIGNON AND AFTER - 1 Emanem 5023). He also gave me a copy of the excellent over-dubbed solo LP LAPIS (now available on SCRATCHING THE SEVENTIES / DREAMS Saravah SHL 2082). This gave me the idea, early in 1974, to suggest to him that it would be interesting to hear similar music involving other distinctive soprano saxophonists. Between us we came up with Evan Parker, Steve Potts and Trevor Watts. In addition, Lacy suggested what he called a "noise section" of Derek Bailey and Michel Waisvisz. This was my introduction to Waisvisz, with whom Lacy had recorded the fine ICP album LUMPS a few months before this concert. He played a synthesizer without a keyboard, using many mysterious hand movements.

It was not possible to schedule the concert until the end of the year owing to conflicting commitments. Even then, Lacy, Potts and Waisvisz were unable to get to London from Paris and Amsterdam until the previous day. To further diminish the time scale, Bailey and Parker (along with Paul Lytton) were offered an extended gig in Freiburg that could have gone on beyond the date of the concert. They decided to take it until the previous night, then get a taxi to Basel, and hence fly back to London on the morning of the concert, leaving Lytton to drive back with all the heavy equipment in his van.

All in all, rehearsals could not commence until around noon on the day of the concert. Lacy had previously sent some of his compositions to Parker and Watts who had diligently rehearsed them, but he subsequently decided not to use those pieces. Instead he wrote three pieces especially for the concert, and also chose to use DREAMS. The running order was to be STAPLES, DREAMS, SWISHES and SNAPS, with a total improvisation featuring four soprano saxophones between the last two pieces. This sequence was to be repeated in both halves of the concert with only the resulting improvisations being different. However, in spite of the same format, the two halves turned out to be very different.

The end result was some remarkable music, marred from time to time by inaccurate theme statements and incompatible improvisations caused by the brevity of rehearsal time. No rules were given for the improvisational sections - it was left entirely to the musicians' sensibilities. From the three recorded versions of the sequence - rehearsal, first set and second set - Lacy chose the best complete versions of each piece to make up a 'perfect' set that was released as an LP.

The chosen version of STAPLES comes from the second set. The piece was preceded by a semi-ritual tune-up on each occasion.

A dreamy introduction brings in DREAMS taken from the first set. During all three versions of this, Lacy played two gramophone records (that I happened to be borrowing from the local public library) - dreams of a steam train and a symphony orchestra.

The theme statement of SWISHES was not played cleanly in either half of the concert, so the chosen version is the rehearsal. Evan Parker makes his only public appearance or recording on baritone saxophone. This is the only published recording of this piece.

In the rehearsal and first set, the free improvisation featured all six musicians. In the second set, heard here, it was just performed by the four soprano saxophonists, and hence earned the title SOPS. Is this the earliest recording of a free improvisation by a saxophone quartet?

Both of the concert versions of SNAPS were played cleanly, so it was a difficult choice as to which one to include on the LP. The CD format allows us to include both of them, with their very different improvisational sequences. In particular note Lacy’s excellent solo half way through the previously unissued version from the first set. These are the only published recordings of SNAPS.

This was one of the strangest concerts I have been to, let alone organised. But for all its strangeness, it certainly resulted in some very fine and unique music.

"Lacy's SAXOPHONE SPECIAL + augments the named LP with three tracks from THE CRUST recorded a year-and-a-half earlier. Sound on the earlier record is mono, documentary in feel, but the music is extraordinary, Lacy's bright tunes serving as a fixed ground against which Bailey improvises brilliantly (hear especially Flakes).

SAXOPHONE SPECIAL is a unique and fascinating record. Contemporaneous with Braxton's sax quartet on NEW YORK, FALL 1974 and predating the ensuing wave of sax foursomes, its deeply exploratory sound is clearly the germ for ROVA. Lacy, Potts, Parker and Watts convene on a sopranos-only free improvisation titled Sops, while the other tracks sport Lacy's multidimensional charts, icy, percussive guitar superimpositions and Waisvisz's parabolic electronic intrusions. At once an oddball item and a true classic."

"This welcome reissue fills a gap in Steve Lacy's recorded career from the days when he was exploring free music. These tracks, from two live dates in 1973 and 1974, capture Lacy's music at an arch, shambolic, querulous, clangourous point from which he slowly, steadily retreated. For evidence just compare the flame-throwing versions of Flakes here and on 1987's THE WINDOW, or, to throw the difference into even sharper relief, this take of Revolutionary Suicide with the one on 1995's ACTUALITY. Nevertheless, what this disc lacks in gloss and precision it more than makes up for in candour and authenticity. No Lacy fan will want to miss it.

The real treat of this disc is the saxophone quartet assembled on December 19, 1974 to record the last six tracks. Staples especially is full of circus whistles and other froufrou. But the real action is between the saxophonists, who despite a general lack of rehearsal are able to tackle Lacy's material with spiritedness and vigour.

The voices aren't really hard to separate, since each is so distinctive by this time in their careers. There is relatively little flat-out 'now I can kill you' free screaming for the period of the recording (although there is a bit on Dreams and other tracks), and the quieter sections offer from close listening and careful counterpoint by the saxophonists, especially Parker.

This is an important historical document and is, although uneven, full of musical rewards."

"This period of Lacy's music found the saxophonist in pursuit of fresh sources to augment what was fast becoming an intensely personal compositional approach. The initial concert pairs Lacy with his soon-to-be-long-term alter-ego and foil, Steve Potts, in front of the poised and evasive foundation of Bailey, Carter and Stevens. The skeletal structures for Lacy's regular group are in place, as the leader and Potts play tightly knit, see-sawing and herky-jerky melodies in close tandem before weaving into spirited, and often complimentary, outbreaks. Where Lacy is generally dry and concentrated in his quest to squeeze everything he can out of a line (often starting with a simple phrase and reworking and realigning it until it satisfies), Potts is more discursive and outwardly emotional. Carter and Stevens' work together is a loquacious blend of chatter and palpitation, while Bailey turns in some of his most wonderfully deranged sound sculptures, as clanging and resonating notes push through the wash of tones.

Bailey's role as a sound generator becomes more obvious on the second session, where he and Waisvisz concoct a sweltering backdrop of cacophony behind an even more ambitious project of Lacy's. Rest assured that at no point does this saxophone quartet feel compelled to relegate themselves to traditional roles with one player playing rhythm and so forth, but instead, each player is given the freedom to carry out the line as they see fit. While the melodies lack the refinement of a working group, the raw nature of this music is part of its appeal, as the saxophonists interweave phrases and counterpoints within the intervals, often working across each others' lines into a chaotic, yet structured din. That the other players were enthusiastic about the possibilities of such a line-up is obvious, for all four reed players respond with the utmost intensity and some fiery blowing."

"These are tapes recorded at the 100 Club and the Wigmore Hall. At the time, Lacy was experimenting with saxophone harmonics based on seconds. Potts, who came to Britain with Lacy and Kent Carter, is supremely confident in the idiom. 38, performed at the 100 Club with Bailey and Stevens, is a tribute to Coleman Hawkins, and it is followed by Flakes and Revolutionarry Suicide. The 1974 session makes use of pure noise and found sounds, and from Michel Waisvisz´s crude but expressive synth effects. Essentially, though, it´s a saxophone quartet spread across the stereo picture, but very different from the usual SATBar line-up. When all four players are on soprano, the overtone field is immensely complex, and one wishes to hear this same grouping recorded with more up-to-date technology"