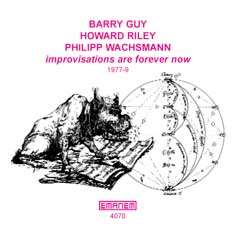 The music on this recording is the result of one afternoon spent in Riverside Studios, where the approach to playing was that of a live concert. After playing together in various combinations, the three musicians decided it would be a stimulating situation to record in as spontaneous a way as possible. (1978)

"In a remarkable run of recordings and reissues of high quality on Emanem, FOREVER NOW stands out as a classic - standing beside the recent quartet album FOUR IN THE AFTERNOON featuring Howard Riley, which you're also well-advised to explore. The music isn't low key at all. It's a quite stunning and incandescent album of British free improv. The final three tracks are previously unissued, and don't differ much in sound quality - which in both cases is fine.

The original album is divided into tracks of roughly five minutes each, tending to alternate active and quiet - Trio Eight is hyperactive and explosive, while the string effects on Trio Three make it what you could call a slow grind. The most jazz-like playing here comes from Howard Riley, whose piano sometimes provides a tonal anchor. Guy and Wachsmann use discreet pedal-controlled amplification and other electronics sparely on some tracks, and sometimes there are string sonorities three ways, with Riley delving into the piano interior. I confess that in the past free improv has been a music which I've admired and respected more than loved; albums like this one have made me see the light."

"It remains an intense listening experience; profound commitment to collective improvising and an earnest form of excitement seep from every particle of sound they generate. Guy and Wachsmann amplify their strings and use electronics; Riley mines the piano with characteristic concentration and articulate cragginess. Even when sparse and quiet, the tension of shared single-mindedness spills from the music. The reissue additionally offers three extremely fine pieces from 1979 that bear the same hallmark of seriousness of purpose enlivened by creative vitality."

"This is a very welcome reissue of an old LP on the Vinyl label, consisting of excellent improvising sessions by three 'pezzi grossi' ('big ones') of my beloved British jazz/improv scene. The double bass in the hands of Guy gives anything you can think springing from a string instrument, being exposed in its whole range and then some; you all should know Howard Riley and his imaginative piano touches, going from calm chordal work to quicksilver dissonant runs; Philipp Wachsmann's violin chirps and sings, giving these sessions a strong flavour of contemporary classic music... just much, much more vital. Open your ears and enjoy another fundamental Emanem release, you won't be disappointed."

"Riley's contributions provide the trio with a rhythmic and harmonic centre of gravity on most of the CD's eleven tracks. He utilises rapid runs and tone clusters somewhat reminiscent of Cecil Taylor, although he is by no means an 'energy' player, and displays only sporadic touches of Taylor's flamboyant physicality.

Wachsmann and Guy scrabble, saw and scrape behind him (or less frequently in a duet format), sounding sometimes like an animated insect convocation, sometimes like alien radio transmissions from distant galaxies, and other times like rats gnawing at wainscoting. Pizzicato playing, rapid glissandos and all manner of extended techniques are the preferred mode for the strings, but vaguely lyrical legato passages emerge at times, as the collective spirit dictates. With Guy playing all over the bass, and also applying realtime electronic treatments (as does Wachsmann), it's sometimes difficult to distinguish bass from violin. Riley blurs distinctions even further by sometimes probing his instrument's innards, producing a variety of small, supportive sounds on the piano strings.

In spite of the generally jagged, hard-edged nature of the proceedings, it's obvious at all times that the three participants are highly attuned to one another, and group dynamics are managed skillfully, with eerie, almost meditative sections evolving into careening cat and mouse chases, and twitchy sonic outbursts.

Music of this sort never has much surface appeal, but the best of it can eventually draws the receptive listener in, inviting an appreciation of tones and textures and the ebb and flow of spontaneous creation. The superficial impression might be that of a series of impenetrable academic exercises, but closer listening reveals a sense of drama, an interior logic and the emotional resonance of three people who are thoroughly enjoying their collective musical journey."

"The result is excellent, sometimes with a lot of cohesion and sometimes chaotic but with the musicians always in control of the spontaneous compositions. We can listen that some trios are done in order to create atmospheres like for example Trio Three by using some double bass and violin sustained note while experimenting with the other instruments, and some other trios are more like experimentation with melodic and chaotic lines played by each of the musicians (as an example you should check Trio Four). A must for lovers of spontaneous music. Favourite tracks: Trio One; Trio Four and Trio Ten."

"All of the improvisations (except Trio Ten) are around five minutes long, and this discipline add a notable concision to the music. The trio seems to make its statement quickly, based on the initial direction one of the musicians takes, and the result is a cohesiveness and a strong ensemble voice that is still unique in free music like this. Both Guy and Wachsmann use some amplification to tastefully extend the possibilities of the strings, and they do tend to operate as a string section while Riley's approach to the piano is primarily percussive. This is an exciting recording."

"Whether because of the provenance of the recording, the original studio sound, the string players' use of 'pedal-controlled amplification and other electronics', or just the trio's aesthetic predilections - or, most likely, a combination of all these factors - the music is strikingly dark, grainy, almost crude-sounding; it is strongly weighted towards the lower and middle range. The busiest improvisations are as abrupt and alarming as a mudslide. Quieter tracks are equally challenging: Trio Two and Three, for instance, are as strange and fugitive as intercepted radio broadcasts. If the sound quality makes it harder to hear the performances as musical dialogues (it often sounds as if Wachsmann and Guy have merged into some flailing multi-tentacled creature from outer space), it usefully emphasizes the music's abrasiveness and sheer strangeness.

This reissue supplements the original LP with a further 25 minutes of previously unreleased material recorded thirteen months later. Caught at a further stage in its development, the trio sounds rather differently balanced (even if this is partially an artifact of the clearer sound quality): Guy is less dominant and Riley's emphatic chording fits more easily into the string textures. The 1977 session was a series of five-minute miniatures, but on this occasion there's a chance to hear the group stretch out with a compelling 15-minute improvisation. While this session isn't as intriguingly unsettling as the 1977 date it's perhaps more immediately appealing. Both, however, are well worth checking out for fans of classic British improv."