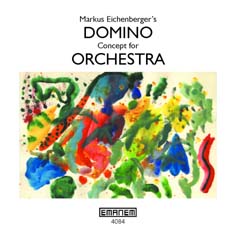 Gérard de Nerval (1808 - 1855), a French poet and translator of the German classics is said to have referred to the game of dominoes as a 'particularly silent and meditative game'.

Markus Eichenberger calls his concept for impulse and control Domino, referring to the improvisation project presented in large format for the first time in 1995 at the Zürich Workshop for Improvised Music (WIM). What began as a work for nine players was developed in 1998 during an outstanding concert at the Schaffhausen Jazz Festival into a work for seven. This appearance resulted in the Swiss cultural foundation Pro Helvetia aiding the development of the orchestra with a project application. A thirteen-strong Swiss and German formation arose from this, and the above production was then taken up in connection with a concert tour.

The principle is as simple as it is effective: impulses and controls come from Eichenberger's changes of his five clarinets, 'stones' or 'markers' offering the members of the orchestra a change of direction each time. The improvisation process, which is always lively, leads to those involved being in a state of alertness which, particularly since it is not about fast tempos, emerges with a minimum of stereotypical patterns and mostly without automated motor functions, and therefore leaves more room for originality.

Eichenberger is convinced that Domino is proof of the fact that there is no 'freely' improvised music, or at least not until the game has begun. The first note is like the first domino, determining each later domino and the direction in which the musical energy flows. Certainly, it must be added, this requires that all involved also function like dominoes to some extent, and are able to adapt themselves to the rules of the game. Once again this not only requires great musical knowledge but also the ability to improvise, and the experience and sensibility which allow the necessary decisions to go on being made: whether to accept or reject, build up or destroy, integrate or break free, act or react.

All of these elements of collective improvisation only work if the psychological aspect is right and no single ego pushes to the forefront, destroying the fragile equilibrium. This is precisely one of the great strengths of Eichenberger's Domino: the almost alchemistic composition of an orchestra which perfects the art of holding back so well that the creative play of thirteen musical personalities and characters can develop optimally note for note within its own logic.

The result is improvised music which is almost composed and seems very structured, but nevertheless displays the decisive features of 'free' collective improvisation.

In the immediate present and in a common format, a never-to-be-repeated work comes into being where active listeners can take part in the creative process. The tension is built up between the risk of boredom or even disaster and the possibility of anarchy which, with its unforeseeable course, wants to create surprising turns or never-before-heard sounds or even unique magical moments. This music expresses a type of intensity between fullness and emptiness, emotionalism, physicality and, not least, eroticism, which at the same time shows the cognitive and sensual presence of the musicians.

A 'particularly silent and meditative game'? The latter certainly - like any good music - but happily not the former.

"It's very much to Eichenberger's credit that this disc is so consistently absorbing. Certain features recall Zorn's work: besides the title, there's also the way in which the 13-piece band rarely sounds that big because only subsections perform at any given time; and also the discreteness of sounds and gestures. Each discrete sound, though, adds to the developing musical fabric rather than rupturing it in the manner of Zorn's jump-cut aesthetic; the pace is kept deliberately moderate, so that there's little sense of chaos or information overload. The result is an hour of improvised music of impressive concentration: it's not minimalist music by any means but there's barely a redundant note or wasted gesture. Strongly recommended, both to fans of large-group improvisation and (especially) to sceptics."

"A thirteen-person collective, Domino are the perfect incarnation of that kind of new free music that you could associate with contemporary chamber ensembles without a problem. A perfect balance among all the instruments involved is the main basis for music that has no definition whatsoever, but at the same moment it's so delineated and self regulating that everything seems composed instead of improvised. There are lots of parts in which the music sounds restrained and willing to get out of a hole; the beauty of Eichenberger's orchestra is right there, when sounds are willing to manifest themselves but the musicians force them to follow a path made of silent promises and menacing vibrations under your feet. High quality everywhere, with special mention to the strings, always extremely brilliant and intelligently creative from the beginning to the end."

"The concept Markus Eichenberger has created is based on simplicity. He signals changes in moods by changing between his five clarinets, markers offering a number of new possibilities each time. This results in a much friendlier and free-flowing music than John Zorn's game-pieces (which tend to be so complex and eventful rules-wise that musicians focus on 'keeping up' instead of their and the others' playing) or the egocentric, ensemble-denying conductions of 'Butch' Morris. Therefore the success of the music rests on the talent of the improvisers - talent to play and to listen. The absence of electronics sounds refreshing - by 2002 it had become a rare non-feature in large groups. The music is strongly coloured by playfulness and a sense of camaraderie. It could mean a fake serious-not-serious attitude, but it is not the case. The cheerful attributes of the music are the natural extension of Eichenberger's personality. He works his leadership in a understated manner, his clarinets remaining at the heart of the music without ever stealing the show. DOMINO CONCEPT FOR ORCHESTRA may not hold a revolution, but it presents high-quality structured improvisation."

"Domino Concept is glorious proof that big band improv doesn't have to descend into sweaty mud wrestling to make its point. Eichenberger's chipped, bristling clarinets are particularly impressive throughout, and the static drones of violin and viola (respectively Helmut Bieler-Wendt and Charlotte Hug) in Part II form a delicate backdrop to Ivano Torre's percussion and the breathy, sensual vocalisms of Marianne Schuppe and Dorothea Schürch. Change, when it comes, is handled masterfully; one could almost suspect the presence of a score somewhere, or least some pretty well-worked out conduction. A rewarding album, but one that needs some good concentrated listening to yield up its treasures."

"The London-based Emanem label hardly ever releases recordings not produced primarily by British improvisers. So you know that Martin Davidson must find something special indeed on the rare exceptions.

This baker's dozen doesn't employ the semi-familiar methods of either John Zorn (with their channel-surfing excess) or Lawrence 'Butch' Morris (who has mastered the art of conduction). Rather, the large ensemble works with silence and meditative calmness (what the liner notes call 'impulse and control'). Eichenberger marks changes of direction, which shape the interplay of impulse and control, solely by switching from one type of clarinet to another (he plays five of them, and is particularly effective blending his contrabass clarinet with tuba and vocals).

Of course, it's old news that much European improvisation is now more concerned with texture and silence than with hard blowing. Twenty years ago a band of thirteen might have focused all their energy on generating enough wind and heat to blow the walls off the studio, but (fortunately, perhaps) that moment has largely passed. The Domino Orchestra is a listening band, and excess is deftly circumvented throughout this hour-long performance. Saxophones playing extended techniques, along with clarinets, mewl amidst burbling brass, shards of guitar, agonistic vocals, and scraped strings and percussion. Thankfully, though, it's not simply an endless slew of textures (a sad outcome of some post-free jazz ensemble improvisation - restraint is one thing, but you've still got to go somewhere). There are sudden left turns (the thudding tattoo and brass of Part II, for example, or the symphony of chirps heard later in the piece) and changes of direction which keep the music playfully unsettled. Just when the orchestra seems ready to launch into tutti squealing, they pull back into the gentlest of drones over which the vocalists mutter incantations. Only in the closing sections is any real heat generated, but it actually means something given the restraint the ensemble admirably displays elsewhere.

Stripped-down, this neo-chamber ensemble takes the via negativa, communicating powerfully through what they leave out while leaving the listener to connect the dots between their subtle gestures, cryptic asides, and compelling allusions. What the Domino Orchestra lacks in hard-charging individualism, it repays in subtle, provocative group playing."

"The music of DOMINO is properly anarchic because it is a very delicate dialogue between individualism and a genuinely collective experience. It is thoughtful, cool passionate and also tender. Its difference from the usual all-in improvised rammy is what makes it so effective and ultimately so moving. I've listened to it four times straight now and it is still revealing new strategies and new possibilities."

"All these people have the skills necessary to interpret the spontaneous compositions that Markus has created. Here the musicians play with notes and silences and these ones are essential here to create the music that they want to transmit. The improvisation here is completely spontaneous and we can listen how well the instruments interact one with each other. There are memorable parts such as the one in Part II with interaction between the winds and the percussion. I recommend this to lovers of spontaneity and good musicianship."