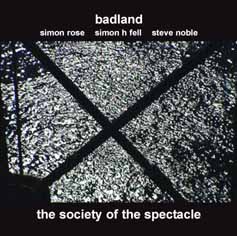 THE SOCIETY OF THE SPECTACLE

We look at the panorama and focus in on one particular part of the terrain to explore before moving on to another area.

Badland measures history in sound, not words or images.

The wind, strings and percussion are used in non-traditional and also traditional roles.

The collective language has always tended towards dynamic extremes.

We hope our music has some of the qualities of jazz in its original, unsanitised expression - and some others as well.

We don't self consciously deny the innate possibilities of our instruments which are celebrated and extended.

Improvisation doesn't belong to anyone.

Some of the best contributions to improvised music have been made by people not playing.

"This free-flowing trio has been doing its thing for about ten years amid intermittent personnel changes. The estimable bassist Simon H. Fell serves as the anchor and has been doing so for quite some time. Badland explores the dicey side of jazz and improvisation, where deft expressionism shines forth in multi-hued designs. The members of the trio pursue soft soundscapes with depth and contrast, manifested by percussionist Steve Noble's acute cymbal shadings. Fell's creaky arco bass lines and organic bass tones act as a foil to Simon Rose's scorching alto sax lines. The musicians render thrusting, circular passages as if they were attempting to exit a maze of some sort. However, they periodically desensitize the coarseness with subliminal movements and warmly stated mini-motifs.

Featuring variable shifts in tempo along with delicate fabrics of sound, this music remains unpredictable and at times mysterious. More often than not, the players soar skyward - with a vengeance. And they raise a bit of hell on The Society of the Spectacle (Part 1) and Mia, where Noble's rumbling rhythms underscore the trio's penchant for wreaking havoc on conventional jazz standards. The musicians' intuitive camaraderie is evident throughout. There's a divergent scope to the entire session, which firms up the sustentative elements of this first-rate outing."

"The trio's newest offering is concentrated and expansive, tipping the nod to multiple influences with a series of microhistorical moments that still exude unified individuality. No proof is necessary beyond the opening moments of Part One of the title track, sequenced, Boulez style, after Part Two. The 'classical' connection is appropriate, as the patterns with which percussionist Steve Noble opens the proceedings are focused, loosely proportional and juxtaposed with authoritative silences in the manner of Varese or even of Zappa; a vague Orientalism deepens the illusory mystique of early 20th century panglobalism. A reflective silence ensues, only to be shattered, irreparably, by a jump-cut into some uhr-swing, implied but never completed by a quasi-rhetorical pattern on ride; bassist Simon Fell doesn't exactly walk, but his rhythmic spikes belie deep listening and the half-homage of improvisational camaraderie. Simon Rose breathes Ayleresque fire through a saxophone soaked, but not drowning, in vibrato and collective musical recollection.

The slow build to fury is one of the things for which Badland has been justly praised, and Part Two of the title track rumbles and rises to a brilliant frenzy. More then anything though, SOCIETY OF THE SPECTACLE exudes luminous silence, huge vistas of space through which structures appear and submerge. Reeds in the Western World, a stunning vehicle for Rose, begins with such vast plains of no-sound. Rose is panned to the right, so that even when his Coltranesque utterances begin to shrill, blat and growl, silence hovers expectantly in the wings, only to be completely dispelled when Fell and Noble kick in, jazz style, at the zenith of Rose's solo.

This disc is the most satisfying Badland offering so far, both for the excellence and commitment in the playing and for the freshness with which each moment moves to the next. Sixty-six minutes flew by, and I'm eagerly awaiting more entries in this trio's brief discography."

"Outstanding in its level of sustained excitement, the group combine assured musicianship and adventurous temperament, their decisive execution coupled with a wholehearted dedication to improvised music's intrinsic precariousness. An energetic kit player, Noble also sounds metallic percussion with great sensitivity. Fell is a powerful generative presence and a source of subtle enhancements. Rose wails with ferocity or teases away at convoluted lines that have an almost folky feel. Together they convey a sense of a creative process unfolding into genuinely dramatic music. A gripping release from start to finish."

"The first two pieces are studies in controlled refinement. Pinpoint percussion, looping alto lines shaded with burred overtones, and scumbled arco are pushed to a simmer; ready to boil over at any minute, yet held right at that edge. The trio toys with conventions of the sax, bass, drums format as, for instance, the patterns of Rose's circularly breathed lines propel the music along rather than drums or bass. On the two-part title piece The Society of Spectacle, the surging Mia, or the searing intensity of the closing Reeds in the Western World, the three drive the improvisations along with arresting sheets of energy. Noble is in his element, prodding at the flow of the pieces, whether diving in with a well placed snap or crash or thundering along with an elastic sense of momentum. Fell seems to revel in this setting where, like his trios with drummer Paul Hession, he gets to flex within the context of explosive group playing. Even here, though, his keen ear toward careful placement and balance of timbres and density comes through. Rose's playing comes off particularly well. Here is a player who has absorbed the extended reed techniques of free improvisation, and channeled those rippling waves into a focused approach to phrasing and pacing that never falls in to showcasing or bluster."

"Badland is an occasional trio which has now been recording for over a decade. Simon Rose can certainly play poignantly, as he demonstrates right from the first notes of the opener, Kittiwake, on which his long, arching phrases dominate. By contrast, Elka opens with all three players exchanging rapid-fire, staccato phrases but evolves into them playing close to the threshold of audibility. Two versions of the title track are as close to free jazz as this trio gets. Fell and Rose could maybe lead you to believe it, with the saxophonist roaring at times like a man possessed. The dead giveaway is Noble; his drumming is improv (in your face, rock-tinged improv, at that), not the cymbal-driven pulse of the avant garde. Yes, it is the 21st Century, not the '60s! The threesome often displays a sense of subtlety and restraint; there is no hint of them trying to outdo each other, of trumping each other's aces. Rather, they listen and respond appropriately. As often as not, the appropriate response is to do little or nothing, giving the music a refreshing openness and a welcome sense of space."

"Recorded in Gateway Studios in April 2003, it features the trio of Simon Rose, Fell and Steve Noble in excellent shape. In his fragmentary notes, Rose mentions: 'We hope our music has some of the qualities of jazz.' If he means the gutsiness, the drive, the flexibility, the excitement of witnessing someone putting his creativity in the line of fire - then he has his wish. This music is not overtly jazz. In fact, 'jazz' might simply indicate that it does not belong to the introspective, rather Spartan kind of free improvisation. It is not a blow-it-all-to-Kingdom-Come fest either.

Powerful and twisted as he may be (he really knows how to bend notes out of shape), Rose can display an uncanny sensitivity, not unlike Paul Dunmall. Simon H. Fell's playing always seems to have two or three agendas; even the most instinctive bass lines hide alternate trains of thoughts that will surface later. Steve Noble's drumming is intense and multifaceted, an attention grabber from start to finish. Highlights include the short pieces Kittiwake and Elka, the raging Mia and the concluding Reeds in the Western World, featuring a gripping sax solo and a development that takes us very close to the American Free Jazz tradition."

"This trio plays a sequence of extended improvisations ranging from controlled passages - which could even have a good use as avant-theatre soundtracks - to full-blown, goddam uncontrollable music (don't call it 'free jazz' because it ain't) where the single elements fuse in lawless blasts of extracurricular instrumental possibilities. Adjectives like 'elegant' or 'subliminal' are pretty much banned from Badland's idiom; Rose exalts harmonics and ferocious intentions through his howling phrasing, which often has the flavour of conscious desperation; in his thoroughly detached seriousness, Fell is nevertheless able to bomb our chest with low-end grenades, showing his most radical face while never losing composure. Noble's surprising figurations gain muscle thanks to a precise choice of colours from his set, which he uses like super-glue to individuate transitions and solo spots as parts of a giant mosaic whose nuances come from the artists' essence more than their instruments. This is difficult, fervent music that burns quickly but it's not easily forgettable."

"Splendidly moody, often quite aggressive stuff from a trio whose work seems to have undergone several stages of fermentation to arrive at this highly concentrated and heavily fortified result. This is improvised music at its most tensile, with the emphasis being on music (rather than sonic art or degenerate sound effects) as much as on improvisation; Rose's booklet notes imply a frame of reference which incorporates both free jazz and free-but-not-jazz, and he's damn right. Quite apart from that, I'm always in favour of anyone who sticks up for the improvisational usefulness of the sniping, whinging alto sax as opposed to its nearest relatives. I also like strident, close-captured arco bass and percussion which is played rather than flailed at. All in all, then, I'm doing well here. As a free player Noble is possibly the only drummer of his generation to underpin his exploratory approach with the kind of fearsome chopsiness I associate with Tony Oxley; indeed, if asked to chuck in my two penn'orth I'd say he falls back on controlled technical precision rather too often for my taste, but his reasons for doing what he does are probably better than any reason I might have for suggesting otherwise. To be bought at once, then played loudly and very often."