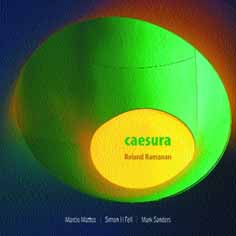 A Caesura is a musical/poetical term denoting a pause, break or cut. This title (and the titles of some of the tracks) refer to events in my life which partly explain why it has taken so long to release this CD.

CAESURA represents a development of the improvisation/ composition themes of my previous album and is I think, more integrated and musically successful. Which is code for: I felt more confident this time and the music is better.

Bloom's Blues (the Bloom of Joyce's Ulysses) and i No em (an anagram of someone's name) both use structure but in very different ways. The former is the most composed of the pieces, with melodies and specific sections. The second composition consists of a grid of instructions that the group follow, firstly together and subsequently at each individual's chosen pace. Gardener in the Graveyard has an improvised introduction which moves into a written theme accompanied by the trumpet. It is one of the few occasions where there is a pre-stated atmosphere or mood. Other tracks are completely improvised or almost completely improvised according to some simple instruction. I will leave you to muse on which may be which or simply listen to the music.

My first album, SHAKEN (Emanem 4081) was heard by chance in a taxi cab in Chicago by Peter Brötzmann which led to me playing with the great man.

A caesura for me, signals change and all change is opportunity; so who knows what will happen. I hope you enjoy our music.

"Ramanan's Milesian and Cherry dialects appear on Bloom's Blues, as he moves from muted to open bell passages within a grayscale context of dour bowed strings and metallic percussion. Mattos and Fell show an uncommon amount of rapport, developing harmonic lattices accented by the detailed patter from Sanders' kit. Ramanan plays wooden flute on One Sty Bone, its dry twittering contrasting with the squelch of Mattos' electronics. In a Different Circle serves up a frothy stein of free jazz with Ramanan's brassy bursts volleying across chattering drums and snapping-turtle strings. A switch to flute signals what sounds like an avian treetop colloquy. The leader lays out on Marcel Duchamp, a Fell solo improvisation stocked with stirring harmonic overlays, and Post Part, a dense duet for Fell and Mattos. The only misfire to my ears is the lugubriously discursive finale Waiting for En and En. Overall, the interplay on Caesura keeps to the quieter side, but without any loss of tension or depth, and the music is good enough to make one hope that the next Ramanan release won't be as long coming."

"CAESURA is indeed an extremely mature statement; some of the material is composed while the large part of it is improvised, freely or upon pre-determined instructions. Every movement sounds perfectly accomplished, with Ramanan playing with intelligence and huge soul, Sanders being his usual wonderful self - namely one of the most sensible percussionists that I've ever heard - and the fantastic pairing of Mattos' cello and Fell's double bass representing a concentrated affirmation of technical ability and spontaneous combustion, well evident in their engrossing duo on Post Part. One of those recordings which give back some hope for the future of contemporary music."

"The trumpeter and his free-wheeling quartet convey determinable focus during the life of these eight pieces. They kick the proceedings off with Bloom's Blues, which begins with Marcio Mattos' brooding cello lines, and Ramanan's whispery, muted phrasings. Yet, this is not a blues motif that is rooted within the traditional American vernacular. It's more about exercises in group-based counterpoint amid circular choruses and a softly woven ebb and flow. Here and throughout, energy is used with discretion as the artists' improvisational passages are rooted within detail-oriented nuances and contrasts. And there are quietly probing moments where you could barely detect a whisper via a democratic affair that spurs notions of the quartet actively engaging in telepathic communication. On In a Different Circle of, Ramanan steers a fragmented be-bop groove with darting notes atop his band-mates cleverly designed harmonic manipulations. Morever, the leader's musical visions feature an abundance of tonal variances, and sound sculpting elements, occasionally augmented by Mattos' subtle electronics treatments. The band also delves into avant, world-music grooves, largely due to Ramanan's use of a wooden flute and Mark Sanders' complex percussion manoeuvres. Nonetheless, it's an irrefutably intriguing, free-form/modern jazz exposition."