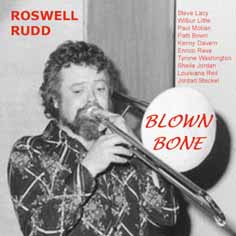 Eddie Korvin's Blue Rock Studio on Greene Street in Soho was a great place to record because it was so comfortable for musicians. Eddie was relaxed, there was a room upstairs for privacy, and the studio felt more like a living room. Eddie's studio and the players on this album just happened to be available on these two days March 27th and 28th, 1976 in NYC - Steve Lacy and Enrico Rava, both living in Europe but passing through NY at this time. The chances of getting all these people together at one time would be one in a million and this was that time.

They were all in my life at the time - Steve Lacy, Kenny Davern, and Sheila Jordan going back to the late 1950's and early 1960's; Patti Bown, Paul Motian, and Enrico Rava from the 1970's; Wilbur Little, Tyrone Washington, Louisiana Red and Jordan Steckel from the time of the recording. The continuity that I had with Steve Lacy until his passing in 2004 and still have with Sheila Jordan, Enrico Rava, and Kenny Davern is very emotional for me.

BLOWN BONE was the name of a jazz suite conceived in the late '60s but not recorded until 1976. The personnel were exactly right and they all just happened to be at the same place ten years after I wrote it. BLOWN BONE is about New York City and the beauty, the energy, and the struggle. BLOWN BONE, CEMENT BLUES, STREET WALKING and BETHESDA FOUNTAIN was the conceived order of the suite.

IT'S HAPPENING is the first movement of a later jazz suite, HEARTBREAK AND REFORMULATION written around 1974, dedicated to Albert Ayler.

BLUES FOR THE PLANET EARTH and YOU BLEW IT were originally conceived for symphonic wind band (and performed at the Peace Church in Greenwich Village in 1968) as my reaction to garbage scows polluting New York Harbor. If that desecration provoked such anxiety in me at that time you can imagine my anxiety now! Sheila took out the 'S' and 'F' words and improved on the lyric as she has always done on my music. Of course the version here with a sextet is scaled way down from the originally conceived version. The important part for me was always the programmatic message of the earth calling out to human beings to alert them to the impending crises.

I've recently listened to the original vinyl recording, which was released only in Japan in 1979. I still have the same feeling - that the players and the music converged in a way that made it noumenal.

To separate the two 1976 sessions, the previously unissued 1967 recording of LONG HOPE has been inserted. This was the prologue to my first jazz opera: THE GOLD RUSH. The lyrics are shown on a screen while the band plays and a Native American Chief smokes a peace pipe and gestures: 'People, we were put here on Earth to take care of each other........'

Roswell Rudd and Steve Lacy were reunited in 1976 following the original issue of the 1963 SCHOOL DAYS on Emanem (now on Hatology). Lacy's first visit to America in several years began with his recording TRICKLES (on Black Saint) with Rudd, Kent Carter & Beaver Harris, and ended with Rudd's BLOWN BONE. In between, Lacy played several solo concerts in various cities, including New York on March (not May) 16 (SNIPS on Jazz Magnet) and Montreal on March 24 (HOOKY).

Most of the musicians on these 1976 sessions are well known in jazz circles, so it is perhaps only necessary to comment on those who are not. Patti Bown first appeared on record with Dinah Washington in 1957, and went on to record with Quincy Jones, Oscar Brown Jr, Gene Ammons, Etta Jones and others, as well as making her own trio date. Tyrone Washington's recording debut was with Horace Silver in 1966. He went on to record with several others, and led four dates of his own. BLOWN BONE appears to have been the last appearance on record for both of the above. (It also appears to have been the last date in the USA for Wilbur Little and Louisiana Red who both migrated to Europe.) Jordan Steckel is primarily a sculptor, who builds his own drums among other things. BETHESDA FOUNTAIN is his only recording.

All the musicians play well on these sessions, but it is perhaps the composing and arranging skills of Roswell Rudd that make such an unlikely line-up work so beautifully together.

"Here's a glorious juggernaut of a reissue - one of those very occasional albums which not only seems to feature everyone you've ever heard of, but somehow manages to capture all their work to the best possible effect."

"BLOWN BONE speaks directly to trombonist Roswell Rudd's career-spanning eclecticism. The cast of characters is just as colourful with Steve Lacy, Enrico Rava, Paul Motian, Sheila Jordan and seven others convening for a small handful of ensembles. Rudd has always been about placing his slippery slide-calibrated brass in unexpected contexts. This consistently entertaining hodgepodge doesn't disappoint a whit on that score.

Bouncy freebop gets the party started on It's Happening with Rava, Lacy and Rudd frolicking through a syncopated head and into tasty solos from the trad jazz reminiscent horn configuration. Wilbur Little lays down a rubbery bass line and Motian maintains one of his signature aerated rhythms to keep the quintet percolating nicely. Both get belated solo space in the track's waning minutes. Vocalist Sheila Jordan joins the action on the ecologically-oriented Blues for the Planet Earth, a loose funeral dirge steeped in brassy drones that recalls the Art Ensemble of Chicago and paints impending planetary peril in polyphonous hues. The title piece, first in a four-part suite, unfolds as a rambunctious throwback to Rudd and Lacy's roots in progressive Dixieland bands with a septet strolling another swinging ditty girded by Patti Bown's comping electric piano.

The craziest combination crops up on the nine-minute Cement Blues, where venerable blues guitarist Louisiana Red, his axe ladled with plenty of echo, fronts an octet with Rudd, Lacy, soulful saxophonist Tyrone Washington and trad jazz doyen Kenny Davern on clarinet. The ensuing piebald jam is a mash-up of styles and temperaments that surprisingly works. It's also one of the finest blues-jazz fusions on record, staying true to its constituents styles while simultaneously evincing a helluva lot of fun and not feeling the least bit forced. The percussion populated Bethesda Fountain completes the suite with an octet rounded out by Jordan Steckel's bata drum and Rudd's delicate overdubbed mibra working over an effervescent Afro-Cuban groove. More please."

"Rudd's imaginative writing leads the musicians through repeated highlights, in which swinging frameworks and lyrical suggestions mesh in no-nonsense scoots through a multitude of genres and influences, one of the very few times in which one can't go wrong using the term 'fusion'. Rudd's sapient melodic sense brings his trombone to the fore in the most intense and enjoyable moments. A pleasing look to the past, BLOWN BONE could very well appeal to many different audiences: if you love skilful orchestrations and heartfelt playing this could be a nice gift."

"The album opener, It's Happening, shares much with Steve Lacy's TRICKLES; both were recorded in March 1976. The tune consists of a lilting head formed of chirps and earthy downbeat nesting, a perfect vehicle for Roswell Rudd's slushy tailgate, Enrico Rava's brassy pecks and Lacy's golden growl. A Monk-y freebop rouser like It's Happening fills the date with a marrow sometimes lacking in Rudd's mid '70s groups. Vocalist Sheila Jordan, a regular associate of the trombonist, augments the quintet on Blues for the Planet Earth and You Blew It, dusky swaggering laments blending pro-environment lyrics with free-time tone poetry and a clenched ensemble sound.

Louisiana Red's feature, "Cement Blues", blends his slippery electricity with a roguish ensemble thrum, Tyrone Washington's husky tenor fitting perfectly into the tune's rough-hewn and swampy urbanity. BLOWN BONE cements the breadth and diversity of Rudd's art, from the strangely poised Afro-funk of Bethesda Fountain to the eerie freedom of Blues for the Planet Earth. It's a shame, though, that such a telling document as this was virtually buried until almost 30 years after its initial release."

"The work on Blown Bone is mostly from consecutive days in March 1976, with the tight quartet of the first day augmented on the following by extra horns, keyboard and others. The 11-minute It's Happening is almost worth the whole set. It's a brisk, boppish theme, derived from a suite dedicated to Albert Ayler, and driven along by Little and Motian. Rudd's opening solo is no mean thing, but it is knocked for six by Rava's wryly majestic statement and then by a completely outrageous Lacy solo which seems to use the entire range of the horn, right down to tenorish growls, as well as sucked tones, perfectly controlled squeaks and pure breath sounds.

Sheila Jordan, who worked with Rudd on 1974's wonderful Flexible Flyer, is in for the next two tracks Blues for Planet Earth and You Blew It, conventional enough ecological laments redeemed by Sheila's extraordinary delivery and the free-form accompaniment.

The oddity [on the disk] is Cement Player, which is basically a vocal feature for Louisiana Red, but a useful reminder of how rooted Rudd was in vernacular forms."