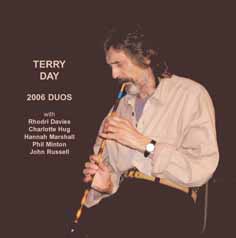 These five duos are amongst my first ventures playing the bamboo pipes in recent years away from the bosom of the London Improvisers Orchestra (LIO). The performances are also my first duo collaborations with everybody, except John with whom I combined back in the 1970s playing mandolin and soprano sax, and Rhodri with whom I duetted a few months previously.

I first met Rhodri when I joined the LIO in 2000 after an absence of 13 years from the improvised music scene. It was the perceptive suggestion of Tim Fletcher in 2005 that I form a duo with Rhodri – thus causing me to venture from the LIO into smaller combinations. As with Rhodri, I first met Charlotte and Hannah when they both subsequently joined the LIO.

I feel the bamboo pipes are suited to stringed and electronic instruments, therefore it was logical to play with Charlotte, Hannah and Rhodri. What was unknown for me was Charlotte’s vocalisations and Hannah’s passion, both of which took me by surprise and added another dimension to the performances. Equally, I didn’t realise how hard Rhodri plucked, struck and attacked the strings - but I do like the unknown and the surprise of improvisation. My reaction is to seek new sounds, texture and articulation on the pipes or otherwise.

John and I have worked together in all kinds of combinations and groups since the very early 1970s, and we know each other’s musical vocabulary very well. Due to the longevity of our musical relationship, I always feel very musically secure with John, and I know I can take the music to whatever area I choose and am happy to go wherever John chooses.

Although Phil and I have been in the improvised music scene since the 1960s, we have only ever combined on very rare occasions. I first heard of Phil via George Khan when they both played in Mike Westbrook’s Solid Gold Cadillac. The first group we were both in was Mike Figgis’ theatre piece Animals of the City in the mid-1980s. Even then Phil and I did not musically explore anything together. The only other time we played together was in a quartet with Roger Turner and John at John’s end of year bash in 2005. So here we are, finally, Phil the Mint and Terry le Jour on stage as a two-some – and as with all the other duos, Phil’s grunts and moans, noises and splurts caused me to explore new areas of the pipes and some varied vocalisations to boot. I must say that Phil gets some amazing sounds from that voice of his.

"2006 DUOS is a rare opportunity to hear one of British improv's most distinctive performers, Terry Day (People Band, Four Pullovers, Alterations) in five extended duos. Rare because ill health has curtailed Day's activities over recent years, but you'd be hard pressed to spot any trace of it here. Back in the glory days of Alterations, his anarchic quartet with Steve Beresford, Peter Cusack and David Toop, Day was, like everyone else in the band, a multi-instrumentalist, playing everything from drums to balloons, and often performing his own outlandish free punk poetry to boot. On DUOS he concentrates on three different sets of self-made bamboo pipes (as well as toy amplifier and plastic water bottle in places). In case you think that sounds like something you might hear in a hip New Age Zen sushi restaurant, think again: the bamboo pipe sounds more like a medieval crumhorn, a rich, reedy sound somewhere between a bassoon and a kazoo. And in case you think that sounds awful, and awfully limited, it doesn't, because Day conjures a huge variety of sounds out of it. As is usually the case with Emanem, the disc is jampacked full of music, and this time I'm not sure the inclusion of the duos with Minton and Russell adds that much, especially considering both men have just had their own Emanem outings in this same batch. The most surprising and varied playing is on the tracks with Marshall (vicious!), Davies (some of the harshest Rhodri on record) and Hug, whose use of different bows and a whole range of special effects turns the duo into a veritable micro-orchestra. My one reservation about this track is the inclusion of Day's vocals towards the end, which seems to push Hug into 'accompaniment' mode, as if in any combination of words and music, music had to take second place. On the strength of 2006 DUOS it's clear we should be hearing much more from Terry Day."

"With these duet improvisations, you’ll hear a cavalcade of abstracts and contrasts. On the twenty-three minute opener, violist Charlotte Hug’s gliding lines and scrappy encounters with Day often generate a surrealistic effect, where micro-themes disappear and refresh on a nanosecond’s notice. Regardless, Day produces mesmerizing sounds. In fact, the wide tonal spectrum he induces might conceivably be mistaken for electronics-based implements. He makes his pipes weep and yearn via the music’s indefinable frameworks.

The piece titled Framed features Rhodri Davies’ scraping his harp strings as the duo elicits notions of an unworldly state of being, awash with mutated dreamscapes and non-idiomatic twists and turns. Then with Rumblings, cellist Hannah Marshall mimics the leader's voicings due to her droning and rather solemn phrasings. They execute sounds and a mindset that toggle between angst and pathos. In addition, famed improvising vocalist Phil Minton squares off with Day during A Little Charver. In sum, Day’s longstanding reputation for producing outer realm musical jaunts remain consistent throughout the preponderance of these curiously interesting sequences of duets."

"Blame his health if you will, but the fact that only now I'm able to declare my unconditioned love for Terry Day's music is an indication of how much the world of improvisation has missed during his long absence, and also - in general - of how many musical treasures remain unretrieved due to ignorance or misfortune. After the fantastic INTERRUPTIONS, Day is here featured in five live recordings, each with a different partner. Terry plays bamboo pipes, a toy amplifier with echo and a shaken plastic bottle of water besides his voice.

The duet with Charlotte Hug (viola, voice) reports about a feverish research for the raggle-taggle states and moods caused by the absence of a scheme. Hug pants, sighs and shouts abruptly in between his stringed jawbreakers, while Day macerates his pipes' timbre with the intensity of a protester even in those instances in which different parameters are expected to be set, also finding a way to recite his words with granny's voice before turning himself into a mechanical siren, and both artists into baboons at the end. Rhodri Davies' prepared harp is the second guest in Framed; in the liners, Day observes that Davies is a robust plucker and, in truth, one fears for his fingertips at various points when listening to the metallic rattles and involuntarily detuned reverberations that he beckons, in addition to various harsher 'electric attacks' brought with small motors and other assorted gadgets. Day's response is quite adaptive, his reeds portraying muezzins and ducks imitating a drunk Ned Rothenberg clone, then answering his companion's questions with fierce fancies dipped in multiphonic sauce.

Phil Minton needs no introduction; his role in A Little Charver is basically to confuse our ideas about who's singing and who's playing. Day's bamboos follow him around, inviting him to join a two-way predigestion of notes that were swallowed before having a chance of being really formed. But they sure keep kicking those bellies from within, crying their innocence. Rumblings sees Day paired with cellist Hannah Marshall - my first meeting with her - in a slightly more reasonable intermingling of unadulterated imaginations that hint to a bleached skeletal counterpoint, although not devoid of emotional (and percussive) contents. The CD ends with the Terry Day vs John Russell match, a coalescence of delicate sparkle-and-pick accompaniments to Day's most reflective (but ever-unpredictable) linear illustrations, which swiftly turns into a amorphous creature where contrapted rasgueados and superfluid tweets seem to co-exist like nowhere else. Day blathers and yelps at various points, but make no mistake: this is great stuff all the way. But not for everyone."

"Terry Day is a veteran improviser of the highest order, illness having kept him out of the game from 1987-1999. Day's primary focus is his bamboo pipes, on which he has developed a staggeringly large vocabulary of slides, moans and growls that can complement any collaborator. He brings out the best in those privileged to work with him, especially apparent in his duet with violist and vocalist Charlotte Hug, whose performance on A Hug a Day is one of the finest and most focused I've heard from her. Equally inspired is Day's humorous encounter with the irrepressible Phil Minton on A Little Charver, Day's vocal whoops and shrieks at one point making bizarre counterpoint with Minton's 'double-stops' and giving the allusion of a trio! Day's whimsical poetry is a welcome addition to any performance, and we get a surprising number of vocal timbres from him, whether or not the English language is a recognizable element. Russell appears in this context as well, and while portions of Pardon Me are somewhat more sedate and a bit more overtly repetitious than the other duos, he and Day make some of the most nostalgically beautiful music on the disc, tonal centres looming large, fleshed out by Russell's harmonic interventions, only to fade into relative obscurity."

"Ill-health curtailed Day's activities in the 80s, which was a sad loss to a scene that badly needed colour and light to temper the (self-)seriousness of much British improv. Consequently, it was great to see him return to duties in 2006 with a set of briskly unidiomatic duos that major on his bamboo pipes-playing and on new and older improvising relationships. The sound is unique and lovely, and a warm welcome back to action."