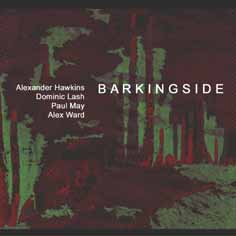 A quartet of four excellent young improvising musicians based in London and Oxford, none of whom have ever been to the outer London suburb of Barkingside.

"Despite sharing two of its members, Barkingside sounds very different to The Convergence Quartet, having no hint of its jazz syntax. Rather than focusing on individual contributions, Barkingside, predominantly, all improvise simultaneously, creating a free flowing, ever shifting soundscape. Alex Ward's clarinet is the sound that dominates the group, constantly probing, goading, reacting, making things happen.

At times, Ward almost takes the role of soloist, leading the foursome to some thrilling peaks, but he is never less than fully aware of the others and is ever ready to make an unexpected swerve in reaction to them. In a similar vein, Hawkins' piano clearly displays free jazz influences, piling up torrents of notes in a display of technique that is breathtaking. However, he never becomes the sole focus of the group and is just as impressive when adding spare, economic punctuations to four-way exchanges.

Altogether, the level of group empathy displayed here is scary given that the musicians had played comparatively few gigs together before these recordings were made. Barkingside have a very bright future."

"The instrumentation is that of a conventional jazz quartet, reed plus rhythm section, but the ensemble directs its focus toward transposing that familiar template to the format of free improvisation. Alex Ward's clarinet is a bit unusual for the context and he brings to the straight horn a bevy of extended techniques, some of which parallel the vernacular of Canadian Francois Houle. Reed pops, mouth-puckered expulsions, coarse-grain multiphonics and relatively straightforward melodic phrasing all come into play on his palette. Drummer Paul May evinces influence from another Paul, this one answering to the surname Lytton, in his preference for kit accoutrements, abstracted clatter, and textured noise. In the closing minutes of the opening Alopekis his rubbed cymbals sound vaguely like a tamboura with their web of resultant drones. In the final third of Carnauzer there's a segment where it sound like he's repeatedly lobbing quarters into an ashtray balanced on snare head.

For pianist Alexander Hawkins the imperfect analogue seems to be Veryan Weston, as he applies gesture-laden dissonance to fragmentary chords and clusters. Bassist Dominic Lash divides time productively between pizzicato and bow, channelling strident energy through either means of sound production. Communication is a near constant and the two longer pieces unfold in episodic fashion with various combinations undertaking ideas collectively or in intentional opposition. The music is heavily percussive in places, not the least because of May's contributions, but the four also accord close attention to dynamics, receding from stentorian tumult to near silence on numerous occasions. At roughly a third the length of its bookends, Basenji begins with in an almost chamber jazz vein before crumpling into more carefully-timed collisions and explosions. "

"All three improvisations contain large doses of chiaroscuro interplay, with rare moments of clamour; basically, they sound like seamed preludes and interludes with ample spaces given to single instrumentalists to demonstrate a prowess that goes beyond the collective homogeneity. Ward's clarinet timbre is both matter-of-factly and highly refined, his control of nuances total during interchanges and soliloquies demonstrating that the meaning of 'note squandering' is unknown to him. Pianist Hawkins introduces a half-formal, half-unchained method of choosing colours, resulting in several pictures of nervous positivity, still devoid of hypertensive gestures. The orthodoxy factor is taken care of too, courtesy of double bassist Lash whose work on the instrument is refreshingly snappy but, at the same time, almost sartorial in choosing links and connections. May is the tickler of the group, always suggesting new frames which he promptly disintegrates, sprouting rhythmic concepts one after another with youthful enthusiasm. An ensemble that leaves a positive impression without actually doing nothing truly astounding. That speaks volumes."