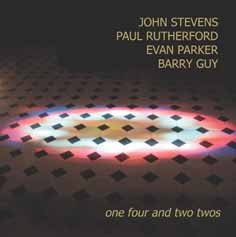 ONE FOUR AND TWO TWOS

John Stevens often organised gigs and recordings with musicians he had worked with in the past. In the case of this quartet session, Barry Guy, Evan Parker and Paul Rutherford had all been members of the Spontaneous Music Ensemble in the 1960s (as heard on WITHDRAWAL Emanem 5040), and here they are reunited a decade later. All four of them had been involved in other projects in the intervening time, sometimes with some of the others, sometimes not. So it is not surprising that the music does not sound the same as that they had made together earlier on. One thing they had learnt and kept was the ability to listen and work as a group, even though the music was generally more like extroverted Free Jazz, with some quieter slow moments.

Some discographies erroneously list the quartet under Parker’s name. However Parker confirms that it was organised by Stevens, not him, and points out that he never claimed it was his date. He also reveals: 'These pieces were the sound check for a recording that never happened. We went to the pub and never got back!.' Fortunately this sound check was good enough to become the issued recording.

Two very fine previously unissued duo sessions have been added in order to take the music up to CD length.

Paul Rutherford and Barry Guy were two-thirds of the group Iskra 1903 in both of its incarnations. They also performed as a duo from time to time, and the duo tracks heard here are from an Italian tour, made at a time when they were using bespoke electronic boxes made by Ian Mackintosh, although in this case only Rutherford is doing so. These boxes can also be heard on a 1981 solo Rutherford performance on TETRALOGY Emanem 5202 and two years later on Iskra 1903’s CHAPTER TWO Emanem 4303.

The 1992 pieces come from a gig that did not go as planned. The evening was supposed to be the Spontaneous Music Ensemble (John Stevens, Nigel Coombes and Roger Smith) playing opposite Evan Parker solo. However, Coombes was unable to be there, so the other three musicians played solos, duos and a trio. The two pieces included here are all the music made that evening by the duo of Stevens and Parker sounding very much in an SME mode first heard on record on SUMMER 1967 Emanem 4005.

"The quartet material is flamboyant: European free jazz, more 'active' than the SME’s usual playground, with some electronics (Guy) and a John Stevens in exhuberant shape. The duos are less well recorded, but the three Rutherford/Guy pieces are gorgeous."

"The result is more extroverted free jazz compared to early SME stuff. The longest piece, 4,4,4, is a wonderful interaction of these extraordinary players, with Stevens driving them in front of him, shouting in rapture like an Indian chief on warpath. But their SME roots are still audible in more contemplating, quieter parts (for example in 3,4,4) where you can hear something which has always been the key element of this music: it is the ability to listen and to interact (or as Stevens put it: 'If you don’t listen why are you in a band?').

In addition to the original LP two previously unissued duo sessions have been added on this reissue. Paul Rutherford and Barry Guy were two thirds of Iskra 1903, a revolutionary percussionless trio. You can hear what a marvellous player the late Rutherford was (he is really missed!), all the three pieces are wild, sick rides, both musicians are struggling with each other on a high technical level and Rutherford is adding some interesting weird electronic sounds.

The 1992 pieces are a duo of Stevens and Parker sounding very much like early SME on the one hand, on the other hand it is truly Parker as he sounds in his duo with Paul Lytton, full of energy, a masterful player accompanied by another genius."

"Another vibrant slice of London-based improvisation from the 1970s. The peerless lineup is in gnarly form on these sessions. The first five tracks are fully exuberant from note one, buoyed in no small part by Stevens’ almost ecstatic playing and vocalizations. The general feel of intensity and barely contained energy is found throughout this session. The second track features some furious crossing lines from the horns, with Guy’s mildly distorted bass seeming to propel them as they dart in and out of each other’s way. It’s a real treat to hear Rutherford so exuberantly plumbing the depths, and there’s an almost enchanted passage where (if not for those low scuffles that are such a trademark of his sound) Guy could almost pass for Derek Bailey! They move from there into the fractured, keening third piece, and beyond that to the variegated fourth performance. Spitting, churning soprano and big robusto trombone lead the way into a spacious, abstract, quizzically reflective section of such deep vocalic exchanges and an intense focus on worrying the tonal centre.

Following that are three tracks (never before issued) from a Rutherford/Guy duo date in Milan in 1979. Here it’s Rutherford who uses the electronics, augmenting specific features of his language (a muffle, a brassy overtone) while Guy darts and slashes with the smallest, most incisive gesture or the hugest yawp of sound. The two lower register instruments cover quite a bit of territory, from lovely groan and fluttering metal to the alien atmosphere of the third piece (where an off-mike Guy sounds particularly spectral). Finally, there’s a pair of live tracks from Stevens and Parker (just on soprano) from 1992, right around the time of Corner to Corner if that gives you any indication as to its language. Flinty, focused, and wholly committed, these pieces cap off a terrific and truly valuable release."