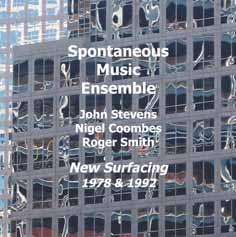 * NOTE: Both previous issues were taken from cassette copies. These new reissues are taken from original tapes, and therefore have much better sound than before.

This release containing recordings from 1978 and 1992 could be subtitled the beginning and the end of the SME string trio. The Newcastle concert was one of the first performances after the 1977 quartet reduced to a trio; and Nigel Coombes left the studio and the SME immediately after the 1992 piece.

The SME had changed radically during 1976 ending up with John Stevens playing with unamplified string players Nigel Coombes, Roger Smith and Colin Wood – the last named being on board just for the first year or so.

Most of the recordings of the trio were not released until after Stevens’ untimely death. The later 1990s, saw the release of two compilations on Emanem CDs, HOT AND COLD HEROES (4008) and LOW PROFILE (4031). When compiling these, I was strongly advised to consider a 1978 Newcastle concert from a brief tour opposite the duo of Steve Beresford and Tristan Honsinger. Both Coombes and Smith consider this concert to have been one of the best performances by the trio.

The drawback was that the only copy of this recording then available was a distorted cassette. There was no sign of the original tape. An additional problem was that the performance was in an over-resonant room. At the time, I decided that the recording was too bad to issue, even though the music was very fine. I subsequently gave up trying to find a better source, but managed to clean up the sound considerably, and eventually issued it on TRIO & TRIANGLE (4150) in 2008. Most of that CD though was a reissue of a 1981 concert mainly featuring a larger group.

Meanwhile, some years ago, unbeknownst to everyone I had managed to contact, several tapes languishing in a Newcastle studio were rescued by Mick Sharp just before they were to be thrown into a skip. One of these was the original tape of the SME Newcastle concert. When Sharp moved house, he asked Rhodri Davies to give the tapes to Karen Brookman. She informed Steve Beresford, and he passed the information on to me because I had recently released a poor quality version of the SME music. Many thanks to all the people in this chain, even though the tape arrived just too late!

The sound from the reel-to-reel tape, while still imperfect, is much better than that possible from the cassette. The main advantage is the almost total lack of distortion and unwanted noise. Hence this much more listenable second edition.

One trio recording that was issued fairly promptly was the final studio date, although for some reason the released version was taken from a cassette copy and shortened. This was used as a filler on a Konnex CD of Stevens' 4, 4, 4, session (recently reissued on Emanem 5027). A while ago, Roger Smith gave me this material on a DAT, and it turned out to be considerably clearer and somewhat longer then the previously released version. So it can now be heard in higher fidelity, with a sound that is much drier and hence more intimate than the Newcastle concert.

"The two Newcastle tracks can only be described as stunningly good. All three players are in top form, both individually and collectively. Dramatic and garrulous. Frequently egged on by Stevens, Coombes, in particular, repeatedly steals the limelight. All three players sound as if they are having a great time. More!"

"Recorded in Newcastle in 1978 and spread over two tracks, the first a snappy overture to the expansive inventions of the second. The newly acquired concentration on string texture heralded a fundamental shift in SME thinking. Smith's twig-snapping brittleness and Coombes's scrapping violin drones questioned the basis of the group's previous identity and focused on a new set of timbral concerns. The knock on effect on Stevens' kit playing was profound. His tightly strung snare drum was a well-heard response to the high register, taut provocations of his string section, and he pirouetted across his kit with the grace of Rudolf Nureyev, while keeping his Elvin Jones like intensity.

"Newcastle 78B communicates a loose rhythmic structure, where Coombes’ staccato phrasings, guitarist Roger Smith’s contrasting chord voicings and Stevens’ smack, dab percussion patterns spawn a loose, asymmetrical pulse. Here, the musicians take you on a bumpy and rather sinewy course, enamored with somber undertones and spiking crescendos, all topped off by Stevens’ howling trumpet lines. Sure enough, this 2008 release intimates a wide panorama of emotive group-based interaction, which in part, symbolises the historical relevance of the British free-improvisation genre."

"The first two tracks were previously included on TRIO & TRIANGLE. For that CD, they were sourced from a distorted cassette tape and cleaned up. Although the results were acceptable, there is no doubt that the versions here — sourced from the original tape of the concert — display a quantum leap in sound quality.

This version of SME demonstrated that unamplified strings can produce improvised music as dramatic, intense and exciting as any, a point reinforced by the third track from 1992 at the end of this trio's existence. Originally released on Konnex in a truncated version, this studio-recorded piece is over half an hour of fluid, fluent three-way interaction which makes gripping listening."

" On both cases, the line-up is Stevens, Nigel Coombes and Roger Smith (recorded 14 years apart), and in both cases Emanem has had access to the original tapes instead of the cassette copies previously used. The sound is significantly better, and these are very satisfying performances from a group whose music never was easy."

"The Newcastle concert was performed in a space that spawned a bit of reverberation, offering a somewhat unintended depth and distance, but the recording quality is adequate. Nevertheless, the trio's astonishing intuitiveness comes to light. Nigel Coombes often bridges the proceedings between his cohorts as John Stevens is a tireless multitasking machine, performing on various percussion implements amid a few vocal antics. The musicians' intersecting subplots occur within frenetic and oscillating passages, along with some pathos enacted by Stevens' cornet choruses. Smith's nimble picking often shades or underscores the holistic element, spanning high-spirited dialogues and vastly expressive interactions. Indeed, the group's synergy is framed on lightning fast interpretations, responses and reactionary measures.

On Complete Surfaces, which is the output of a 1992 studio session, the trio infuses more of the same, running the gamut of what is humanly possible for three men to accomplish within a half-hour. Moreover, the artists' collaborative sense of the dynamic could be evaluated with an oscilloscope, or so it may seem. As anticipated, these archival recordings once again provide credence to SME's imaginative compass that, among other positives, was an educational institution in itself."