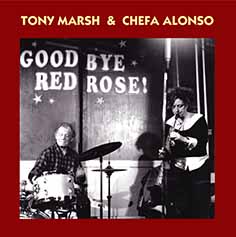 From 2004 to 2008, I lived in the north-east of London. It only took twenty minutes to cycle to the Vortex, five minutes to Ryan’s bar and fifteen minutes to the Red Rose, my favourite club (and that of many others).

In the Red Rose, my true university, I listened to some of the best concerts of my life, low budget yet by some of the best musicians around in this ample yet cosy venue with a movable stage depending on the ensemble. Various Freedom of the City festivals took place there, in a jam-packed and vibrant environment.

I joined the LIO (London Improvisers Orchestra) and played with musicians like Steve Noble, John Edwards, Ashley Wells, David Leahy, John Russell, Veryan Weston, Hannah Marshall, Vanessa Mackness, Marcio Mattos … Tony Marsh and I had a duo during 2008/9 and gave numerous concerts in London and Spain. Our first duo concert was part of the last Red Rose concert that took place before the club was closed (January 2008).

Tony was slender, quiet, and discrete and focused all his thoughts and energy on the music he listened to, and the music he performed, which was strong like a rope yet delicate like a butterfly.

Thank you for all those playful, intriguing and passionate musical conversations.

Chefa Alonso (born 1955) first came to my attention during her four-year London sojourn when she played her small percussion kit at the Red Rose in both small groups and the London Improvisers Orchestra. Later I heard her on soprano saxophone, initially in the trio Akafree with David Leahy and Javiar Carmona (FREEDOM OF THE CITY 2006 on Emanem 4139). She was superb on both instruments – one could hear that she had been listening to the right people, but more importantly, she had found her own fluent voice on both.

Tony Marsh (1939-2012) faded in to my life. I was vaguely aware of him playing in more conventional groups decades ago. However, it was his playing in Evan Parker’s trios at the Vortex, first with Veryan Weston and then with John Edwards, that really made me sit up and notice his tangential approach – he never seemed to hit anything at the expected moment or volume, yet he kept a forward momentum going. (Every trio gig was sensational – if only there had been a good recording.) Like Chefa, he also appeared with the London Improvisers Orchestra, so it is not very surprising that this 'made for each other' duo came to be.

The first music heard here was part of a Mopomoso gig, organised by John Russell, that was the final music to be played at the Red Rose, a pub with a theatre in its large back room that had just about the best acoustics in London. The premises had been sold the previous week, and the new owners decided they would make more money using the space for snooker and strippers (simultaneously?). When this proved to be unsuccessful, the musicians were (indirectly) invited back, but by then they had found other, more friendly locations with somewhat inferior acoustics, such as the Vortex. [The Comedy Club, which used the hall on Saturdays, did return until the building was completely demolished in 2013. Since then they appear to have moved to the House of Commons.]

The second gig on this CD is from FlimFlam, a regular series organised in the basement of Ryan’s bar for the last fifteen years by Alan Wilkinson (one of the finest high-energy saxophonists around).

Finally, there is a concert by the duo from their Spanish tour, in January of 2009 at Huesca, a town located in the Pyrenees in the north-east.

After this period, Chefa Alonso returned to her previous base, Madrid, where she continues to be one of the leading members of the improvisation scene there.

Tony Marsh remained in London, where he continued to perform with a large variety of musicians, and put together some interesting new groups (such as that on QUARTET IMPROVISATIONS, psi 11.06). He was supposed to perform solo at the 2012 Freedom of the City festival – I gave him my metallic hub-caps to enhance his kit – but sadly he died from cancer a month beforehand.

Tony Marsh and the Red Rose are sorely missed. I suppose one can say the same about Chefa Alonso, but I’m now only five hours drive from Madrid.