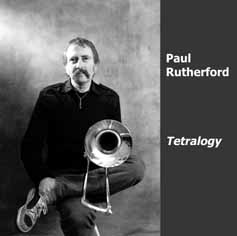 Paul Rutherford (1940-2007) was surely the most original and inventive (and enjoyable) trombonist of the last 40 years, and also one of the greatest exponents of free improvisation. It is therefore appropriate and desirable that recordings of his excellent music, like the four in this collection, are made available to the public.

The two sets on the first CD were recorded at the ACTUAL-81 festival in London organised by Anthony Wood. The solo set is unusual in that a considerable amount of electronics were used to enhance the trombone or euphonium. The additions include a voice-mike (with added tremolo), a bespoke box made by Ian Mackintosh, and probably standard items such as ring modulators and octave dividers. These were all controlled by the soloist, and used in various ways: to provide an apparently random counterpoint, to produce a varied response to the brass instrument and to distort and modify the sounds of the horn.

Rutherford’s voice has been an integral part of his playing ever since he independently started producing multi-phonics some 40 to 50 years ago – here the use of a voice-mike emphasises his voice more than usual. His interest in using electronics arose when working with his trio Iskra 1903 in which the other two (string) players always used them.

Three days later, Rutherford convened an improvising brass quartet with fellow trombonist George Lewis, Martin Mayes (French horn) and Melvyn Poore (tuba). They performed two pieces (the first is marked as two tracks). There are wonderful solo moments and duo interactions, but perhaps the highlights are the ensemble sections which are fine examples of spontaneous arrangements.

My original plan was to issue these two items on a single CD; but it occurred to me that any listener not otherwise familiar with Rutherford’s work would get a strange introduction, as these two are very different to anything else of his on record. So I thought that a second CD of his more typical work from the same period would be appropriate.

Riccardo Bergerone recently came up with the Pisa Jazz Festival solo tape, which presents Rutherford without any electronics. Even with just his trombone or euphonium (augmented by his voice) he comes up with a remarkable range of sounds, and unique lines involving wild leaps. The performance of two pieces (again, the first is marked as two tracks) is almost complete.

The final section is something by the working trio that Rutherford set up to contrast with his other trio (Iskra 1903). It features brilliant work by two (then) young musicians as well as the leader. He wanted me to issue this at the same time as the material they recorded the following year, but there wasn’t enough room on GHEIM – Emanem 5034. The format of this session is slightly different, in that each piece begins with a short solo. Rutherford uses his euphonium on his feature – it would appear that he also uses it on the first section of the ACTUAL-81 solo, and the last of the Pisa solo.

Thanks are due to Jean-Marc Foussat and Riccardo Bergerone for recording the music and making their recordings available, and, above all, to Paul Rutherford for making so much wonderful music.

"TETRALOGY is a substantial addition to Paul Rutherford's recorded legacy. These sessions detail how the trombonist incorporated innovative techniques, a distilled knowledge of jazz idioms and humour to thoroughly creative ends.

The opening solo set features Rutherford's distinctively mercurial phrasing augmented by a bevy of electronics, including an octave divider, ring modulator and voice-mike. These live improvisations balance wry humour with nimble virtuosity. For over half an hour, Rutherford veers from the sublime to the ridiculous, engaging in a wily game of virtual call and response with himself, accented by a kaleidoscopic array of EFX.

Spare and introspective, the unaccompanied cadenzas and intimate duos at the core of Braqua are bolstered by periodic interludes awash in hazy counterpoint and unfettered polytonal chord voicings, revealing the timbral possibilities of brass ensembles. The lissom arrangements and nuanced harmonies are surprisingly coherent, and are even more impressive when one considers that they are wholly improvised.

The second disc opens with The Great Leaning, an acoustic solo performance on trombone and euphonium from 1978. Showcasing Rutherford's limitless technique, this epic 38 minute improvisation offers as diverse an array of sound effects, textures, timbres and tones as the electro-acoustic Elesol. His horn sputters, brays and howls, eliciting all manner of vocalised cadences while he interpolates intervallic runs and soaring glisses for thematic consistency; his knack for crafting melodic kernels from abstract fragments remains an impressive part of his legacy.

The tri-part One First is a spirited set. At just under half an hour, this is the shortest work of the anthology, but also the most ebullient - a buoyant exploration of post bop angles, modulating tempos and vacillating dynamics that finds Rutherford inspired by Rogers and Morris' spry, conversational interplay."

"As Joni Mitchell wrote, you don't want what you've got till it's gone. So it has proved with legendary trombonist and euphonium player Paul Rutherford. A massive void has been left since his sudden death in August 2007. Sad to think we'll never see his walrus moustache and distinctive red braces again, listen to his ever-sensible views on the state of the world or hear him live as he conjures an affecting solo performance from thin air. That is why this double CD, containing four previously unissued sessions, is such a pleasure. Together they give a good impression of Rutherford's talents and the breadth of his musical vision.

The opening solo set with electronics makes a fascinating period piece. By today's standards, the electronic tones sound primitive but have a naive charm - on a par with basic sine wave generators or the dreaded Stylophone. They can be something of a distraction, and are not missed when they are absent. In 1981, however, improvising with any electronics was bold, innovative stuff and here it brings out Rutherford's best - playing rich and complex enough to outweigh any misgivings as he occasionally complements his trombone and euphonium with vocal sounds and tambourine in a warm, free-flowing set.

From the same month, an all-brass quartet adds a second trombone plus tuba and French horn. Opening with solo trombone, there is soon a wealth of detail as all four instruments contribute to a soundscape in which it becomes impossible to tell who's who as the instruments overlap and move around. It is not all full-on stuff, though; there are occasional duets from every possible pairing, as well as solo passages from each artist, with Rutherford's rich fruity sound particularly dominant.

After the Pisa solo set - this time without electronics, and mellower than the London one but equally rewarding - is a trio with bassist Paul Rogers and drummer Nigel Morris. With bass and drums, Rutherford reveals another side of his playing, producing rapidly articulated passages that contrast totally with the more leisurely pace of his solo playing, where he seems to savour and sustain every possible note. Partly the change of pace is necessitated by Rogers and Morris's playing, who drive things along with gusto, Rogers' playing a particular wonder to hear.

So, four complementary and contrasting aspects of Rutherford that add much to his existing discography whilst also providing an excellent starting point. Listening to this moving music, it is like he is still with us. One of 2009's very best."

"More evidence of Martin Davidson's knack for digging out archival material of interest to fans of vintage British free improv, in this case four miscellaneous sessions by the late trombonist Paul Rutherford. Truth be told, only one of them is prime-cut Rutherford, a 1978 solo set performed in the unusual acoustic of Pisa's open-air Giardino Scotto Theatre. The density of event is extraordinary, the ideas cut into each other at a bruisingly rapid clip and every so often squashed down in half-strangled protestations, as Rutherford spars joyously with the quirky amplifying properties of his surroundings - though there's also a bizarre but fetching detour into a kind of grisly stasis, the trombonist's aggrieved moans peppered by microwave-popcorn sputters. Though there's already a lot of Rutherford solo material available on Emanem, this is as good as any I've heard.

The other solo set is a less typical performance, a 1981 London concert where Rutherford makes extensive use of electronics - self-controlled, apparently, though they often seem to have a daft life of their own. The computery bloops and whistles have a lo-tech charm but are maddening to listen to at length, and the penumbral ringing that's sometimes audible gave this reviewer tinnitus flashbacks. On the other hand, Rutherford is in really fiery form here, popping off brusque, unexpected sallies in a stop-start rhythm very different from his acoustic work. He also makes great use of the voice mic to amplify his hums and growls (it's the one electronic element here that really works). Wonderful playing - but it's still hard work unless you're adept at mentally bracketing out the more annoying elements.

From a few days later at the same event, the ACTUAL-81 festival, comes an equally unusual and more satisfactory session, a brass quartet. The all-out tug-of-war passages tend to be the best, with Lewis and Rutherford in particularly skittish mood, throwing off delightfully contrary ideas. The talky sotto-voce passages don't do a lot for me, but the queasy quasi-drone episodes and veering chorales are quite effective. The set also includes a 1982 studio session by Rutherford's trio with bassist Paul Rogers and drummer Nigel Morris, predating their sole album GHEIM by a year. Rutherford is recessed in the mix, but his drolly inventive monologues are as pertinent and ideas-rich as ever. The engine-room balance seems a bit off though, with Rogers in total melodic/rhythmic hyperdrive and Morris hooking up with him only occasionally, but the three tracks are a worthwhile addition to the trio's small body of work."

"I listened to TETRALOGY repeatedly these last days, in different circumstances: concentrated, distracted, on the train, with headphones on, in my room as a complement to the sound of hard rain (apparently the sky is still mourning Paul Rutherford’s premature passing in 2007). After all these years, and following the enjoyment of the double CD in question, the adjective that remains stuck in the brain as soon as the man starts playing is 'loquacious'. Not only because the English trombonist used to employ the voice in his dissertations, the music frequently recalls a person who – whatever the attention level of the neighbouring people – will incessantly continue talking of everything with constant shifts of dynamics and accents. If you want to hear me, they think, that’s all for the better. If not – well, thoughts must come out one way or another.

It’s exactly that sort of energy – fused with an inextinguishable fantasy – that defines Rutherford’s magnitude. When performing solo, as the concerts from Pisa (1978) and London (1981) contained here clearly show despite some technical deficit, he finds ways to appear amusingly colloquial even while attempting incursions into the realms of the most convoluted improvisational possibilities, sometimes with the aid of a couple of electronic gadgets adding a touch of cheap sci-fi to the proceedings. What’s received is not the idea of a struggle, but the picture of a down-to-earth virtuoso enlightening us with countless melodic snippets occasionally accompanied by throat-injuring gurgles and cathartic grunts. In the ensemble settings that inventiveness is shared with joy and brainpower, the resulting sums absolutely worthy of being collocated between 'jazz' and 'rejection of category'. That Rutherford is not around anymore – providing twists and turns to what lately has been dangerously heading towards modish flatness – is a real shame."