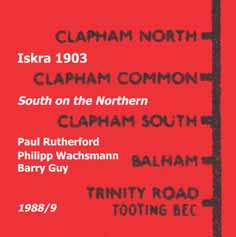 SOUTH ON THE NORTHERN

These two concerts come from an eight-year gap in the published recordings of Iskra 1903, between the 1983 tour heard on CHAPTER TWO and the concert heard on FRANKFURT 1991. They certainly show that there was no musical reason for such a gap – on the contrary, they make this listener want more. This surely must have been one of the most musically consistent bands ever, with this second version continuing the high standards set by the original edition.

I cannot recall hearing a dull, let alone bad, performance of Iskra 1903. Even the music they recorded around 1971 for a film sound track, BUZZ SOUNDTRACK, although somewhat restricted compared with their 'normal' performances, is still enjoyable good music. (The fact that it was put down in a book full of drivel only goes to confirm its worthiness.)

Madelaine Davidson describes the music of Iskra 1903 and a few other such groups as being 'internally consistent but not conventional.' In most music, consistency (where it exists) does depend on conventions such as a predetermined structure: a chord sequence or modes and/or rhythm and/or a specified chain of events, etc. In aesthetically successful free improvisation groups like Iskra 1903, even the structure is completely spontaneous and depends upon the ability of the musicians to play together and go with each other.

The result is a very wide spectrum of music ranging from slow and quiet to fast and furious, but usually staying in between these extremes. The music is always unpredictable, yet it remains totally consistent. There are no forced or preplanned unnatural moves to get from one scenario to another – one is usually not aware that the music has changed until sometime after it has.

It obviously helps that all three musicians are seasoned improvisers, each with their own distinctive voice, but also each with the ability to fit in with what the others are doing. Paul Rutherford may have put the group together in the first place, but once the music started he was no longer the leader. All three played an equal role with no one self-consciously following or imitating anyone else. Yet they managed to stay consistently together – surely one of the most difficult and rewarding skills in any area of music. Notice also how Philipp Wachsmann and Barry Guy skilfully enhance their playing with electronics, broadening their palettes considerably.

Iskra 1903 seemed to fizzle out sometime in the early to mid-1990s when gigs like these became financially impractical. (Such local gigs were virtually never financially rewarding, but could at least cover the cost of getting to and from the venue.) Perhaps the group really ended in 2007 at Rutherford's funeral where Wachsmann played a short improvised solo that managed to invoke aspects of the trombonist's playing without resorting to pastiche.

Sometime before that very sad day, Wachsmann had given me the cassettes he made of the two complete gigs heard in this double album, and I was determined to issue them, with Rutherford's concurrence. The fact that it has taken me so long to issue them has nothing to do with the music, except perhaps that Rutherford left so much great music behind that it was difficult to know where to begin.

"Paul Rutherford's trio Iskra 1903 existed in two different editions. Thanks largely to the efforts of Emanem (with a contribution from Guy's own Maya label), both editions have been well represented on disc, excellent news given the importance of the group in the development of improvised music and the uniformly high quality of their music.

In typical fashion, the sound of Rutherford's trombone constantly commands attention, as he sings songs full of drama, emotion and pathos through it. The gentleness and lightness of his playing makes the music defy gravity and belies the stereotypical reputation of his instrument. Suffice to say that when he and Wachsmann trade phrases it feels as if the trombone and violin were made to be played together – the most natural pairing imaginable. This is most evident in passages where they are at their most restrained and poignant.

Similarly, the three players make the combination of trombone, violin and bass (plus understated electronics) seem entirely logical, and the absence of drums an irrelevance; their music has its own irrefutable logic and pulse, dictated by nothing but the three of them, their interactions and reactions to one another. The quality of their music never wavers, so they maintain an impressively high standard throughout. Altogether, this is two and a half hours of the best improv available. Stunning."

"Violinist Wachsmann recorded these two previously unissued London gigs on cassettes, but the quality is very high, capturing the acoustic qualities of two pub rooms on the Northern underground line. The sounds of glass collecting are very subtle, this mass of exceptional freely improvised music framed by a concentrated listening environment.

The seven extended pieces have an aura of acoustic asceticism. Even though Wachsmann and bassman Guy employ electronics, the effects are quite subtle, invariably used as shading. Unavoidably, trombonist Rutherford stands slightly apart from the stringsters, tending towards linear development of lines that rise above, or sometimes dart playfully between the legs of his compadres.

Wachsmann and Guy are inevitably turned into sonic siblings by their bowing, plucking and landscaping susurrus. Rutherford's rosy glow can shift into a savagely muted grumble, a morose anti-fanfare or garrulous declamation. It's a bullish chamber tussle, calm stasis alternating with lusty bustle, Rutherford bright and prickly, Wachsmann scything, Guy lodging drumsticks or scrubbing brush in-between his groaning strings. There are wildly differing levels of density and intensity. The excitement is palpable."

"I wholly agree with Emanem main-man Martin Davidson that each disc by Iskra 1903 is phenomenal, (British) improv at its best. This is a most impressive, consistently creative and often intense trio who have found their own internal dialogue to present. Throughout most of the second disc, electronics by either Wachsmann and/or Guy are kept to a minimum, used selectively. There are times when the combined drones of either or both bowed strings and trombone create a disorienting alien world. Long live the great Iskra 1903, may their unreleased gems continue to appear."

"Iskra 1903 holds a very dear place in my free improvisation fan’s heart, right beside the Spontaneous Music Ensemble. So it is an incredible joy to see previously unissued recordings of this quality being released in 2014. SOUTH ON THE NORTHERN is a 2-CD set delivering two concerts by the trio’s second line-up (Paul Rutherford, Philipp Wachsmann, Barry Guy) from 1988-1989. This fills a huge a gap in the band’s documentation, a gap that extended from 1983 to 1991. The concert of disc 1, from November 23, 1988, is the best thing I have heard by this band, all line-ups combined: a rich, poignant, thrilling, flawless performance. The concert of disc 2 (April 27, 1989) has a few overlong passages though it definitely remains relevant. The truth is, the concert on disc 1 would make anything else from the group’s discography sound less good if put side by side. That’s how good it is. Highly recommended."

"Though sourced from cassette recordings, the mastering is able to bring out the rich range of the three musicians. The blend of trombone, bass, and violin along with Wachsmann and Guy’s use of electronics for subtle timbral shadings, makes for shifting densities of sound, particularly when compared to the refracted angularity of the trio with Bailey. The improvisations build from the confluence of Guy’s bass resonances, Wachsmann’s subtle wafts and shimmering scrims of arco, and Rutherford’s warm, brassy trombone. But just as integral to the sound of the trio is the confluence of improvisational strategies, melding spontaneous give-and-take, the utilization of melodic kernels and thematic threads, and the invaluable tempering of collective listening. The range of dynamics is critical as well, moving from quiet subtlety to explosive massing. But even as density and dynamics build, there is a strong sense of thoughtful balance, with each of the musicians knowing when to drop back and when to dive in to push the vibrant, constantly evolving tensions of the improvisations. Each set balances longer pieces  at 20+ minutes with pieces in the 15-minute range and what comes through in each set is the telepathic way the trio spins off the improvisations in expansive arcs, finding their way back to clearly articulated conclusions. This is a worthy addition to the Iskra 1903 discography and serves to fill in the picture of the evolution of this trio."