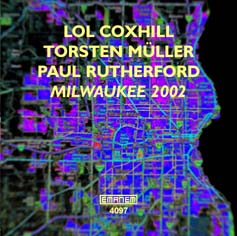 John Corbett and Ken Vandermark decided to invite Lol Coxhill and Paul Rutherford to perform at the 2002 Empty Bottle Festival of Jazz and Improvised Music in Chicago, as they were such important musicians who had hardly been seen in America. The day after their last performance at the Empty Bottle, Coxhill, Müller and Rutherford travelled north to Milwaukee to perform at Woodland Pattern Book Center in one of the Alternating Currents Live concert series. The first half of this concert consisted of three solos - the shorter second half of two duos and a trio. These performances can be heard on this CD in the order they occurred, although some editing had to be done in order to get all the pieces to fit.

I have heard many solo performances by Coxhill and Rutherford over the last thirty-plus years, both in person and on record, yet find these two examples as fresh and inventive as ever. These solos certainly contain several things I have never heard before, and they therefore cannot be dismissed as being just more of the same. I must confess to not having heard Müller perform solo before, but this excellent performance makes me want to hear more.

"First up is the excellent Rutherford solo, and it shows how committed the guy is to expanding his vocabulary. Fans of his will surely have heard his most recent solo epic TROMBOLENIUM, but this piece features a notable departure as it has Rutherford diving slide-first into a new level of multiphonics and vocal effects. It's interesting because Rutherford mastered these sorts of extended techniques long ago - his three solo recordings from the 1970s, only one of which is actually on CD, are ample proof of this - and so he now combines this mastery with close attention to line and quick movements that reveal a serious structural logic. His uses of these resources, as well as the intelligence and sheer likeability of his playing, are in abundant evidence here.

Müller's solo begins quite gently, with long open pauses between almost tentative pizzicato statements that occasionally coalesce into quasi-motifs. The extreme quietude contrasts with many solo bass performances, and in some senses this one recalls the radical work of Mike Bullock. Soft scrapes and mutterings, and the occasional sounds like objects being rolled or dragged on the bridge, make this a pretty unique solo. In contrast, Coxhill's monologue begins with bird-squeaks, chirps, and generally cranky mutterings. It's patient playing, as are the other improvisations, but less likely than Rutherford to follow his linear muse and less reserved than Müller. Some of the cawing and grousing may actually be the most radical thing Lol's done (aside from just being Lol, that is).

The Coxhill/Müller duo takes a few minutes to ramp up, but they find shared space as the soprano specialist bends and twists his notes amid the woody shapes from the bass. The duo between the two Brits is pretty lusty, while the closing trio makes one long for a whole disc's worth of these interactions, filled with fine counterpoint, quizzical gestures, and throaty bar-talking."

"Admirers of all three of these players should be generally pleased with the results. Perhaps strangely, and despite the interlocking personnel, the six pieces seem independent of each other. The first three are each long solo excursions, the longest and probably most impressive by Rutherford, exhibits a remarkable, if primitive technique that continually reinvents itself. With average intonation. fair range, and sloppy attack he nonetheless displays an impressive arsenal, which consists of flutter tonguing, rapid single-tonguing, and intervallic leaps, all of which add to the uniqueness of his sound. Even more importantly, he expresses himself freely, governing the moment, discovering new insights, the results being largely invigorating and rarely tedious. His contributions to the trio are somehow even better and often more inspired, especially on the final track. Bassist Torsten Müller has continued to develop, showing up more and more as a sideman, and he does not disappoint. Müller's heavily percussive approach is best heard at full volume, when he shifts technique mid-stream. Lol Coxhill is one of the continually experimenting British cult players who often fills his recordings with surprises. Though he is in his usual fine form, there is nothing here strikingly new. He is, as usual, eccentric, fluent, and delightfully disjointed, and along with his colleagues offers many pleasurable moments, particularly for those whose idea of a good time is aural skydiving without a parachute."

"First are three extended solos. Rutherford's is once again a fountain of invention, his 22-minute performance constantly moving forward, never looking back. But the stand-out is Müller's solo, mostly because he remains less known. At times he plays the bass like a rubber band, but techniques and tricks aside, what strikes is the articulation and the sense of direction he gives to his solo. Coxhill's piece is fine, but adds little to what can be heard on OUT TO LAUNCH. The sax/bass and sax/bone duets that follow, despite a slightly weak sound capture, contain many strong moments, especially the exchange between Coxhill and Müller, the highlight of the album. Their playing can be described as 'seriously playful'; it has a certain lightness that casually invites you to pay attention. The set concludes with a trio, too short at eight minutes. It feels like they are just warming up to each other when the evening comes to an end."